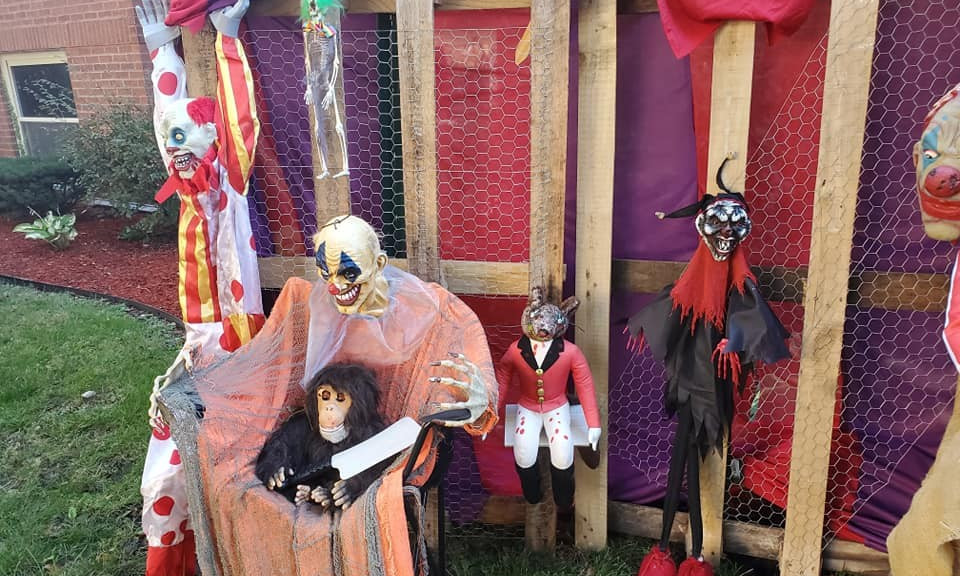 CHICAGO (CBS) — Jessica Bernardi’s yard haunt has been growing in both size and popularity for several years running on Damen Avenue just north of Birchwood Avenue in Rogers Park.

But thieves targeted the “Dead on Damen Avenue” display this week, and Bernardi decided to take the display down.

Bernardi has lived in the Damen Avenue condo building for 10 years, and has been setting up the yard haunt behind the building’s wrought-iron fence for about the past eight. She sets up the display with help from her husband, her kids, and some of her neighbors.

“It started out as really small – dollar store tombstones,” she said.

As the years have gone by, Bernardi has gone on to add an entire graveyard display and spider webs, and the display has just kept growing – and drawing the attention of the neighborhood.

“I get to meet a lot of people – everyone walking by, they all say they look forward to it,” Bernardi said. “Every year, they compliment how much better it looks, this and that. They give you suggestions. It’s a great way to meet people in the neighborhood.”

Last year, Bernardi joined the Chicago Haunt Builders Facebook group, and “Dead on Damen Avenue” also made a seven-page list of haunts in Chicago and the suburbs. This year, there was also a Facebook page for “Dead on Damen Avenue,” and Bernardi set up a contest where a winner could help design a tombstone for the display. She also asked for donations to the youth advocacy nonprofit My Block, My Hood, My City.

Meanwhile, the display this year grew to its biggest size yet. It spanned the front yard of the Damen Avenue condo complex.

The display was complete with a circus display with sinister clowns, a voodoo display, a haunted nursery with macabre dolls, and even a couple of animatronic props this year.

“This year, I made all of the tombstones that we had out there – just over a dozen,” Bernardi said.

But this week, all of that progress was ruined when thieves targeted the display.

“I got back into town Monday afternoon, and of course, you know, I’m going out to check everything,” Bernardi said, “and I noticed that in our back-alley circus, the mannequin’s mask was gone and the wig, and I found the wig, but the mask was gone.”

Bernardi said she didn’t notice anything else at the time, but it turned out the following morning that there was more damage. She said she got up Tuesday morning to fix and add to some of the displays, only to find some of the skeletons had been bent over after the thieves had ripped off their masks and hats.

The thieves also took a doll depicting the Pinhead character from “Hellraiser” from the haunted nursery, Bernardi said.

“All of those babies either me or my husband or my children made, and the neighbors’ children,” she said.

Earlier this week, CBS 2’s Jermont Terry reported on a woman who was caught on camera stealing a Halloween display from a front yard in Midlothian, and then jumping into the passenger side of a car and leaving. When it comes to catching the perpetrators on camera, Bernardi was not so fortunate.

She said one of her neighbors has a Ring doorbell camera, but it is down at the other end of the building – far from where most of the thefts occurred. Bernardi also said she did not witness anyone taking the items, adding that it happened sometime at night and all the gates were locked when she went out in the morning.

So without any security cameras or other safeguards, Bernardi said she decided to take the display down.

“Yesterday was rough day,” Bernardi said Wednesday afternoon. “I started bringing everything in and I was just really sad and upset.”

“Dead on Damen Avenue” is done for this year, and Bernardi said it will not return until she can get security cameras and “try to have some sort of deterrent.”

She said some members of the Chicago Haunt Builders group said they would help reconstruct the display, but as it is, there would be nothing to stop thieves from striking again – since they had such an easy time earlier this week.

“So this year, everything has been brought in,” Bernardi said.

The lifelong Rogers Park resident said thieves have never targeted her Halloween display before this year.

“I’ve had it up for years. Nobody ever bothered anything,” she said. “It brought nothing but joy and fear to people.”

Bernardi said neighbors have been stepping in to help in the wake of the thefts. One neighbor has set up a GoFundMe in the interest of replacing the stolen and vandalized items and getting a security system mounted.

After those goals are met, further donations will go to My Block, My Hood, My City.

Bernardi added that she was planning to report the thefts to police later Thursday.