CHICAGO – When the first shipments of the Pfizer vaccine arrived in the U.S., they landed in Chicago.

Every day, thousands pass through the doors and gates of O’Hare International Airport.

But in a pandemic, with flights cut way back, there are more workers in the terminals these days than passengers. Still, the activity has not stopped.

On the other side of the airport, it has ramped up at United’s cargo facility.

“Where we saw a significant drop in the number of passenger flights, so did the whole industry,” said Managing Director of Cargo Chris Busch. “What we did was put in the cargo-only flights.”

Since the spring, Busch has been living the pandemic through a much different lens.

With the first COVID-19 vaccines given out in the U.S. on full display this week, WGN News was granted access to see how vaccines will be moved around the world and across the country.

“We’ve been moving pharmaceuticals for over 10 years, so it’s not really a new thing for us, it’s just a higher profile right now,” Busch said.

Since the first shipment of the vaccine from Belgium to Chicago two weeks ago, United has handled five more flights containing the COVID-19 vaccine.

“Those flights that came in from Brussels, 40 they parked right behind the facility here,” Busch said. “So that was the key thing is we were able to bring them in, unload them, bring them in, break them down and on a truck. The whole process took less than an hour from the time that airplane blocked in behind our facility until the truck was gone with the vaccines.”

Now Boeing 777 airplanes arriving to the facilty have the ability to carry more dry ice, which is needed for the Pfizer vaccine. 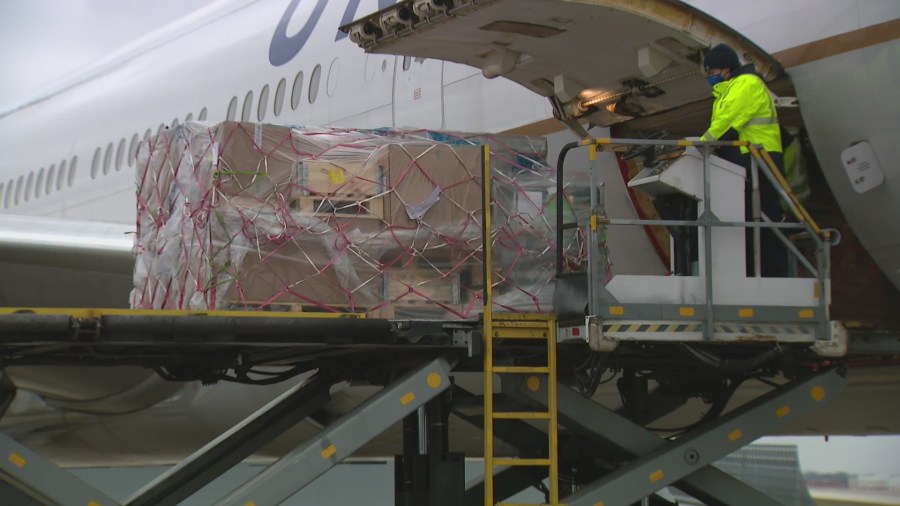