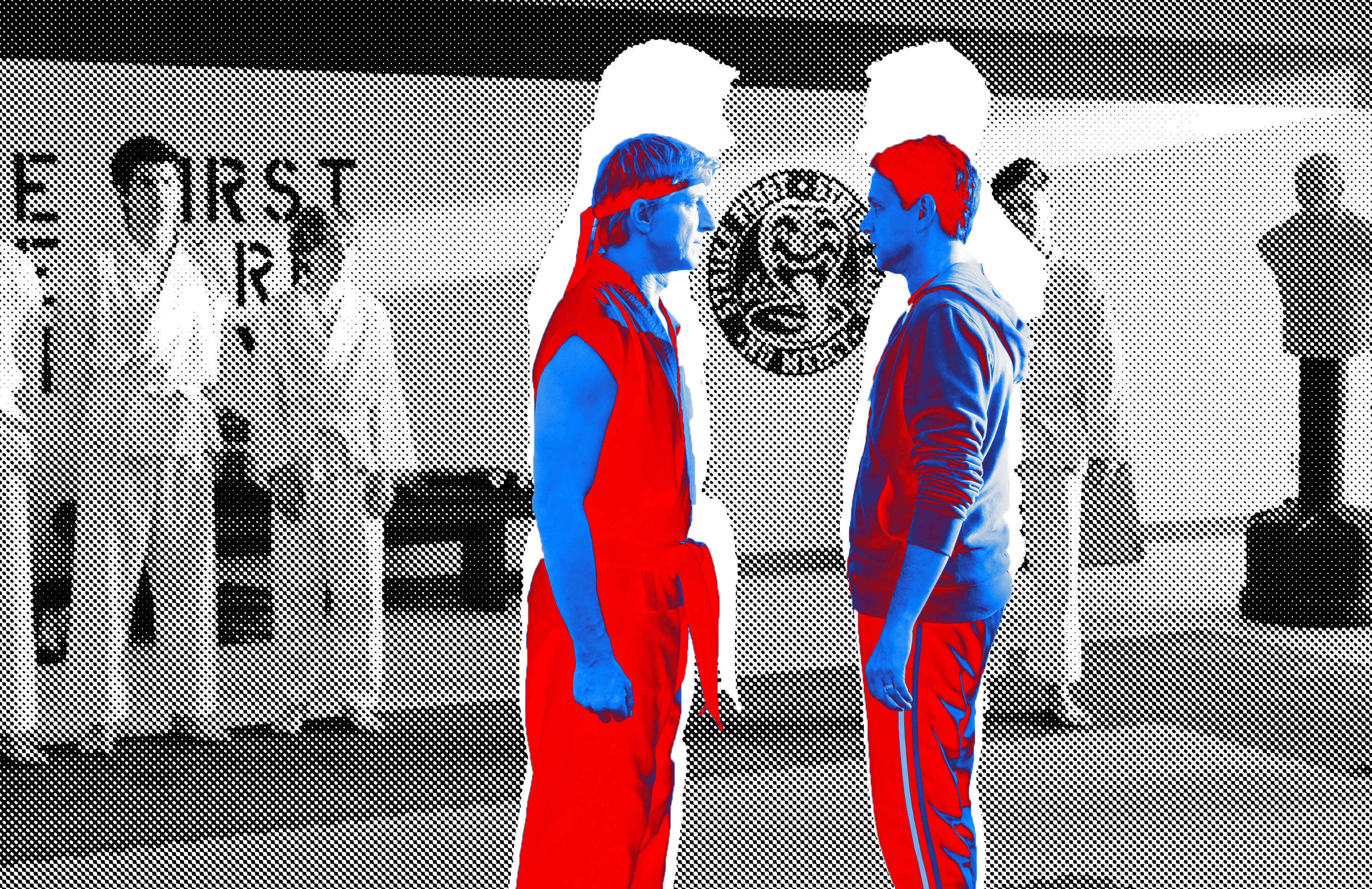 This past month, the third season of Cobra Kai was released on Netflix.  The show continues the story of Daniel Larusso and Johnny Lawrence, two karate kids from the original Karate Kid movie of 1984 (which is the only good thing on TV in reference to 1984).  And, well, I love it.  It helps that I was raised in Karate and Judo, but one need not be a martial artist to get hooked.  The secrets to the show’s success are in its key ingredients: Cheese, grit, spice and nutrients.

If you did not grow up with the Karate Kid or are older than twelve you may find Cobra Kai difficult to appreciate.  Much of the show is homage to the original films, which being 80’s flicks are hammy and reductive, the good guys are very good and the bad guys are very bad.  Yet the show gives those of us over forty a brilliant way of feeling like kids again.  Something gets triggered (in a good way), when you see characters continuing a story you are familiar with from your youth.  We can indulge in all the inside jokes and now our kids are the ones outside the loop.

I cannot think of any other show that reconnected with its fans nearly forty years later and as such, it is like seeing an old friend.  The show routinely makes fun of itself, while never compromising on core principles like honor, respect and grit.  This is one of its secrets.  A good friend of mine once told me he aspired to “take life seriously, but never himself too seriously.”  In today’s world you see the opposite, opportunists constantly take themselves very seriously: They want to be thought of as brilliant, epic, one of a kind and a moral tribune.  But in fact, more often than not, most of this persona is merely a form of branding.  Branding is for people more concerned with themselves than the world.  Cobra Kai never takes itself too seriously, but always takes principles seriously.

On another level, the show works because it is action packed.  Elements of Romeo and Juliet, combine with The Matrix to yield constant tension and romance.  The fighting scenes are well choreographed and bold.  Some scenes are so action packed, they border on the ridiculous.  But again, this is why Cobra Kai works; the show owns what it is trying to do.  You want a fight?  How about a fight involving twenty-some students at the local high school?  Fortune favors the bold and the show-runners have not been shy in giving viewers what they want, action.

But the original Karate Kid was an incredibly popular film, because it possessed heart, Daniel had to learn how to fight, defend himself and overcome fear.  The movie possessed character; Mr. Miyagi represented fatherhood, guidance and wisdom.  Many of these things are absent in today’s world.  Kids are now more likely to be taught to ‘tell a teacher’ than defend themselves.  Cowardice, once loathed, is now simply a personality trait.  And people think wisdom is some 20-year old tweeting platitudes.  Cobra Kai continues the tradition of the original film.

Like a time machine, Cobra Kai essentially transports Johnny Lawrence, the original Karate Kid villain, into 2019 and allows us to see this new world through his eyes.  Even though Johnny is older, he is still in many ways the same guy; tough, committed and disciplined (other than all the drinking).  Johnny soon starts his own dojo, named Cobra Kai and begins teaching students.  Watching Johnny interact with students in the 21st century is hilarious; they are timid, weak and allergic to everything, something Johnny cannot understand.  But the show is not shy about one thing, Johnny’s teaching methods, however politically incorrect, have a net positive effect on the kids.  They gain more confidence, focus and friendships, not to mention the health benefits of physical exertion.

It would be tempting to think that Daniel Larusso is the antithesis to Johnny Lawrence, but he is not, he is a continuation of the same values.  Though Daniel is kinder and Johnny is a bit of an asshole, they are committed to the same core principles; do not give up, work hard and never give in to fear.  And this is the brilliance of the show and the martial arts quite frankly; it is a sphere where two men who are very different can at least respect the higher, more universal values of bushido.  In today’s America, there are no more universal values and thus mutual respect is endangered; there was a time when universal values did not mean conformity, it meant wisdom.

Wisdom is taught; it is the collective knowledge of our past.  It allows us to respect a mother or father, or man or woman, who are different than us because we recognize they love their kids; their families, their work and they extend respect to others who do the same.  Can you imagine if I thought of you as a mother or father, son or daughter, rather than a Republican or Democrat, Conservative or Liberal?  Toughness is also taught, no one is born with it; children need guidance to learn how to battle it out and stand up for themselves.  Now we elevate whining, as if it is some type of insight into the world, while also asking the world to stand down, while the kid sits down.  Sorry, your kids will have a tough time if that is your approach.  I recommend you have them watch Cobra Kai for a few lessons.