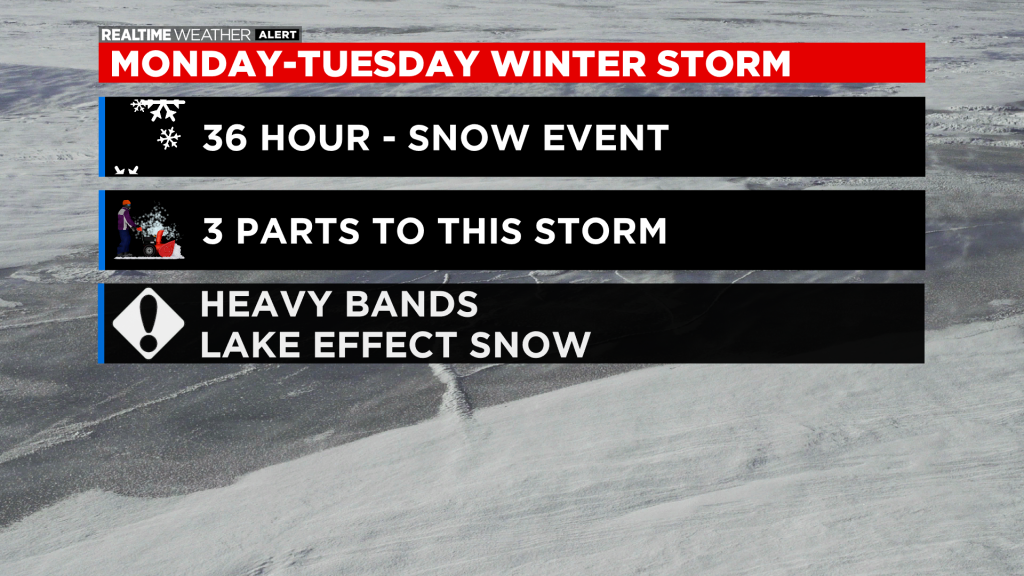 CHICAGO (CBS) — A winter storm headed for Chicago on Monday and Tuesday looks to be super-sizing in several ways.

CBS 2 Meteorologist Tammie Souza reported it will be a long-duration event over 36 hours with three main components between Sunday night and Tuesday morning.

Some narrow parts of the area, specifically in Cook County, could see upwards of 12 inches of lake-effect snow. From Sunday night through 6 p.m. Monday, expect snow showers with brief bursts of heavier snow – amounting to 1 to 3 inches. This could make for slippery roads and accidents.

Beginning at 6 p.m. Monday and continuing through Tuesday morning will be the main body of the winter storm, with 3 to 5 inches of additional snow. It will make for a terrible late-evening commute.

Then, there will be lake-effect snow bands all day Monday, Monday night, and Tuesday. These will waver along the Illinois lakefront and into eastern Will and Kankakee Counties and an additional 3 to 5 inches on top of everything else will fall in areas closer to the lake.

Those higher totals will be in narrow bands and not the entire county.

A Winter Storm Warning is in effect for Cook County from 3 a.m. Monday until noon Tuesday. A Winter Storm warning also begins at 6 p.m. Sunday for eastern Will County, Kankakee County, and Lake, Porter, Jasper, and Newton counties in Indiana, as well as Illinois and Indiana counties farther south.

A Winter Storm Watch has been issued for the rest of the area, with a forecast for 2 to 4 inches of snow. The Department of Streets and Sanitation on Sunday evening had already activated a Phase II response, deploying 211 snow plows and sat spreaders to main Chicago roads and Lake Shore Drive.

Air travel, roads, and schools could be affected Monday night into Tuesday. The snow comes amid dangerously cold temperatures. Overnight lows Sunday night into Monday will range from zero to the negative range.

On Tuesday, the snow tapers off in the morning with mostly cloudy skies lingering. On Wednesday, we reach the 20s with a few peeks of sun.

We don’t see any chance of temperatures above the freezing mark until next Sunday.

those in need of services or access to warming, or who are experiencing insufficient heat, should call 311 or go to 311.chicago.gov.

A total of 74 Chicago Public Library locations, as well as Chicago Park District and Department of Family and Support Services Buildings, will be open as warming centers this weekend.

The Renaissance Court at the Chicago Cultural Center will also be open as a warming center through Thursday, Feb. 11, with hours of 11 a.m. to 4:30 p.m.

Chicago Police district stations will also be open 24/7 as warming centers. Face masks are required at all sites.