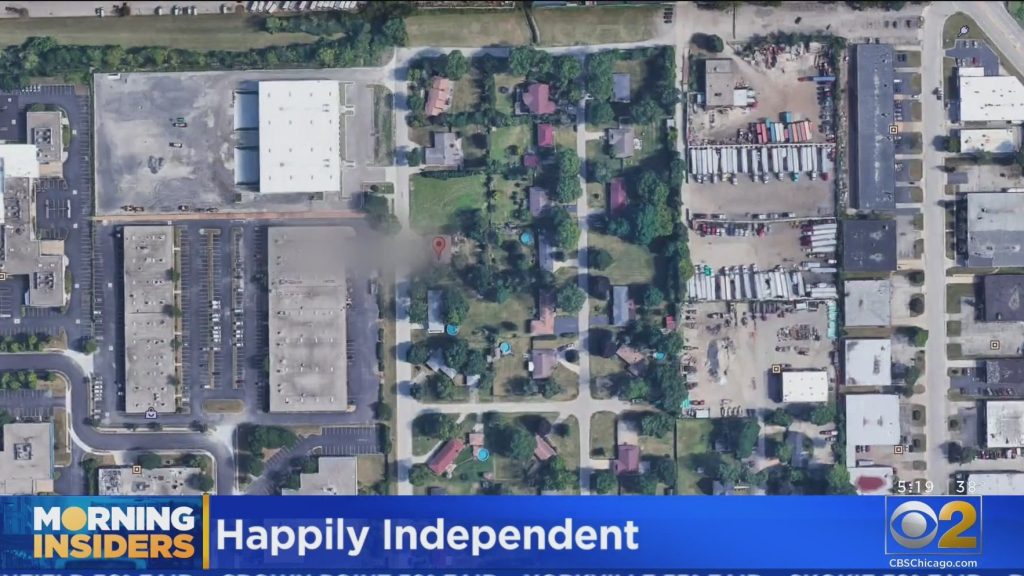 ELK GROVE TOWNSHIP, Ill. (CBS) — Dozens of homeowners living near O’Hare International Airport tell us they’re living in limbo, not wanting to spend money to fix up their homes.

The reason? They fear a bill moving through Springfield is a scheme to allow Elk Grove Village to take their property.

The Ropollo subdivision, where Maldonado’s lived for 17 years, is on unincorporated land.

“I mean we do have rules, Cook County rules,” she said.

The 36-acre community may be independent of any municipality, but residents fear they’ll lose their freedom if Elk Grove Village annexes their land.

“We’re just sort of used to living the way we have; and so our taxes will increase, we’re going to have to make changes with water and sewer,” said Maldonado.

“It proves to me that [Mayor Craig Johnson has] always wanted us,” said Jablonski, pointing to paperwork that shows Ropollo subdivision under a heading “Residential Developed [sic] To Be Annexed.”

Elk Grove Village Manager Ray Rummel and Mayor Johnson assure CBS 2 that the municipality has no intention whatsoever of forcibly taking over properties in the neighborhood.

The homeowners don’t buy it.

Village leaders also confirmed to CBS 2 a strong interest in a proposed state law that would clarify language about annexation procedures.

The bill’s sponsor, state Rep. Marty Moylan (D-Des Plaines) said the proposed law’s intent is to clear up confusion after an annexation in Will County was denied by a judge – and later overturned in appellate court.

“This [legislation] could affect further annexations down the road for other towns, and this town, but we have no plans – Elk Grove Village has no plans – to annex any part of anybody’s personal property right now,” said Moylan, who represents Illinois’s 55th District, which includes Elk Grove Village.

“Senate Bill 658 does not relax the guidelines local governments currently have to adhere to when annexing properties. Recent court rulings have thrown existing statutory requirements into confusion, making it harder not only for municipalities to follow these requirements, but also for residents to know whether their government’s annexation decision is legal. Senate Bill 658 would clarify the laws already in place, providing straightforward language for governments seeking annexation and for residents keeping a check on their local governments,” said Murphy in an emailed statement to CBS 2.

Back in the subdivision, suspicions abound.

“There’s a lot of sleepless nights,” said Jablonski who believes the Village is behind a failed attempt in recent years by developers to buy out her neighbors, then ask Elk Grove Village to take the over and provide services. This could then be considered a voluntary annexation.

“It’s just an ongoing fight,” said Jablonski who sits on the community board that won against that developer in court.

The pending legislation has these homeowners worried all over again.

Mayor Johnson said the legislation is Springfield has nothing to do with Ropollo subdivision and would not affect property there.

Johnson also vehemently denied being in cahoots with any developers. He said 50 or 60 of developers have approached his administration about that plot of land over the years and that, yes, the Village would support the building of an industrial building there, but first a developer must control all the property.

As it stands, a land covenant by homeowners in the Ropollo subdivision dictates the land must stay residential.