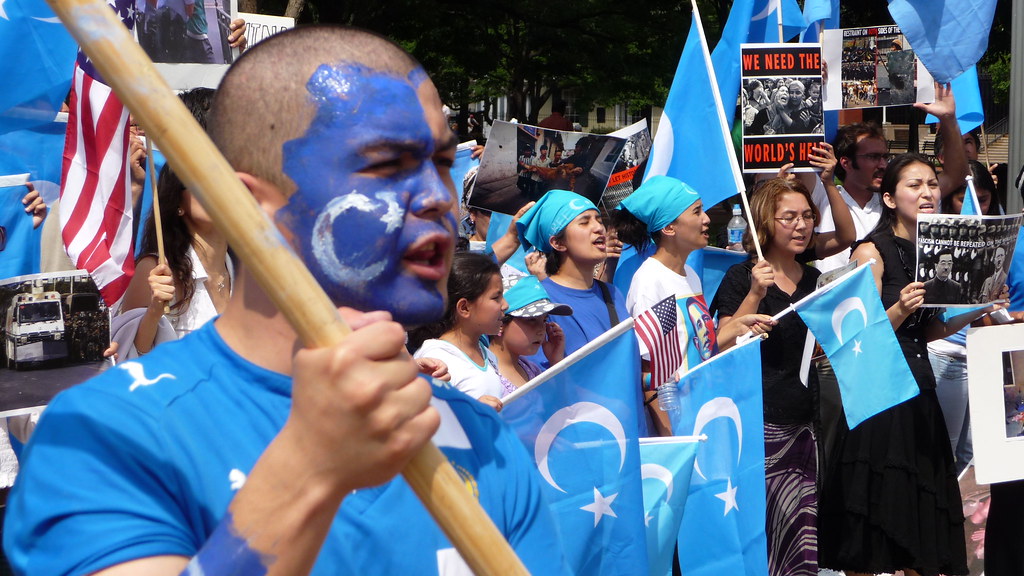 On January 19, 2021, the last full day of the Trump administration, Secretary of State Mike Pompeo officially determined that China’s treatment of Uyghurs, Muslim minorities in the Xinjiang province, amounted to a “genocide.” Pompeo made the declaration on Twitter in addition to releasing an official statement via the State Department that announced: “Our exhaustive documentation of the PRC’s [People’s Republic of China] actions in Xinjiang confirms that since at least March 2017, local authorities dramatically escalated their decades-long campaign of repression against Uyghur Muslims and members of other ethnic and religious minority groups […]. I have determined that the PRC, under the direction and control of the CCP [Chinese Communist Party], has committed genocide against the predominantly Muslim Uyghurs and other ethnic and religious minority groups in Xinjiang.”

“Uyghur,” also commonly spelled “Uighur,” is the name of a Turkic-speaking, mostly Muslim ethnic group native to China’s Xinjiang region consisting of over 10 million people. As Pompeo noted, there has been strong evidence of mass atrocities occurring against Uyghurs in Xinjiang since at least early 2017. According to the Council on Foreign Relations, the Chinese government has imprisoned up to two million Muslims in Xinjiang internment camps. The Chinese government describes the hundreds of camps as “vocational training centers” aimed to “re-educate” Uyghur Muslims and combat extremism without violating human rights yet evidence suggests otherwise.

Information about the camps has been hard to come by but a series of government leaks and testimonies from escapees paint a picture of an oppressive system of detention characterized by brainwashing and mass surveillance. Prisoners are forced to renounce Islam, eat pork and drink alcohol, praise communism, pledge loyalty to the CCP, and learn Mandarin. Torture, sterilization, and sexual abuse are unfortunately common practices, resulting in many detainees contemplating or committing suicide.

One inmate who managed to be released to Kazakhstan explained that his detention was based solely on his religious identity and that he faced endless brainwashing and humiliation. He said that those who refused to participate in “re-education” efforts were placed in handcuffs and ankle cuffs, and further disobedience resulted in waterboarding or being strapped to a pain-inducing metal contraption called a “tiger chair.” In 2019, drone footage was posted online anonymously that appears to show hundreds of Uyghurs blindfolded, shackled, and wearing identical vests sitting in rows on the ground after being taken away from a train. The Chinese government maintains that the centers are a tool to help fight extremism in the province and help individuals assimilate to Chinese culture yet they have refused to allow the UN Human Rights Office or other foreign investigators to tour the area.

The designation of genocide made the United States the first country to officially label the abuses in such terms, although world leaders have been condemning the actions and the UN has repeatedly demanded access to the camps. A report completed in March by Newlines Institute found conclusively that China breached the UN 1948 Genocide Convention and “bears State responsibility for committing genocide against the Uyghurs,” clearly outlining an unfathomable list of violations and “repeated destructive acts.”

The U.S. government first took significant action on the Uyghur crisis in 2020, months prior to the State Department’s declaration. The Uyghur Human Rights Policy Act of 2020, which authorized sanctions on “foreign individuals and entities responsible for human rights abuses in China’s Xinjiang Uyghur Autonomous region,” was signed into law by President Trump on June 17, 2020. The bill passed the Senate by unanimous consent and passed the House in a 413-1 vote.

Beijing reacted to the passing of the bill by threatening retaliation for enacting a law aimed at “harm[ing] China’s interests and interfer[ing] in China’s internal affairs,” as described by China’s Foreign Ministry. The Ministry said that a failure to revoke the law would cause China to “resolutely take countermeasures, and all the consequences arising therefrom must be fully borne by the United States.”

On the same day that the bill was signed into law, an excerpt from a book written by John Bolton, Trump’s former national security adviser, was published in the Wall Street Journal, accusing Trump of encouraging the mistreatment. Bolton alleged that during a conversation together at the G-20 meeting in June 2019, after China’s President Xi Jinping explained why he was building the concentration camps, President Trump told him to continue building the concentration camps and that it was the right thing to do. President Trump denied the claims and called Bolton a liar.

However, later that same week, President Trump said in an interview with Axios that he held off on sanctions because he did not want to disrupt the trade deal he was working on. Some members of Congress were reportedly upset that Trump had not imposed sanctions on Chinese officials and aimed to use the bill as a way to pressure Trump to do so. While the bill ultimately authorized sanctions, the Uyghur crisis was not officially considered a genocide until Secretary Pompeo’s announcement in January.

Because of the timing of Pompeo’s declaration and his refusal to make the same declaration regarding Myanmar’s treatment of the Rohingya Muslim minority group, critics have labeled the declaration to be a politically-charged move aimed at taking a parting shot at China and tying the Biden administration’s hands in regards to foreign policy with the nation. Nonetheless, it marked a major development amidst escalating tensions in US-China relations in recent years and forced the Biden administration to address the genocide in a timely manner.

On the campaign trail, well prior to Pompeo’s declaration, the Biden campaign spoke out strongly against the genocide. In a debate in December 2019, Biden called for sanctions against China due to their treatment of Uyghurs. His campaign also said in a statement from August 2020 that “[t]he unspeakable oppression that Uighurs and other ethnic minorities have suffered at the hands of China’s authoritarian government is genocide and Joe Biden stands against it in the strongest terms.”

Similarly, the Biden administration made clear upon entering office that they agree with Secretary Pompeo’s characterization of the Uyghur crisis as a genocide. At current Secretary of State Antony Blinken’s confirmation hearing, Blinken stated that he agreed with Pompeo and that “on the Uyghurs I think […] all of [their actions] speak to an effort to commit genocide.” On January 27, the day after he was sworn in, Blinken similarly maintained that “[m]y judgment remains that genocide was committed against the Uyghurs and that hasn’t changed.” President Biden also directly addressed the genocide in a call with Chinese President Xi, who urged the U.S. to not get involved with the internal affairs of China.

In clear contrast to former President Trump, who said very little publicly about Xinjiang, President Biden has not been shy about speaking out against the human rights violations since taking office; however, that has not shielded him from criticism as well. A New York Post article titled “Biden dismisses Uighur genocide as part of China’s ‘different norms’” took issue with Biden’s use of language during a CNN Town Hall in February, sparking outrage from many. The full transcript, however, shows that contextually, Biden was not dismissing the Uyghur genocide as part of the different norms of China. Rather, the “norms” he was referring to were the understanding that the President of the U.S. has a duty to speak out against human rights abuses.

Words can only do so much, however, and the Biden administration has yet to take many concrete actions in response to the genocide, focusing Biden’s first couple of months on his American Rescue Plan. Although Biden’s agenda is now dominated by his American Jobs Plan and American Families Plan, with the American Rescue Plan passed there is optimism that the Biden administration will ramp up efforts to punish Beijing for its atrocities.

One clear option to do so economically. Prior to leaving office, the Trump administration announced a ban on all imports of cotton and tomatoes from Xinjiang, citing forced labor. The Foreign Ministry of China has made clear that the ban has hurt China economically, prompting calls to take further action. In March, the U.S. and its allies—including Canada, the United Kingdom, and the EU—announced sanctions on several Chinese officials who have allegedly been involved with the atrocities.

The next logical step seems to be for Congress to pass the Uyghur Forced Labor Prevention Act, which passed the House last year but never received a vote in the Senate. The bill, which would ban imports on all goods whose supply chains touched Xinjiang unless there is proof that no forced labor was involved, was recently re-introduced in both the House and Senate with bipartisan sponsorship. A Pew Research study found that 70% of Americans support “try[ing] to promote human rights in China, even if it harms economic relations with China,” including 72% of Republicans and 69% of Democrats. In addition to that bill, a bipartisan resolution was also introduced on April 14 in the House Foreign Affairs Committee that condemns the genocide and calls upon Biden to refer these atrocities to the United Nations, lead efforts to invoke multilateral sanctions, and take all possible actions to bring the genocide to an end.

It remains to be seen whether the Biden administration will take further action in support of universal human rights to punish China for one of the worst atrocities in recent history. Looming in 2022 is the Winter Olympics, set to be hosted in Beijing; while nothing is imminent, there have been murmurs of a possible boycott as human rights activists call on the U.S. to demonstrate leadership. An editorial by the Washington Post strongly suggested that to attend the Olympics “when the Xi regime is actively seeking to destroy a group of more than 12 million people would be unconscionable.”

Numerous politicians—including Pompeo, who is thought to be eyeing a Presidential bid in 2024—have expressed support for a boycott. Others, like Senator Mitt Romney (R-Utah), have suggested an “economic and diplomatic boycott” as an alternative, saying that boycotting the games entirely would unfairly punish American athletes. In February, White House Press Secretary Jen Psaki stated that “a final decision” hadn’t been made on the matter, leaving the door open for a possible boycott. On April 6, however, the State Department casted doubt on the possibility of a boycott, stating that they have had no discussions with allies about a joint boycott. A Chicago Council survey conducted in March found that the American public is split on the issue, with 49% of Americans favoring a boycott and 46% opposed.

Unilateral action by the United States would likely prove ineffective but history shows that when the U.S. leads, other countries follow. In the last few months after Pompeo’s statement, several legislative bodies have declared that China is committing genocide, including the UK House of Commons, the Dutch parliament, and the Canada House of Commons. It is now up to the Biden administration to decide just how far it wants to go in retaliating and demonstrating clear and strong support of human rights across the globe.