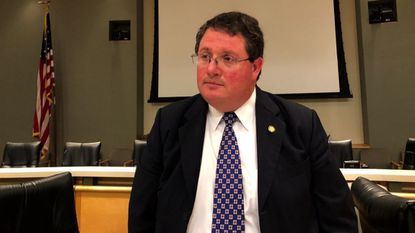 By now the country has become accustomed to the meme about “Florida man.” A recent Google search of “Florida Man headlines” returned 71,300,000 results with links titled, “20 crazy Florida Man headlines that made the meme what it is,” “60 Times Florida Man Did Something So Crazy We Had To Read the Headline Twice,”  on and on. Now there is another Florida man making headlines: Randy Fine, the anti-Muslim Republican member of the Florida House of Representatives.

Randy Fine represents the 53rd district of southern Brevard County. A former gambling executive, he was first elected in 2016 and reelected in the years 2018, and 2020 defeating Democratic challenger Phil Moore both times.

Fine has a real way of embarrassing southern Brevard and making it seem like a backward bastion of racism and Islamophobia. During the recent universally condemned massacre of Palestinians by the Israeli military he couldn’t contain his deep seated hatred for Muslims, Islam and Palestinians.

He not only supported Israeli apartheid and war crimes against Palestinians but when asked by Christopher Johnson about Palestinian rights to defend themselves against “Israelis bullying and forcing them out of their homes” responded with the hashtag “#BlowThemUp.” That’s right, a chickenhawk Florida politician demanded the military of a foreign nation bomb, murder, kill innocent civilians. 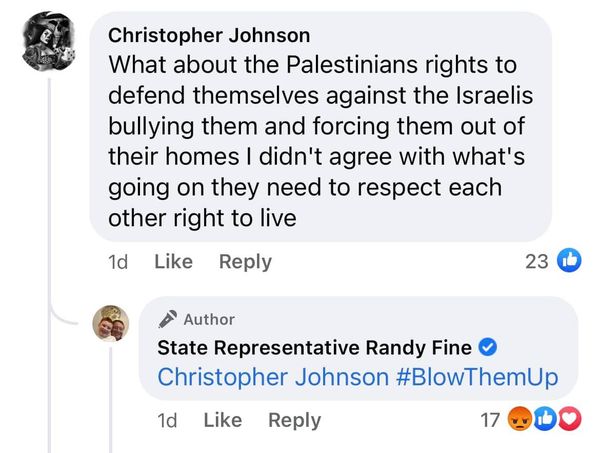 As you can see Fine seems to think he can spread hate speech and incite violence no matter how generalized, stereotypical or bigoted on social media and get away with it. During Israel’s bombing of Gaza he also urged it to use disproportionate force, describing Palestinians as “animals” and generalizing the religion of two billion people around the world with terrorism hashtagging his post with “#NoMercy.”

What makes this all the more egregious is that his profile picture shows him with his son but he has no qualms about reveling and supporting “maximum force” against innocents including many children because they are not his race or religion; the definition of a supremacist, religious extremist.

In another post he takes aim at the first amendment rights of protesters to peacefully assemble and oppose Israeli state terror, conflating protests against Israel’s war on Gaza, land theft and colonization with anti-semitism: 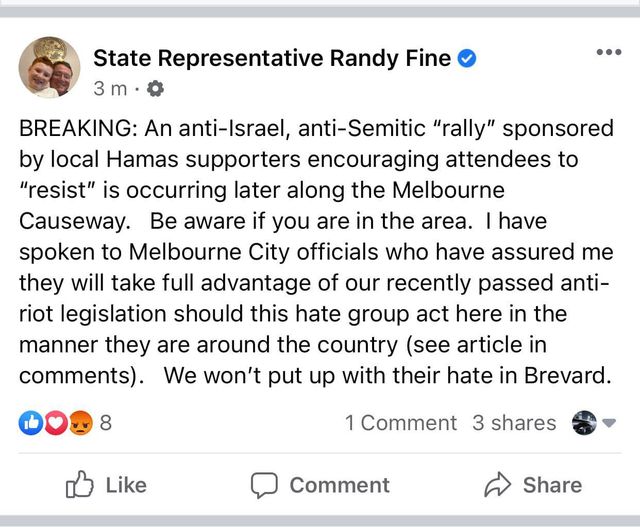 One would expect a legislator to focus most of his energy on the business of serving his constituents but a cursory glance at his latest activity on Twitter shows that his priorities lie not in serving them but attacking Muslims and Islam.

From May 22 until June 13th, 20 of the 26 tweets from his account have been about Islam, Muslims, Muslim politicians, Palestinians and civil rights groups. In some of these tweets he explicitly generalizes about Muslims and revels in undermining peaceful protests by employing lawfare against them: 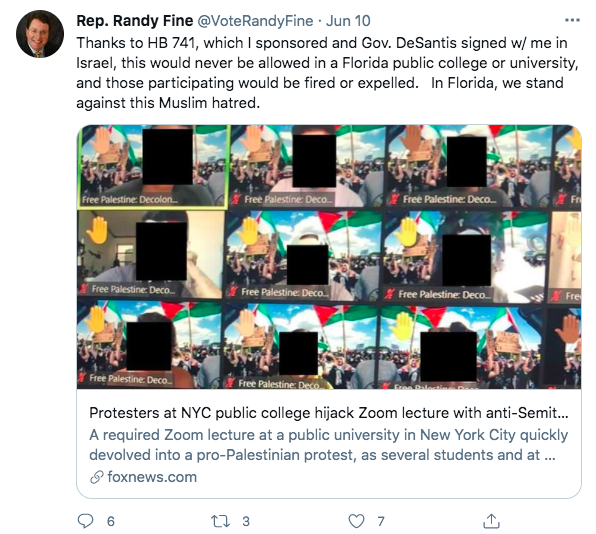 These are only a sample of some of the unhinged, unbefitting tweets and posts by a Trump-esque Florida Republican. One wonders: does Randy Fine represent the people of southern Brevard County or the Likud Party of Israel?

Southern Brevard do you support this bigotry? Florida, is a politician who demands innocents be blown up, opposes peaceful protests, incites a foreign nation to indiscriminately and disproportionately use force against the norms of international law have any business being in political office? Or is this just another addition to the “Florida man” meme; an example of a sleaze ball politician who spreads hate, and undermines democracy unchallenged?