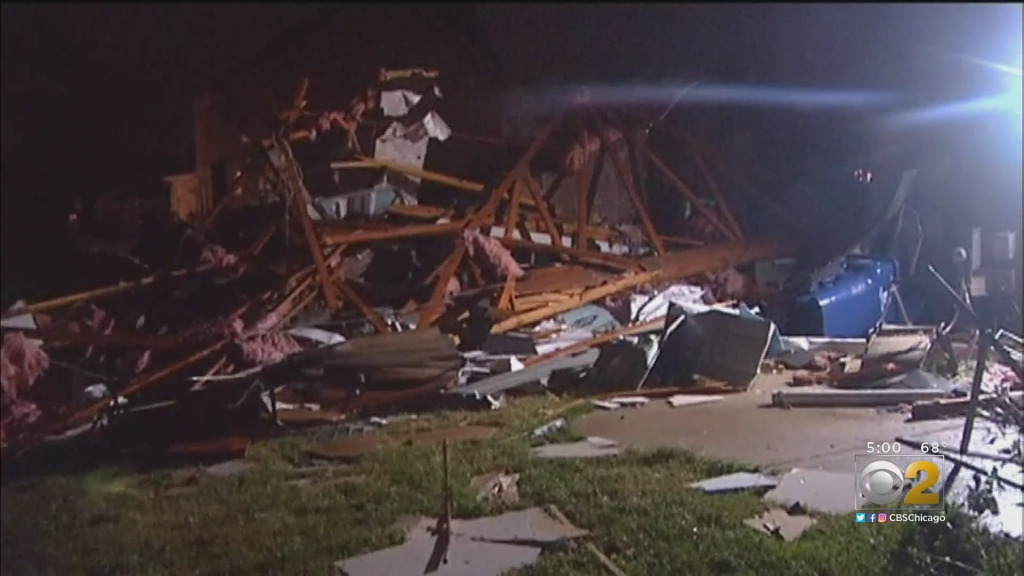 CHICAGO (CBS) — Severe and dangerous thunderstorms brought a tornado to the ground late Sunday night and brought heavy rain and dangerous wind to the entire Chicago area. Monday morning, residents in Naperville and Woodridge area waking up to extensive damage after a tornado touched down.

Over 20,000 ComEd customers are experiencing power outages. Crews are working to restore power.

As of 8am, more than 20,000 ComEd customers are experiencing outages due to the severe storm that has recently left our service area. Our crews are in the field assessing damage & working to restore power. Visit https://t.co/uVFkhfjO14 for estimated restoration times pic.twitter.com/g6FcJFoWCu

More photos Monday morning of the extensive damage in the Ranchview and Princeton Circle neighborhoods in Naperville. There were 130 homes damaged by the tornado.

A home in Princeton Circle in Naperville was completely leveled by the tornado. A total of 130 homes were damaged, according to the fire chief.

CBS 2’s Meredith Barack reported one person is in critical condition and 10 families were displaced in Naperville due to storm damage.

The fire chief addressed the damage residents are waking up to Monday morning.

Currently Lemont Rd is shut down to all traffic from 75th to 83rd Street. There is no estimated time of re open at this time. Please use alternate routes in the area.

The entire side of a home was ripped off in the Ranchview neighborhood in Naperville. The fire chief said there were no explosions.

NAPERVILLE TORNADO: The entire side was ripped off this home in the Ranchview neighborhood. The fire chief says this was the epicenter of the tornado that hit overnight. The latest coming up at 4:30. @cbschicago pic.twitter.com/Vem340BsC3

1 a.m.: About a dozen homes were damaged, and four people were rushed to area hospitals, after the tornadic storm touched down in Naperville. Fire Chief Mark Puknaitis reported about 12 homes sustained wind and tree damage. Six people were injured, but their injuries were minor at the time.

Four of those six people had to go to the hospital. Tree limbs were also down at the scene, debris was strewn about, and windows were broken on many structures.

Puknaitis said anyone who was displaced from their homes may go to Ranchview Elementary School, which has been designated as a place of shelter. The Naperville City Emergency Operations Center is also open, and emergency management authorities are coordinating in case there are others who are injured.

12:35 a.m.: The Chicago Office of Emergency Management and Communications notes that a flood advisory is in effect until 3 a.m.

NotifyChicago: A Flood Advisory is in effect for Chicago until June 21 at 3:00AM

12:33 a.m.: Heavy rain left the Stevenson Expressway flooded near Kedzie Avenue. Motorists are advised not to drive through flooded roadways, as your car may be more buoyant than you realize.

12:31 a.m.:Viewer David Vox Mullen sent us this video from Naperville. He reports it was taken just before the tornado touched down in the area.

12:30 a.m.: Viewer @American.Craft sent us this video from the Olympia Park/Edison Park area. Warning sirens are sounding as the storm hits.

12:25 a.m.: A large tree fell through a mobile home at Camelot Estates in Porter, Indiana, a storm spotter reports. Meanwhile, the Lake County, Indiana 911 Center is down, but radio traffic is working.

12:23 a.m.: A new tornado warning has been issued for LaPorte County south of Michigan City. Tornado warnings are also being issued for southwest Lower Michigan. Meanwhile, heavy rains persisted in Will and Kankakee counties.

12:16 a.m.: Another new tornado warning has been issued for Porter County over Chesterton, Indiana, moving east at 60 mph.

12:13 a.m.: The fire department in Naperville has requested a rescue box alarm to Princeton Circle, where the gas leak was reported in the wake of the storms. Four ambulances were headed to the scene with more on the way.

12:03 a.m.: A new tornado warning has been issued for east Central Will County in Illinois and Lake County, southwest Porter County, northeast Newton County, and northwest Jasper County in Indiana. Strong winds were rolling through from St. John to Beecher to Peotone.

12 a.m.: Debris from trees was seen along Woodridge Drive near Crabtree Avenue in Woodridge, near where the tornado was reported. A very large tree also looked like it might have snapped and fallen over.

11:54 p.m.: Photojournalist Alfredo Roman reports a major police and fire response has been called to Princeton Circle in Naperville. This may be where the gas leak was reported.

11:52 p.m.: A new severe thunderstorm warning has now been issued for central Will and southeast Cook counties until 12:15 a.m.

11:42 p.m.: CBS 2’s Steven Graves is headed to Woodridge where tornado damage has been reported. He reports the visibility on southbound I-55 is terrible.

RIGHT NOW We are headed to SW Suburban Woodridge where tornado damage has been reported.

11:48 p.m.: All tornado warnings have been dropped, but many severe thunderstorm warnings remain in place. Three people were injured and a gas leak was reported in Naperville, and heavy rain was falling throughout the area.

11:25 p.m.: A large and dangerous tornado has been confirmed in the southwest suburbs, heading east along 75th Street from Woodridge.

11:20 p.m.: A new tornado warning has been issued for northwest Will, southern DuPage, and south central Cook counties.

11 p.m.: A gate hold is in effect at O’Hare International Airport amid dangerous storms and a tornado warning.