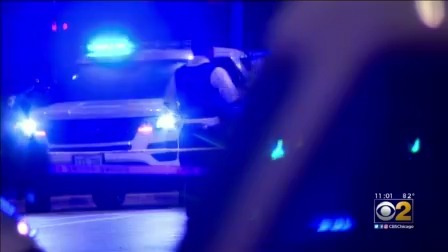 CHICAGO (CBS) — At least 82 people have been shot, 14 of them fatally, since 5 p.m. Friday and in a violent holiday weekend in Chicago.

In shooting violence over Independence Day weekend in 2019, at least 68 people were shot, five fatally. On the holiday weekend in 2020, nearly 80 people were shot and 15 were killed. One of those shot was 14-year-old Vernando Jones. July 4 is the anniversary of his death, and the FBI is offering a $25,000 reward for anyone who has information leading to the conviction of his killers.

In one incident Friday night around 11:22 p.m., a 40-year-old man was playing music in his Englewood apartment when a neighbor complained about the music. After an argument, the unidentified person shot the 40-year-old victim several times in the torso. He was pronounced dead on the scene.

On Friday afternoon in North Lawndale, two 20-year-old men were shot while sitting in a vehicle at a red light in the 3900 block of West 16th Street when someone walked up and started shooting at them. One of the men was shot twice in the torso and three times in the back. He was pronounced dead at Mt. Sinai Hospital. The other was shot in the leg and stabilized at Stroger Hospital.

The two victims fled the scene after the shooting, and the vehicle struck a building where a 65-year-old man was sitting on the stairs. He was struck by the vehicle and taken to Stroger Hospital with a broken leg.

In an incident Saturday just before 7 p.m. in Garfield Ridge, two men were shot and injured and a third was killed. According to Chicago police, a concerned citizen reported a vehicle heading northbound in the 4200 block of South Cicero slowing down and bumping into the curb. Police found an unidentified man, about 20 years old, with three gunshot wounds to the torso. He was pronounced dead after being taken to Mt. Sinai Hospital. A 32-year-old and a 27-year-old were both shot in the arm in the same incident.

Saturday around 10:46 p.m., a woman was killed and two men were injured in a shooting in an alley in South Austin. Police said the victims were standing outside in an alley, in the first block of North Menard, when a 33-year-old man started shooting around 10:46 p.m. Police said a witness with a concealed carry license saw the shooter and shot him in the arm and hip. The 33-year-old offender is in serious condition and was taken into custody.

On Sunday morning a man was shot and killed in Old Town as he was walking across the street. Another man shot in his direction, hitting the unidentified victim in the chest.

Early Monday morning, two Chicago police officers were shot while trying to disperse crowds in the South Austin neighborhood. Police Supt. David Brown said the officers, a commander and another sergeant, were dispersing a crowd, in the 100 block of North Long Street around 1:30 a.m., when they heard shots and felt pain. Both officers are expected to recover.