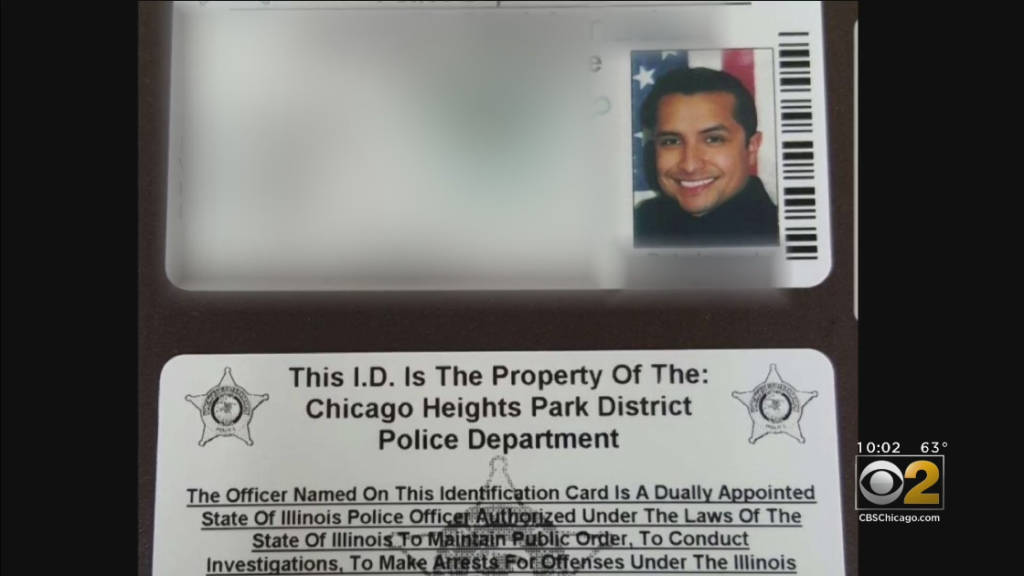 CHICAGO HEIGHTS, Ill. (CBS) — A fired suburban park district police chief is accused of flashing his old badge to get out of trouble – and we have learned it is not the first time.

CBS 2’s Jermont Terry dug into why former Chicago Heights Park District Police Chief Jose Maldonado still has his old badge – which he is apparently holding onto despite not having held the post in nearly five years.

The City of Chicago Heights told us Illinois State Police called to verify his employment after he flashed the badge following a crash.

Along the Dan Ryan Expressway Wednesday night, state police told us they found Maldonado’s banged-up vehicle. The ISP said Maldonado veered across all lanes near 63rd Street, when he crashed all by himself.

Troopers cited Maldonado for driving too fast. But during the investigation, we learned that Maldonado produced an ID showing he is the chief of police at the Chicago Heights Park District.

The badge is from 2015, when Maldonado actually was the chief. But he was fired after a DUI arrest in 2016.

So imagine the City of Chicago Heights’ surprise when state police reached out. The city confirmed they were contacted, and they let ISP know Maldonado was not with their police department – nor was he the chief of the park district police anymore.

So the question is, why does Maldonado still have the chief’s badge?

It is the same badge he is accused of flashing in 2018 – on that occasion in Midlothian, where he lives. He was arrested for impersonating an officer in that incident.

So once again, why wasn’t the old badge confiscated?

Terry tried to get Maldonado to explain, but members of a family at his listed address in Midlothian were not happy to see CBS 2 and yelled at us to leave.

The Chicago Heights Park District told us Maldonado should not have the ID and badge in his possession. But no one at the district could explain why they never demanded the ID and badge be returned – either when they fired Maldonado or when he was arrested for impersonating an officer three years ago.

State Police only cited Maldonado for the crash, but the investigation is ongoing.

Maldonado’s attorney, Frank Avila, contacted CBS 2 late Thursday – saying Maldonado has a badge he is able to possess legally. Avila said since Maldonado never received a formal termination letter, he is within his legal rights.

The attorney said Maldonado did inform the ISP he was a former police chief, but never showed an ID or a badge.