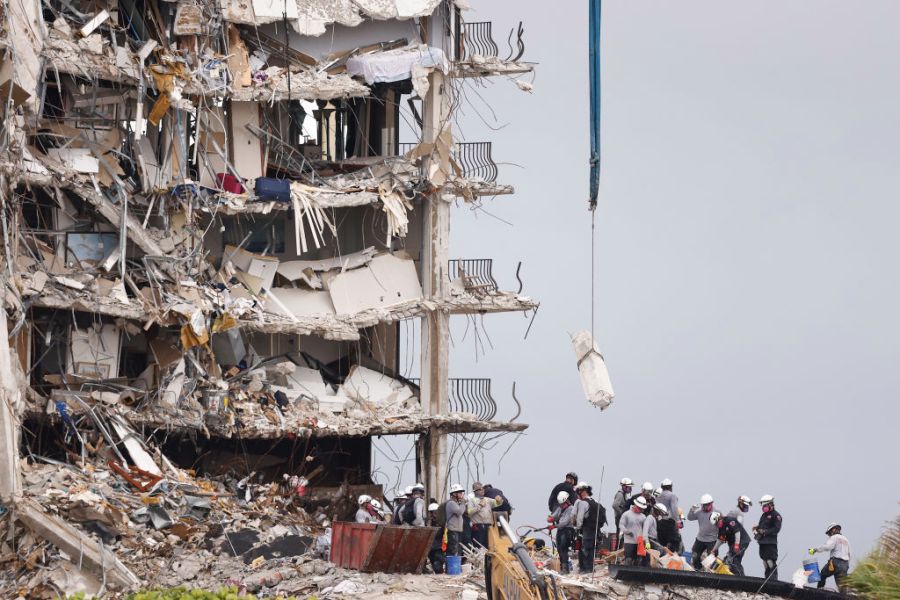 SURFSIDE, Fla. (NewsNation Now) — Two more victims were found in the rubble of the collapsed condo building in Surfside, Florida Friday, bringing the official death toll to 22, the Miami-Dade County mayor announced. This revised an earlier update Friday when officials announced they had found two victims Thursday night for a then-total of 20.

Making matters more complicated, Florida Governor Ron DeSantis warned that search and rescue efforts in the Surfside building collapse may be hampered by an incoming hurricane expected to hit this weekend.

Florida officials were working on plans to tear down what’s left of a partially collapsed oceanfront condominium building after concerns about the structure’s instability prompted a 15-hour halt to the search for survivors.

NEXT: Here are the victims of the Florida building collapse

The collapse of the 12-story Champlain Towers South condominium killed at least 20 people. At least 128 are still missing and feared buried beneath tons of pulverized concrete, twisted metal and splintered lumber as the search stretched into its ninth day. No one has been rescued since the first hours after the collapse.

Miami-Dade Mayor Daniella Levine Cava said the number of missing declined following an audit. She explained that in some cases, one person may have been moved to the “accounted for” list when, in fact, an entire family had been found to be safe.

Detectives have worked around the clock to vet the list, recontacting relatives and others. In some cases, English and Hebrew names have been offered for the same missing relative, officials have said.

Levine Cava confirmed that one of the victims found overnight was the 7-year-old daughter of a Miami firefighter who was part of the search team.

The discovery of the girl’s remains was especially hard on rescuers, Cava said.

“It was truly different and more difficult for our first responders. These men and woman are paying an enormous human toll each and every day, and I ask that all of you please keep them in your thoughts and prayers,” she said at a news conference.

Levine Cava stated the demolition decision needs to be made “extremely carefully and methodically,” considering the potential impact on the pile of debris and the effect on the search.

The Champlain Towers South Condominium Association board issued a statement Thursday morning announcing that an independent receiver has been appointed to oversee the legal and claims process.

“The collapse of Champlain Towers South is an unspeakable tragedy that has devastated our community, our neighbors, and our friends,” the statement read in part. “We are grieving and our hearts ache for those who have been lost and for their families. They have our deepest condolences.”

The association added they will work with all investigations launched into the collapse as well as any search and rescue efforts.

Florida collapse survivors escaped with their lives, but little else

Scott Nacheman, a FEMA structures specialist, said engineers are looking at different methods for the demolition and how to proceed “to make the site safe for ongoing rescue operations.”

Nacheman said that if the building comes down, there initially will be a slowdown in the rescue operation. But he said the demolition of the structure would create a safer working environment that could allow more personnel on the site and accelerate the pace of the work.

He said it would likely be weeks before officials schedule the demolition.

The rescue work was halted early Thursday after crews noticed widening cracks and up to a foot of movement in a large column.

The halt threatened to dim hopes for finding anyone alive in the debris a week after the tower came down. Surfside Mayor Charles Burkett said the halt was worrisome since “minutes and hours matter, lives are at stake.”

The operation was restarted about 15 hours later when it was deemed safe, though with a new set of precautionary measures in place, Miami-Dade County Fire and Rescue Chief Alan Cominsky told reporters Thursday evening.

Under the new search plan, teams would confine their work for now to just three of nine grids demarcated in the ruins of the building, Cominsky said.

Authorities were eager to make as much progress as possible before the expected arrival of Tropical Storm Elsa, which was blowing in from the Atlantic.

The cause of the collapse is under investigation. A 2018 engineering report found that the building’s ground-floor pool deck was resting on a concrete slab that had “major structural damage” and needed extensive repairs. The report also found “abundant cracking” of concrete columns, beams and walls in the parking garage.

Just two months before the building came down, the president of its board wrote a letter to residents saying that structural problems identified in the 2018 inspection had “gotten significantly worse” and that major repairs would cost at least $15.5 million. With bids for the work still pending, the building suddenly collapsed last Thursday.

During a private meeting with family members Thursday, President Joe Biden drew on his own experiences with grief to try to comfort them. Biden lost his first wife and baby daughter in a car crash and decades later lost an adult son to brain cancer.

“I just wish there was something I could do to ease the pain,” he said in a video posted on Instagram by Jacqueline Patoka, a woman who was close to a couple and their daughter who are still missing.

Biden spoke of wanting to switch places with a lost or missing loved one. “The waiting, the waiting is unbearable,” he said. 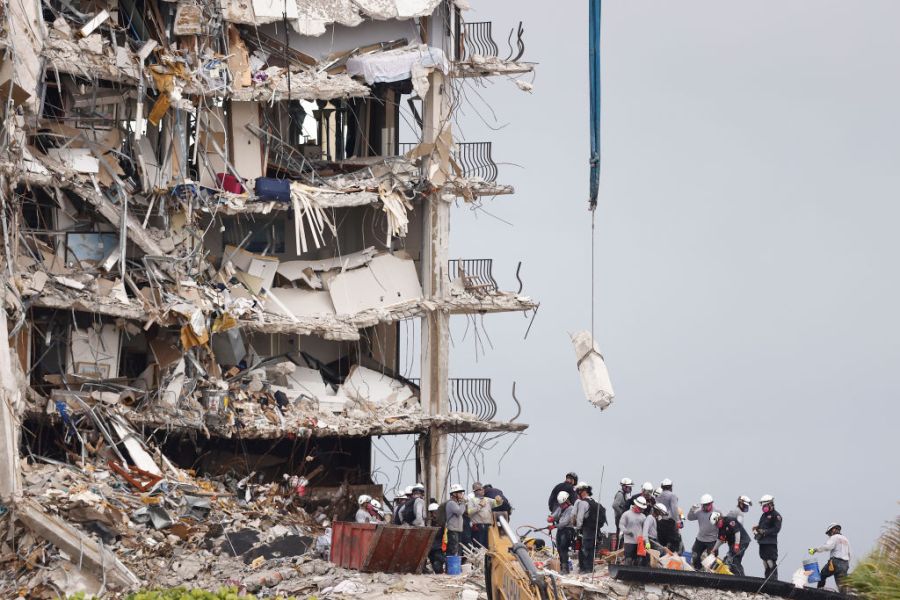