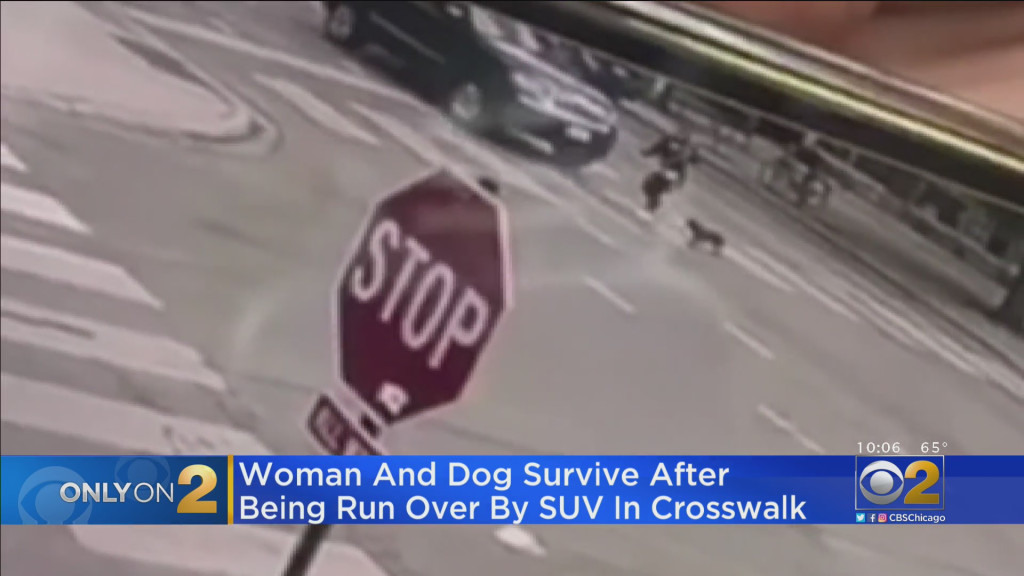 CHICAGO (CBS) — A woman walking her puppy is slammed to the street by a car, her dog caught under the vehicle in the crosswalk. Miraculously, they both survived.

CBS 2’s Steven Graves reports the woman has a message for the driver, and for you at home.

They were close before, but now their bond is even tighter after surviving that collision in Humboldt Park.

The two were just taking a walk last week, and security video from a liquor store shows them enter a crosswalk at Campbell and Division.
A driver of Jeep Cherokee stops and then suddenly drives forward, sending Samantha flying into the intersection.

Dobbs looks like he’s run over by a wheel but gets back up and runs off.

She and some good Samaritans found Dobbs some blocks away. The driver ran after her, too and apologized, but no explanation as to why she did this.

“Maybe she just didn’t see me, I was in her blind spot,” said Basar.

Samantha just wants people to pay attention. “The city is opening up. It’s summer,” she said.

Samantha is speaking up for one big reason.

“My best friend was killed four years ago in a similar situation like this. He was a pedestrian, struck by a car. It’s just really unfortunate these things continue to happen.”

But thankfully this is just a cautionary tale. Mom and puppy are now working on some issues.

Both are just happy to have each other.

Samantha did make a police report, but Chicago police have not told us whether that driver of the Jeep was cited.