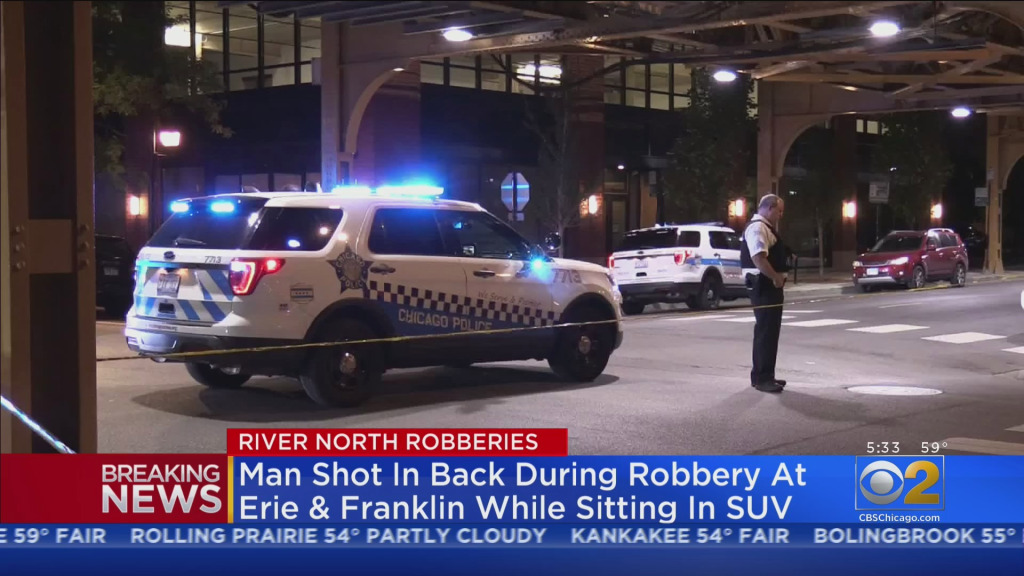 CHICAGO (CBS) — A rash of early morning robberies in River North left one man shot, and several others without their phones and wallets.

While police aren’t saying the three robberies are connected, they happened within less than an hour of each other, only blocks apart.

CBS 2’s Meredith Barack talked with people living there on what they’re doing not to become a victim.

The first robbery took place near the intersection of Ontario and Franklin streets. Three men were walking around 1:45 a.m., when three men with guns got out of a black SUV and stole the victims’ phones and wallets.

Then, around 2 a.m. a few blocks away at Erie Street and LaSalle Drive, four men got out of a gray SUV and robbed two men at gunpoint. The thieves only got away with an iPhone.

About 15 minutes later, a man was shot during a robbery near Erie and Franklin streets, under the ‘L’ tracks, while two men and a woman were sitting in a parked SUV. That’s when people got out of a black SUV and announced a robbery.

A 31-year-old man struggled with one of the robbers and was shot in the back. He’s now hospitalized in fair condition at Rush University Medical Center.

The thieves stole two purses from the woman in the car, and the other man’s wallet and iPhone.

One River North resident said she’s noticed an increase in noise and crime in the neighborhood, and has started to take extra steps to ensure she too doesn’t become a victim.

“It’s all about not having your head in your phone, and just keeping your ears open and your earphones and music down,” Cara Depiero said. “It’s a little scary at night, so we certainly take those precautions, and we’ve started doing that probably just six months ago.”

No one was in custody for any of the robberies as of late Thursday morning. Police asked anyone with information to come forward.