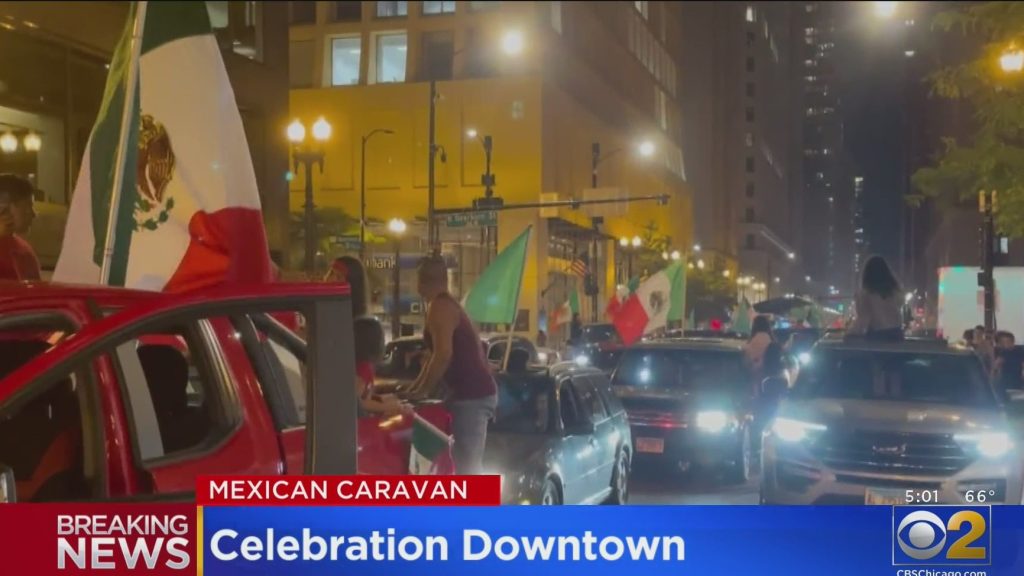 Late Thursday night, car caravans took over the streets all around the downtown area for a wild scene. The rolling parade set off fireworks, honked horns, revved engines, and waved flags.

The rolling parade, honking horns, waving flags, revving engine, even setting off fireworks was part of the scene that continued until around 4 a.m. Friday near Michigan Avenue and Wacker Drive.

This is what happened after the 26th Street Mexican Independence Day Parade was cancelled because of COVID-19 for a second year in a row. People poured into the streets anyway, making a celebration of their own, creating a sea of Mexican flags in one giant car caravan, showing Mexican pride on a day they gained independence from Spain over 200 years ago.

Traffic was completely blocked off Thursday night all around downtown. There were reports of heavy traffic on DuSable Lake Shore Drive, Columbus Drive, the Magnificent Mile, and the Eisenhower Expressway, and all around surface streets in the Loop and beyond.

There were also fireworks set off in Daley Plaza.

Gridlock in #TheLoop right now. Mexican Independence Day celebrations have surrounded ⁦@cbschicago⁩ We’re all wondering how the heck we’ll get out of here after tonight’s newscast! pic.twitter.com/Gnw9Q01Gl6

By 10:30 p.m., traffic remained at a standstill at Michigan Avenue and Wacker Drive. Police had begun trying to reopen the intersection a short time earlier.

At one point Thursday night into Friday morning, people climbed on top of a CTA bus, with police vehicles flashing their lights just a few feet away.

One man rode his motorcycle down the sidewalk just outside the CBS 2 broadcast center.

The rolling parade also went on for hours Wednesday night into Thursday morning, with flag-waving cars in the South Loop, along DuSable Lake Shore Drive and Wacker Drive, and in the Loop.

Police blocked off some intersections at times to let the bumper-to-bumper traffic pass through.

“It’s not just a bunch of people riding around with flags. They’re showing everybody in the community that we’re coming together, and we’re just showing the city of Chicago what we’re doing together as a whole,” driver Julio Trevino said.

The all-night party on wheels also marks the beginning of Hispanic Heritage Month, which runs from Sept. 15 through Oct. 15.

Asked about a possible third night of celebrations, Illinois State Police said there are no planned closures. We also asked Chicago Police about any possible deployment of additional officers should celebrations continue, but have not heard back.