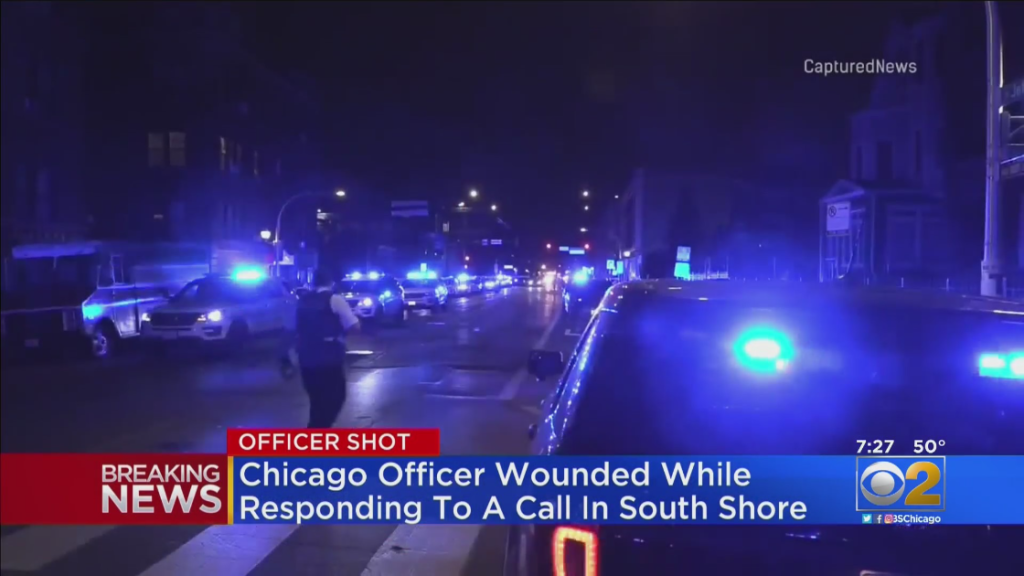 CHICAGO (CBS) – A police officer responding to shooting was struck by a bullet fired by a teenager who had been wounded in the incident, sources tell CBS 2.

The female officer was walking up to the teen when he shot her, sources said.  The bullet went though her legs, and she drove herself to the hospital and is in serious but stable condition.

The teen was taken to the hospital with a gunshot wound in the torso. Another victim, a 25-year-old man, was killed in the shooting Friday night in South Shore, authorities said.

Officers responded to shots fired in the 7200 block of South Jeffrey at about 10:51 p.m. and found two men, one 25 and one 15, on the ground. While they were investigating, the officers heard shots fired in their direction, police said. Officers didn’t discharge any weapons during the incident, police said in a statement. After she arrived at the hospital, the officer told a dispatcher: “I just want to say thank you to everybody who responded. I will be back soon. Have a good night, and you all be safe.” The 25-year-old was shot multiple times throughout his body and was taken to the University of Chicago Medical Center where he was pronounced dead, police said. The 15-year-old was shot multiple times in the legs and was taken to Comer Children’s Hospital where he was listed in fair condition. Police said he was unable to provide further details on the incident due to the severity of his injuries.

Nobody is in custody as Area One detectives investigate.