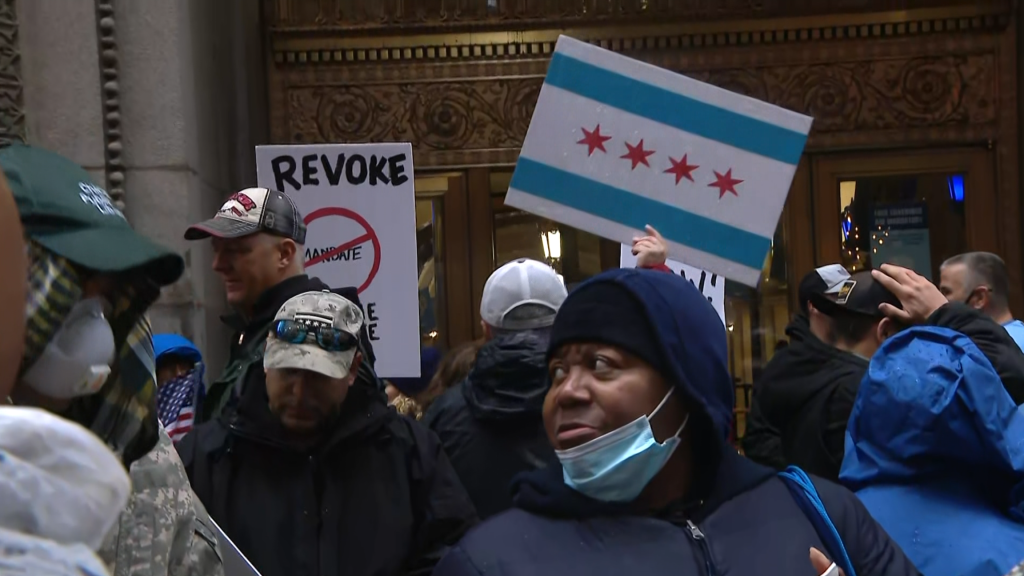 by Mugo Odigwe and Todd Feurer

Ald. Silvana Tabares (23rd) formally introduced that ordinance on Monday, but another alderman used a parliamentary maneuver to shuttle the proposal to the council’s Rules Committee, where measures opposed by the mayor are typically sent to languish without a vote.

That didn’t stop some city workers, including police officers and firefighters, from gathering outside City Hall to show their disapproval of the vaccine mandate.

The city’s policy required all city workers to report their vaccination status by Oct. 15, or face the prospect of being placed on no-pay status. Unvaccinated city workers may opt to undergo twice weekly testing for COVID-19 through the end of the year, but come 2022, all city workers must be fully vaccinated.

The Chicago Fraternal Order of Police, the union representing rank-and-file officers, organized Monday’s rally against the vaccine mandate, and supporting Tabares’ proposed ordinance, which would not only repeal the vaccine mandate for city workers, but require City Council approval of any future mandates that could result in disciplinary action or no-pay status for city workers.

Chicago FOP President John Catanzara spoke out during the public comment period at Monday’s council meeting, urging aldermen to back the ordinance.

“I’m going to challenge every alderman, in case you didn’t hear it, and I’m going to make it loud and clear: that ordinance that Alderman Tabares put forth puts control back in your hands,” he said. “In spirit, it is right that you have control of what city policies get put forth to the city workforce. You can hate me, you can hate my message, but this is about the entire city workforce, not the Chicago Police Department, not the FOP, and it’s not even about me.”

Catanzara also warned aldermen who don’t support repealing the vaccine mandate that the police union would back challengers against them in the 2023 city elections.

“We are coming for every one of your damn seats, because this is not the way a government is supposed to run. It is not a queen on that throne. It is a mayor. The mayor presents ideas. You help craft those ideas and become reality in ordinance,” she said. “This tyrant at the top needs to stop what she’s doing.”

Lightfoot has accused Tabares of “carrying the water” for Catanzara by proposing to repeal the vaccine mandate for city workers.

“It’s foolishness and I’m going to do everything I can to stop it,” Lightfoot said last week.

During the rally outside City Hall on Monday, Chicago Fire Department Capt. Scott Troogstad said he was recently placed on unpaid leave after refusing to report his vaccination status on the city’s online portal.

“We just want an equal playing field, that’s all. We want to do what we’ve done for the last two years: serve the public that we’re supposed to serve, that we’ve taken an oath to serve. We want to do that to the best of our ability, and there’s only one thing preventing us from doing that, and that’s up there,” he said, pointing to City Hall. “And if everyone else is cool with that, I guess I got no say in the matter, but I’m not cool with it.”

Troogstad is one of dozens of firefighters and Water Department workers who have filed a federal lawsuit against the city, seeking to block the vaccine mandate.

The FOP has filed its own lawsuit in Cook County Circuit Court, and the city has filed a lawsuit against the FOP over the union’s efforts to encourage officers to defy the mandate.

A hearing is set for Monday afternoon on the city’s bid to extend a restraining order barring Catanzara from making public comments that discourage officers from reporting their vaccine status.