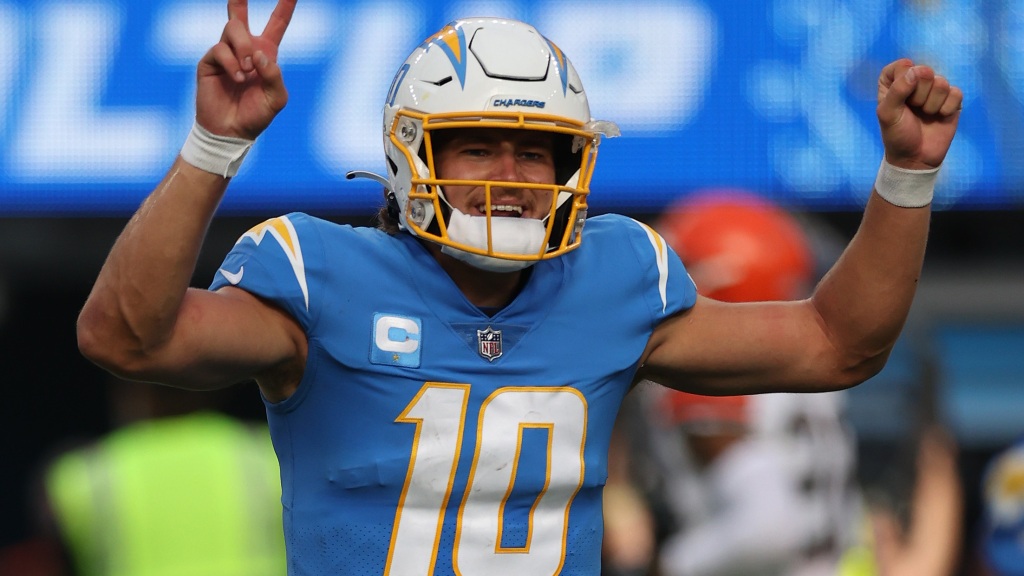 (CBS) – As we head into week 6 of the NFL season the AFC West is shaping up . The Kansas City Chiefs coming off back-to-back Super Bowl appearances are currently sitting at the bottom of the division at 2-3, with the Los Angeles Chargers riding high at 4-1. The Las Vegas Raiders and Denver Broncos sit in a two-way tie at 3-2.

It’s been the Patrick Mahomes show since #15 took over the starting job in Kansas City, but second-year signal caller Justin Herbert is the one grabbing headlines this season, despite fairly similar stats. Mahomes comes into week 6 with 1,490 passing yards/16 touchdowns/6 picks while Herbert has racked up 1,576 passing yards/13 touchdowns/3 picks.

The Raiders and Broncos square off this week with each looking to move two games above .500. Mahomes and the Chiefs will hit the road to take on the Washington Football Team, and the Bolts are headed for a heavyweight match up with the AFC North division-leading Baltimore Ravens.

All times listed are Eastern.

Kansas City looks to rebound after an 18-point loss to the Buffalo Bills at Arrowhead last weekend. The Washington Football Team is also coming off a home loss, as they fell to the New Orleans Saints, 33-22. These two teams have had two common opponents so far, the Chargers and Bills, going a combined 0-4. If you put stock into this sort of thing, although the Chiefs’ losses to Buffalo and Los Angeles were by a combined 20 points while Washington’s losses were by a combined 26 points, seemingly giving KC the edge in a head-to-head comparison.

As for Larry Hartstein’s opinion heading into this one he says, “It’s up to a touchdown now. The money has been coming in on the Chiefs, despite the fact that Patrick Mahomes has thrown six interceptions already, the last three games. This defense giving up 7.1 yards per play. That is historically bad. Last year the Lions and Jacksonville were the two worst defenses, only 6.3 yards per play; almost a full yard worse.

Hopefully Chris Jones will be back to help that defense. But I just think the Chiefs aren’t as bad as they’ve looked. Look at who they’ve played — Buffalo, Cleveland, the Chargers, the Ravens. Those are the four best teams in the AFC. So it’s been a gauntlet. When they did play an NFC East team, Philadelphia, we all remember what they did, winning 42 to 30.

I think this is a similar spot where they don’t have to force things as much against this Washington defense, which is bad. I do expect the Chiefs to put up a big number and cover. But at a touchdown it’s not as great of a play as it was at six or six and a half.”

This contest will feature two critically acclaimed QBs who are playing as good as anyone in the league right now. Lamar Jackson won the MVP in 2019, and he is on pace to have an even better season in a few key stats this year. Herbert is coming off a record-breaking ROY campaign and is also on pace to beat his award-winning numbers.

Here’s what Hartstein has to say about this match-up between 4-1 division leaders.

“This is going to be a great game. If you follow me on SportsLine, I jumped on this early. Chargers plus three and a half. I didn’t think three and a half would last, and now it’s down to three.

The Ravens had to go to overtime last week, and this is a short week for them coming off an emotional win. It’s going to be a great game, I feel this game is going to come down to the wire. You look at the Chargers, and they tend to play very close games.

I like the value at three and a half. At three, I don’t love it as much. But I can’t wait to watch it, because you have two legitimate MVP candidates in Justin Herbert and Lamar Jackson.”

For our final AFC West matchup, Hartstein is leaning towards the black and silver.

“A lot of people are thinking that the Raiders will be in disarray because Jon Gruden was the play-caller and the offensive mind. I think last week they were distracted by the controversy, they were listless. They basically didn’t show up at home against the Bears.

I cannot imagine them playing worse, now that that cloud is lifted. Rich Bisaccia, the interim coach, is very well respected. He has interviewed for some head-coaching jobs around the league, and I think the Raiders will be focused.

This line has ticked up. The Broncos were at three, now they’re laying three and a half. I just think everyone’s expecting the Raiders to lie down and get steamrolled, but I don’t see it. I think this number feels about right.”

So what NFL picks can you make with confidence? And which Super Bowl contender goes down hard? Visit SportsLine to see which teams win and cover the spread, all from a proven computer model that has returned almost $7,900 since its inception, and find out.