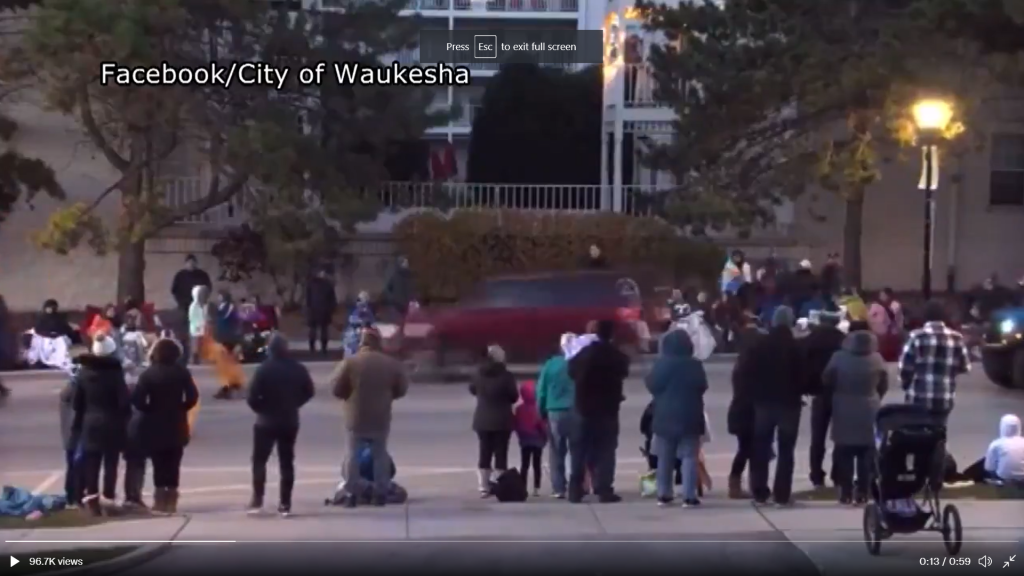 by Marissa Parra and Marie Saavedra

CHICAGO (CBS) — A 39-year-old man is facing five counts of murder, after plowing into the Waukesha Christmas Parade in Wisconsin, just west of Milwaukee, on Sunday, killing five people and injuring 48 others.

“We are confident he acted alone. There is no evidence that this is a terrorist incident,” he said.

Thompson said Brooks was involved in a domestic disturbance with another person at a different location shortly before plowing into the crowd, but there is no evidence he was targeting anyone in the parade. Thompson said police did not have time to respond to the domestic disturbance to investigate before Brooks drove his SUV into the parade, so he could not provide details on the domestic incident on Monday afternoon.

#BREAKING: Police confirm at least 5 died this evening in Waukesha

Online court records showed a person named Darrell Brooks, with a birthdate making him 39, has two open criminal cases in Milwaukee County. In one case, filed Nov. 5, he is charged with resisting or obstructing an officer, reckless homicide, disorderly conduct, bail jumping and battery. Records show $1,000 bond was posted on Friday.

Thompson confirmed an officer opened fire on Brooks’ vehicle as the red SUV during the incident to try to stop the vehicle, but stopped firing due to the large crowd at the parade. No one was injured by gunfire, and the officer who opened fire has been placed on administrative leave.

Those who died have been identified as:

Dr. Alan Johnson, vice president of critical care at ProHealth Care, said 29 victims were brought to Waukesha Memorial Hospital, including several children. After they were treated and stabilized, 11 of those children were transferred to Children’s Wisconsin, a pediatric hospital in Milwaukee.

The Waukesha County Community Foundation and United Way of Greater Milwaukee & Waukesha County have teamed up to create a “United for Waukesha Community Fund” to support the needs of the victims and their families. Donations can be made at www.waukeshafoundation.org/parade. Debris litters the street at a crime scene on November 21, 2021 in Waukesha, Wisconsin. (Photo by Jim Vondruska/Getty Images)

“The Milwaukee Dancing Grannies are devastated by this terrible tragedy with of loss of life and injuries in the Waukesha Christmas parade.
Our group was doing what they loved, performing in front of crowds in a parade putting smiles on faces of all ages, filling them with joy and happiness. While performing the grannies enjoyed hearing the crowds cheers and applause which certainly brought smiles to their faces and warmed their hearts.
Those who died were extremely passionate Grannies. Their eyes gleamed…..joy of being a Grannie. They were the glue….held us together.
Our hearts are heavy at this most difficult time, as more information and updates become available it will be posted . Please keep them their families, friends, the Milwaukee Dancing Grannies and everyone who lives have forever changed in your thoughts and prayers.”

“Those who died were extremely passionate Grannies”

Thompson said the parade route was blocked off by a squad car and barricades, but Brooks “drove right through the barricades and the officers.”

“When the officer tried to engage and stop the threat, he still continued through the crowd,” Thompson said.

Nothing visually graphic,, but notice the moment you hear screams and see some of crowd jumping in alarm

Looks like a possible cop running 10 seconds in and several cop cars racing in a minute later@cbschicago pic.twitter.com/3srW5Y94He

Graphic video posted online shows a red SUV drive into the parade, striking a number of people, including members of a high school marching band. Others can be seen running away and screaming as the SUV continued on while others run to the aid of victims lying in the road.

“Today we experienced a horrible senseless tragedy,” Reilly said Sunday night. “My heart goes out to all those affected by this senseless act. “

Photos posted by CBS 58 show what appears to be the red SUV parked outside a home after the incident.

Brooks was arrested shortly after plowing into the crowd, and his SUV was recovered from 338 Maple Avenue. Another video posted on Twitter showed a number small groupings on the street providing aid to injured individuals lying on the ground.

“I could see kids on the ground, little bodies on the street… I’m still in shock”

We just interviewed a #waukeshaChristmasParade witness. She says many of those injured were wearing parade costumes

A witness who was at the parade described the scene, saying many of those injured were in parade costumes.

“I could see kids on the ground, little bodies on the street. I’m still in shock.”

Police asked anyone who might have video footage of the incident to provide it online at https://forms.gle/xVKV6n9JbwUNjwvC8.

The School District of Waukesha canceled classes for all students on Monday and Tuesday, and classes will resume next Monday, after the Thanksgiving break. There will also be additional counselors available during the school day this week at all buildings for students who need support.

The Archdiocese of Milwaukee addressed the tragedy with the following statement:

Our prayers are with the people who have been injured and killed during the tragic incident in Waukesha.
Among the injured are one of our Catholic priests, as well as multiple parishioners and Waukesha Catholic school children.
Please join us in prayer for all those involved, their families, and those who are traumatized from witnessing the horrible scene.

If you are experiencing emotional distress the Disaster Distress Helpline is here for you. Call or text 800-985-5990 to be connected to a trained, caring counselor – 24/7.#Waukesha pic.twitter.com/orAYcHDWGI

The city of Waukesha also has set up a Friends and Family Resource Center at Carroll University in the Campus Center ballroom for all the victims from 2 p.m. to 6 p.m. on Tuesday and 9 a.m. to 1 p.m. on Wednesday. The District Attorney Victim Assistance Program is also available to assist. You can email help4victims@da.wi.gov