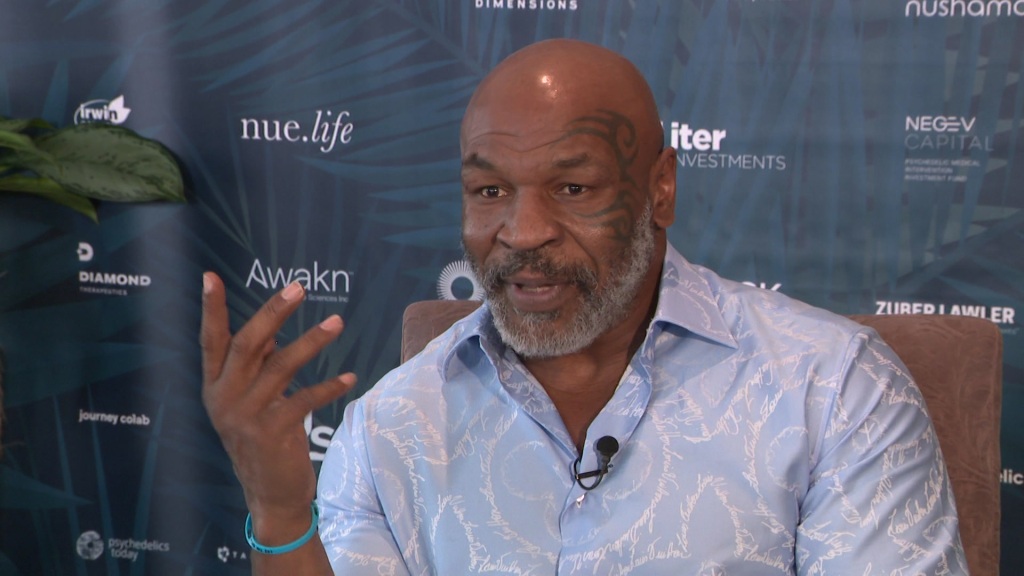 MIAMI (CBSMiami) – Inside the ring, it seemed like “Iron” Mike Tyson had steel in his gloves. He became the youngest heavyweight champ ever with 44 of his 58 fights ending by knockout. He once infamously said, “It’s just my nature to reach for you and take your heart, your spleen, your blood, and your liver.” But, now, 55, Mike Tyson seems to be all heart. The fighter is now on a mission to provide peace of mind — through the rising psychedelic compound psilocybin — to anyone willing to listen.

“My mind was blown away with psychedelics and I just wanted the world to know what I experienced,” Tyson told the standing-room-only crowd at Wonderland Miami, dubbed the “largest psychedelic medicine event, ever.”

It was attended by scientists and medical professionals from around the globe. Tyson says he began using psilocybin about five years ago, telling CBS Miami with pure joy that it’s changed his life for the better, forever. “That’s psychedelics, baby! That’s the toad, baby. That’s some shrooms, baby,” Tyson exclaims. “I took some medicine. The right medicine. It helps me reach the highest potential.”

Tyson confessed the toughest opponent he ever faced, inside or outside the ring, was himself. The champ admitting he still battles low self-esteem, even saying he may not have been able to do this interview without the help of psychedelics.

”I’d probably need a line or something. I’d need a line’ to finish this interview,” he said.

Tyson admits he was doing hard drugs like cocaine and was headed down a dark path, much like one of his newest business partners. Oddly enough, another fighter from a different sport.

Dr. Joseph Tucker, the CEO of Enveric Biosciences, explains, “These are ways to remake the brain and give the brain new avenues, new ways of thinking or new opportunities. So, that’s how you can actually start to re-wire the brain, and that’s what the latest science is showing.”

Carcillo said he felt like his brain was made brand new after a teammate introduced him to psilocybin, better known as magic mushrooms, two and a half years ago. “There’s no FDA approved pharmaceutical for traumatic brain injury and once I took psilocybin I got clear brain scans, clear blood work. Then, I was able to put this innovation I had into patents and create Wesana Health,” he said.

Wesana Health is an integrated life science company “on a mission to revolutionize the treatment of neurological health…” Carcillo brought Mike Tyson on board as an advisor and investor. Now, they’re both doing what they do best: fighting against the stigma associated with psychedelics and psilocybin.

“I was afraid of psychedelics too, and they made me the man I am now,” concluded Tyson.