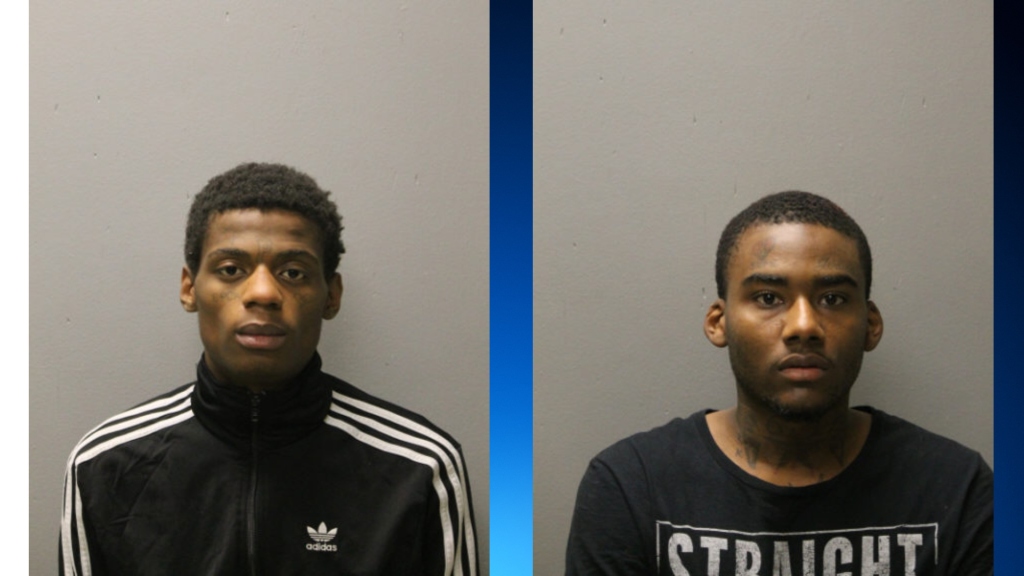 CHICAGO (CBS) — Bail was denied Thursday for two men accused of killing an armored truck guard during a robbery attempt, and later robbing a cell phone store, before eventually turning their guns on two suspected accomplices during a “murderous spree” on the South Side.

Antwon Montgomery, 19, and Deandre Jennings, 21, have both face multiple felony charges in connection with the crime spree that stretched from West Chatham to Grand Crossing to South Chicago. Prosecutors said the crime spree began around 9:30 a.m. Tuesday, when the two now-slain accomplices walked up to a man raking leaves and demanded his car keys at gunpoint. The victim handed over the keys to his Lincoln sedan, parked in the driveway, and the two assailants took off in his car.

Police said later, around 10:20 a.m., as three armored car guards were loading an ATM at the Bank of America at 83rd Street and Princeton Avenue, Montgomery, Jennings, and their two accomplices parked the stolen Lincoln in the lot.

Montgomery, Jennings, and one of the accomplices got out of the car – two of them wielding handguns, the third with a long rifle – dressed in black and wearing masks, approached the guards, and demanded the cash – and shot two of the security guards.

One of the guards – Lashonda Hearts, 47 – was shot six times, and another, a 46-year-old man was shot twice. Both were taken to University of Chicago Medical Center, where Hearts died, and her partner was left in critical condition with gunshots to the lower extremities. The third security guard was not struck and was able to return fire, but did not strike the assailants, police said.

Police and prosecutors said the robbery crew was unable to get the cash container from the guards during the attack, and fled the scene in the stolen Lincoln.

A short time later, a witness was parked behind an Infiniti SUV when he saw the stolen Lincoln pull up alongside the Infiniti, and Jennings and Montgomery got out of the Lincoln and hopped in the Infiniti and drove off.

At 10:55 a.m., the Lincoln was captured on police surveillance camera and private video cameras as it pulled into a strip mall at 6716 S. Stony Island Ave., police said.

Prosecutors said Montgomery got out of the car, walked up to the counter inside the Boost Mobile store, and pulled out two handguns, pointing them at an employee and a customer, and announced a robbery.

The customer screamed and got on the floor, while the clerk opened the register and stole the cash inside, before also grabbing several bags of cell phones and fleeing the scene.

Around 11:30 a.m., where a witness heard gunfire, and saw an Infiniti SUV crash into a tree near 87th and Saginaw, according to prosecutors. The witness then saw Jennings and Montgomery get out of the Infiniti and run inside a nearby home.

While inside the home, prosecutors said a witness saw Jennings, Montgomery, and other individuals passing round a duffle bag containing a rifle, and talking about hiding their guns. Jennings later told one of the people inside the home to call the police and tell them someone had been shot and killed in a car outside the house.

Upon arriving at the scene, officers found the driver and a front seat passenger in the Infiniti had both been shot. They were pronounced dead shortly afterward, and numerous boxes of cell phones from the Boost Mobile store that had been robbed were found both inside and outside the car, according to police and prosecutors.

Brown said after the attack on the armored car guards and the cellphone store robbery, the assailants ended up turning on each other, and Montgomery and Jennings shot and killed two of the others — 21-year-old Naiqwon Harper and 27-year-old George Holmes.

“Basically, this was, ‘There is no honor among thieves,’ and after the robberies and murder, they got into an altercation with each other – and two are deceased, and two are charged,” Brown said.

Prosecutors said Harper was shot in the back and the base of his neck, and Holmes suffered seven gunshot wounds – one in his left ear, one in his left shoulder, two in his chest, and three in his right knee.

At their bond hearing on Thursday, a Cook County judge ordered Montgomery and Jennings held without bail.

Prosecutors said Montgomery was on parole for a 2020 aggravated unlawful use of a weapon conviction at the time of the crime spree, and has two past juvenile convictions for armed robbery.

Jennings also has a lengthy criminal record, including two past weapons convictions as an adult, and past juvenile convictions for home invasion, theft, robbery, and domestic battery.

They’re both due back in court on Dec. 6.