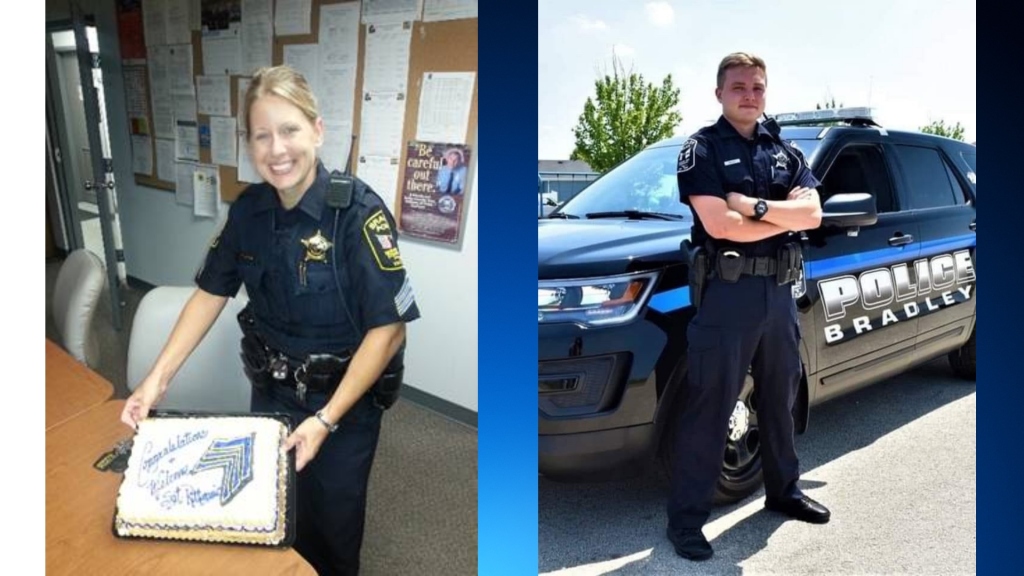 CHICAGO (CBS) — At least one suspect has been arrested in connection with a shooting that killed one Bradley police officer and critically wounded another at a hotel in Kankakee County on Wednesday.

The U.S. Marshals Service confirmed they have made at least one arrest in the shooting that killed Bradley Police Sgt. Marlene Rittmanic, and left Officer Tyler Bailey in critical condition, but no further information about the arrest was immediately available.

At least one suspect has been taken into custody in North Manchester, Indiana, near Fort Wayne. A second suspect also might be in custody, U.S. Marshals said.

Authorities had been searching for two suspects in the shooting — 25-year-old Darius D. Sullivan and 26-year-old Xandria A. Harris. It was not immediately clear who was in custody.

Authorities had been offering a $10,000 reward for information leading to an arrest.

Around 9:40 p.m. Wednesday, Rittmanic and Bailey responded to the Comfort Inn hotel at 1500 N. Illinois Highway 50 in Bradley, Illinois, after a call reporting dogs barking in an unattended vehicle in the parking lot.

Police said the officers located the vehicle and the possible owner inside a hotel room. Both officers were shot after trying to talk with the people inside the room, Bradley police confirmed.

Rittmanic, 49, died at the hospital. Bradley Police Sgt. Marlene Rittmanic was shot and killed while responding to an altercation at a hotel in Kankakee County, Illinois, on Dec. 29, 2021. (Source: Village of Bradley)

Bailey, 27, was in critical condition at the hospital. Meantime, a procession in Rittmanic’s honor was held Thursday afternoon as her body was taken from the morgue to Clancy-Gernon Funeral Home in Bourbonnais.

She was shot and killed on duty overnight at a hotel, another officer shot Tyler Bailey remains in critical
https://t.co/iwzv72L9sR @cbschicago pic.twitter.com/CtxzyPTqQL