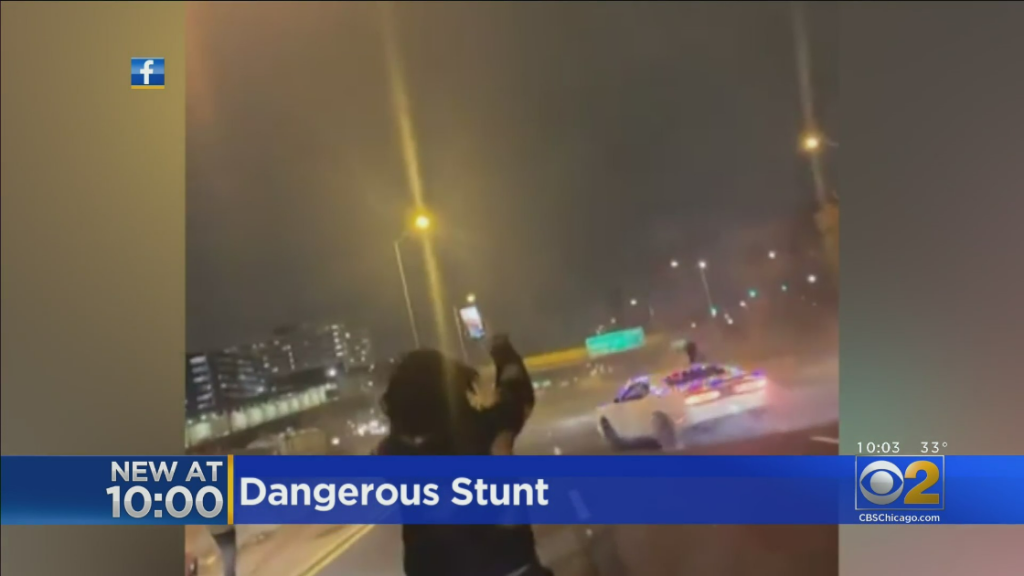 CHICAGO (CBS) — It looks like a scene from the “Fast and the Furious” movies, but it’s real – drivers were recently seen on video pulling dangerous stunts right on the Eisenhower Expressway.

If you’re wondering how it was allowed to happen, so are we. CBS 2’s Jermont Terry went searching for answers Monday.

Imagine hopping on the Ike, only to come to a complete stop – not because of rush hour, an accident, or an emergency – but because some people decided to shut the expressway down. On Monday night, a close look at the pavement still reveals some tire marks left behind from a crew of car enthusiasts who took over the Eisenhower Expressway.

Video shows people with their phones in hand standing in the middle of the expressway on Saturday night. People used their cars and blocked all the outbound lanes of traffic to take video of a crew doing dangerous stunts.

One person is heard calling it “funny as hell.”

The tire marks left behind on the Eisenhower near Racine Avenue were not just from one vehicle. There were multiple cars.

People were handing out of car windows to the glory of those recording – all while traffic backed up for the illegal show.

There are various videos that have been shared on social media. One particular live video lasted for more than three minutes – yet it is not clear how long the Ike was shut down.

But we do know the crew never encountered a single Illinois State Police trooper – as dangerous and illegal car stunts went on.

CBS 2 reached out to Illinois State Police to find out how such a thing could happen on one of Chicago’s busiest interstates.

The Ike is one of many city expressways where ISP saturated patrols because there were so many expressway shootings. While no one was shot or injured in this case, what played out over the weekend raises more questions about whether ISP has any control – or has simply lost control of the expressways they patrol.

On Monday night, CBS 2 was still waiting on the ISP to explain when troopers were alerted, if cameras caught the act, and more importantly, how they can ensure it won’t happen again.