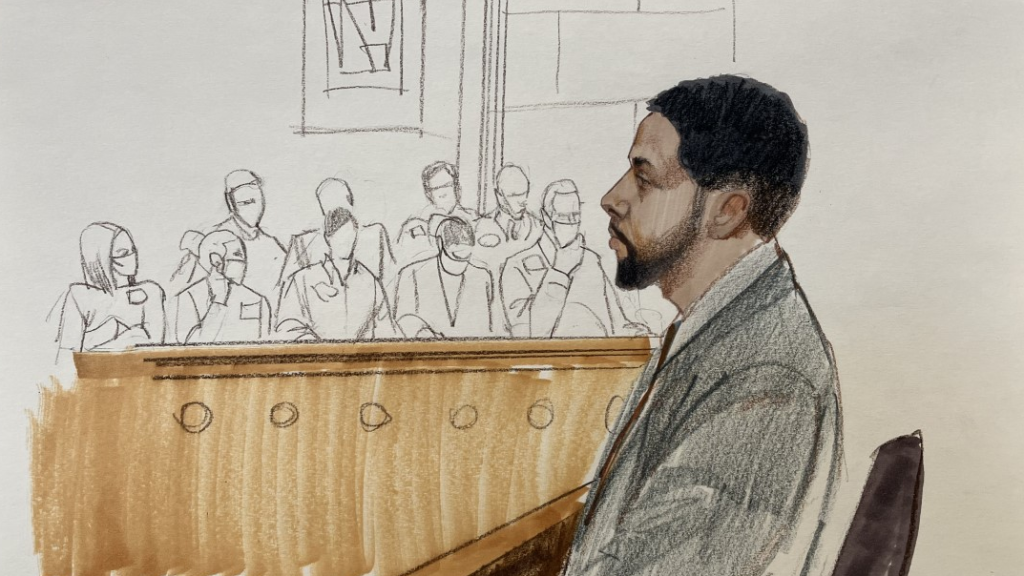 CHICAGO (CBS) — Actor Jussie Smollett took the stand at his trial on Monday, telling jurors he paid two brothers — Abel and Ola Osundairo — $3,500 to help him with training and nutrition advice, not to stage a fake hate crime against himself.

Smollett, who once starred on the hit show “Empire,” faces six counts of disorderly conduct, accused of orchestrating a fake attack against himself nearly three years ago, and then lying to police about it, in a bid for publicity.

Smollett, who is Black and gay, had told police he was attacked as he was walking home in Streeterville around 2 a.m. on Jan. 29, 2019. He claimed two masked men – one of them also wearing a red hat – shouted racist and homophobic slurs as they beat him, put a noose around his neck, and poured a chemical on him. Police and prosecutors have said Smollett orchestrated it himself, paying the Osundairo brothers $3,500 to help stage the attack, because he was unhappy with “Empire” producers’ response to hate mail he had received.

Smollett began his testimony by telling jurors about his family, and their various jobs, as jurors were shown family photos. Smollett also told the jury about working as a child actor, including one of his first roles in the 1992 film “The Mighty Ducks,” although he said he was not a star.

Smollett said he did not grow up rich, and worked jobs in retail, and as a clown at birthday parties.

Smollett talking about some of the films he was in as a child. Mentions his role in Mighty Ducks. @cbschicago

The actor later told jurors how he landed a role on the Fox show “Empire,” on which he was starring at the time of the attack. Smollett said his older sister had sent him an idea for creator Lee Daniels’ idea for the show, and he really wanted the role of Jamal Lyon, a gay singer, sending Daniels a message why he would be a perfect fit for the role.

Smollett asked by defense attorney about how he felt about the attention the show was received. He testified over 30 Millions viewers.

Smollett also testified about meeting Abel Osundairo at a club during season 4 of “Empire,” telling the jury he and Osundairo did drugs together in the bathroom.

“I always have weed on me… well, not now,” Smollett testified, “And he (Abel) had the cocaine.”

Smollett said the two later went to a bathhouse in Boystown, where gay pornography was displayed on television screens. He said he had never been to the bathhouse before, but got a private room with Abel, where the two “did more drugs and made out.” Later, at a different bathhouse encounter, Smollett said the two made out again and masturbated together.

Last week, Abel denied ever dating Smollett, and said he did not believe there was any sexual tension between the two. The defense also has sought to paint Abel’s brother, Ola, as homophobic.

Meantime, Smollett also testified that, after they first met, he and Abel would regularly drive around and smoke weed together.

Asked if he regretted his drug use, Smollett said, “Yes, I’m sitting in court in front of a jury and my mom explaining it. Of course.”

Defense attorney Nenye Uche was apparently trying to debunk the prosecution’s theory that Smollett met with the Osundairo brothers a few days before the attack for a “dry run” of the attack. Smollett’s car was caught on camera picking up Abel and driving back to the scene of the reported attack, and his defense team sought to establish it was normal for the two of them to drive around and smoke pot. Smollett testified, after becoming friends with Abel, he paid Abel to help him with training and meal plans, after “Empire” creator Lee Daniels told him he was overweight, and needed to lose 30 pounds before coming on set. Smollett said he had to be shirtless for a music video he was shooting, and it was important to get into shape.

Smollett said he agreed to pay Abel $3,500, because it was the same $100 per day rate he’d paid to his previous trainer. He said it wasn’t unusual to pay a trainer thousands of dollars at once, and jurors were shown an invoice for $5,000 he’d one paid to a previous trainer.

However, Osundairo and his brother previously testified the $3,500 check they got from Smollett was to stage the attack in Streeterville.

Smollett also said Abel told him he could get an illegal herbal supplement that is available in Nigeria, but not the U.S. He said a text message he sent to Abel days before the attack to “meet on the low” was for that illegal weight loss supplement, not to plan a fake attack.

While Smollett described a friendly and romantic relationship with Abel Osundairo, he said he felt weird around Abel’s brother, Ola, saying he wouldn’t talk to Smollett when they were together.

“He didn’t like me or he wasn’t feeling me — it’s fine,” Smollett said.

Smollett’s defense team has sought to paint Ola Osundairo as homophobic, suggesting that as a motive for the brothers to really attack Smollett.

Before Smollett took the stand on Monday, jurors also heard from Sheraton Hotel security guard Anthony Moore, who was working at the hotel on the night of the incident.

Moore testified that, around the time of the attack, he saw a white man in a ski mask running past him, followed by a second man, who he didn’t get a good look at. He then saw a third person from a distance.

When questioned by the defense, Moore was adamant he saw a white man.

However, the two men accused of beating Smollett — the Osundairo brothers — are both Black, and no one has disputed they were the ones who attacked Smollett; the only real question at trial is whether or not Smollett paid them to stage it.

The special prosecutor called the Osundairo brothers to the witness stand on Wednesday and Thursday.

In a series of bombshell questions during the brothers’ testimony, attorneys for Smollett suggested that Abel Osundairo had a secret romantic relationship with Smollett. Abel denied those claims, and he kept his composure as attorneys peppered with questions about his character.

Their statements came as drama mounted in the courtroom with defense attorney Tamara Walker asking for a mistrial because of a comment Judge James Linn made.

Walker began crying and accused judge Linn of physically lunging at her in the courtroom during a sidebar conversation.

The jury was not present when the purported lunge took place, so it will not have an effect on the trial.

CBS 2 Legal Analyst Irv Miller said he has never heard an attorney make such allegations against a judge.

Judge Linn denied the allegations and request for a mistrial.

The jury is expected to get the case Monday or Tuesday.