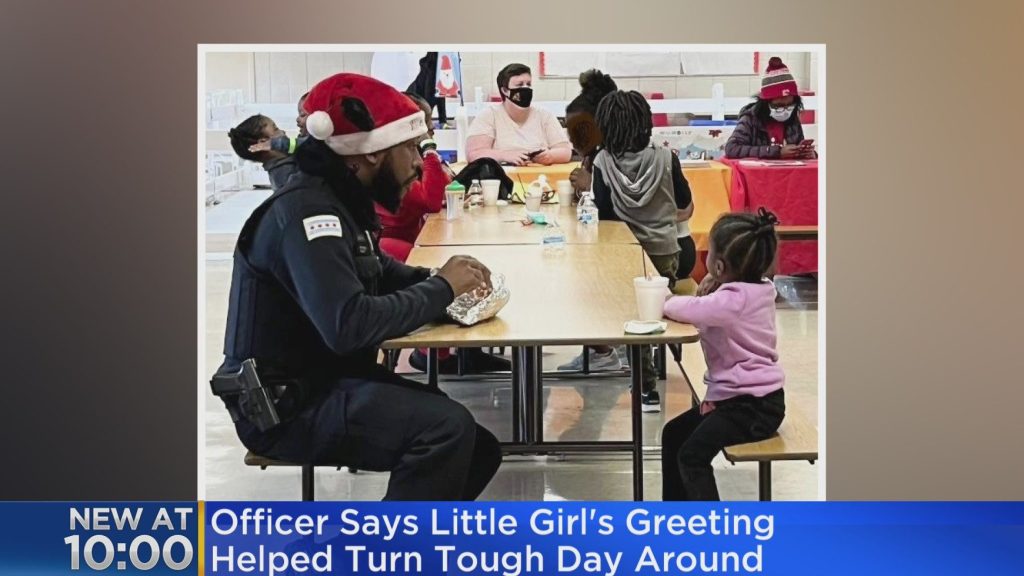 CHICAGO (CBS) — A Chicago police officer, sitting across the table from a little girl, the picture that went viral on social media. The officer originally posted it after a tough day on the job.

He tells CBS 2’s Jermont Terry the girl reminded him what was important.

On this Christmas Eve, so many people reflect on the year. Yet, Kenneth Griffin’s thoughts go back to when he joined the Chicago Police Department four years ago.

“After growing up in Englewood and seeing all the things that happened in my neighborhood as it relates to policing, I wanted to be part of the solution,” Griffin said.

He knows sometimes cops don’t get a warm hello.

“It’s always gonna be process trying to show people that there are a lot of us out here that really care,” he said.

This picture snapped this week — of Officer Griffin sitting across from a child is a different narrative.

“She said ‘How you doing officer’”

That greeting would turn out to be so needed.

It was the most amazing feeling in the world to get comfort from a kid.

About an hour before he sat at the table wearing a Santa hat, Officer Griffin stood on a front porch wiping tears in West Pullman.

“All I heard was the mother crying and yelling saying her baby was still in the house,” he said.

He responded to a deadly house fire where a 2-year-old boy died.

After consoling the mother and family.

“I went to my car and broke down crying,” he said.

Yet, his day was not over. He still had a school event to attend, one he wasn’t up for.

So, when Officer Griffin sat down and the toddler joined, it was a conversation the cop needed.

“It’s like she noticed something was going on with me. She noticed I was hurt,” he said.

Someone captured the moment and Officer Griffin shared how this little girl brighten his day on Instagram.

Kenneth: “And that young girl saw the uniform.”

Jermont: “But she saw more than just a man in the uniform?”

And he hopes during the holiday season so many can remember we all have hearts, even cops that need care.

“By the end of the conversation she ended up telling me just so you know this is a best friend’s date, and I laughed. She said I was her best friend. I’ll take it,” he said.

Officer Griffin is giving back. He purchased a trunkload of toys for the children who lost their brother in that house fire. He plans to hand them out on Christmas to brighten their day.