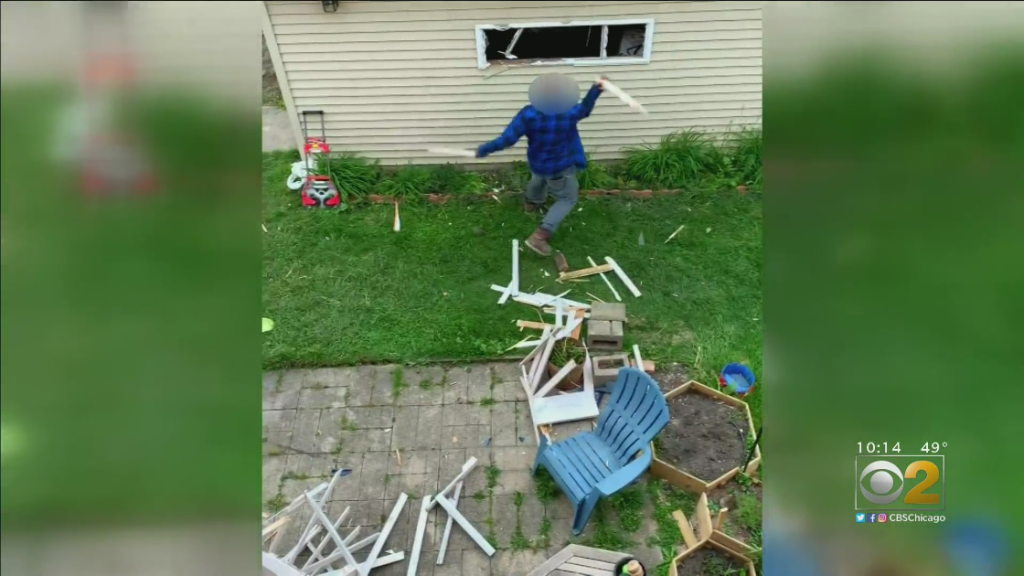 FOREST PARK, Ill. (CBS) — A suburban backyard was left in tatters with the garage and furniture hacked apart – and you won’t believe who was responsible.

As CBS 2’s Tim McNicholas reported, Jonathan Moody does not need video to remind him of May 15 – but there is video of what happened.

“What are you doing?” his wife is heard yelling in horror as a man smashes the windows and siding on their garage – with their patio furniture already lying wrecked behind the man.

“It brings up just a lot of the trauma of that day,” Moody said.

He can’t forget it, thanks to the missing window and cracked siding that greet him in his backyard each morning now.

“Especially for my wife, she’s had a really hard time with it,” Moody said. “She’s having trouble sleeping, she’s barricading the doors at night sometimes. We ended up going to therapy for trauma, and it’s just been really rough on her.”

The story starts in April, when the Moodys were looking for a contractor for improvements to their home in Forest Park. The search took them to HomeAdvisor.com, a website that claims to match homeowners with trusted local pros for any home project.

HomeAdvisor even boasts of an “extensive screening process to ensure every business in our network is reputable.”

“I felt like this was a great way to get a quality contractor to do this work,” Moody said.

But quality is far from what Moody got.

“While he was packing up his tools, he just started screaming and yelling – and broke all the patio furniture and threw it through the windows of the garage,” Moody said.

Moody said he was not satisfied with the work the contractor did before the rampage. Nonetheless, Moody had already paid the contractor in full, and has no idea why he did such a thing.

The couple asked us to hide the contractor’s identity, because they don’t want to anger him any further.

In a police report, an officer described the contractor as “physically violent,” “sweating profusely,” “frothing at the mouth,” and possibly “in a state of delirium” – so paramedics took him to a hospital.

“We really don’t want to give him any more reason to come back,” Moody said.

After the incident, Moody started to wonder about HomeAdvisor’s “extensive screening process.”

We did our own background check and found the contractor’s criminal history. He was found guilty of felony burglary in 2008.

Moody did some digging as well, and discovered another customer complained to HomeAdvisor about poor workmanship from the same contractor in April – before HomeAdvisor matched him within the Moodys.

That other customer is now suing the contractor.

“This all could have been avoided if they just did what they advertise that they do,” Moody said. “These contractors are coming into your home. This is a safety issue for each of the users of this platform, and I think they really need to take that seriously.”

HomeAdvisor and its parent company Angi would not agree to an interview.

A spokesperson told us in an email their screening process allows for certain felony convictions if they’re at least seven years old — including that 2008 burglary conviction.

As for the prior complaint? The company said they started to investigate it on April 29, and they suspended the contractor on May 3 – a day before Moody would pay for the project through the Angi app.

A suspension means no new work can begin, but already-scheduled projects like Moody’s are allowed to proceed.

And no one told the Moodys about that first complaint.

The Moodys kept their appointment, and on May 15, the “trusted local pro” wrapped up his work, grabbed his tools, and then went on that backyard rampage.

“It seems like they should have removed him, or at least suspended him from the service immediately when that happened,” Moody said, “and I think they should contact the other clients that he has – the other referrals that have been made – so that they know what to expect.”

HomeAdvisor says they finally booted the contractor from their platform for good after they saw the Moodys’ video. But by then, the Moodys’ backyard was already trashed.

“There like was a metal pole at one point that he started using to hack at the garage,” Moody said.

Now, Moody is in a months-long back and forth with HomeAdvisor.

The company offered to pay for the damage to the garage and for the shoddy work that needs to be redone, but they and Moody are thousands of dollars apart on what the dollar amount should be.

So for now, Moody said, “We really feel like we’ve lost a lot of our security living in this neighborhood – it doesn’t feel, like, safe anymore.”

And he is stuck with those daily reminders of a day he’d rather forget.

HomeAdvisor says they are disheartened by this incident, which they call rare. The company says their offer to the family went above and beyond the scope of the original project, but again, the Moodys disagree.

HomeAdvisor’s full statement is as follows:

“HomeAdvisor has a thorough screening process, including a criminal background check on the owner or principal of the business, which this particular pro passed due to his conviction falling outside of our 7-year lookback period. We provide our customers with options of vetted, qualified pros to complete the specific projects they need done in their homes. We also provide coverage for projects booked and paid through our platform. Ultimately, you’re hiring the pro for work you need done, and we provide an easier, better way to do so.

“We were as disheartened as you to hear about this incident and have worked hard to try to make it right over the past few months, but unfortunately the customer has declined our offers, which covered above and beyond the scope of original project. We take customer complaints very seriously and this situation was no different. This contractor has been removed from our network to ensure this doesn’t happen to anyone else.

“This was a rare instance, but we assure you that we did and will always do our part by screening the pros on our network, holding them and their work to high standards, and backing your projects when they’re booked and paid through our platform.”