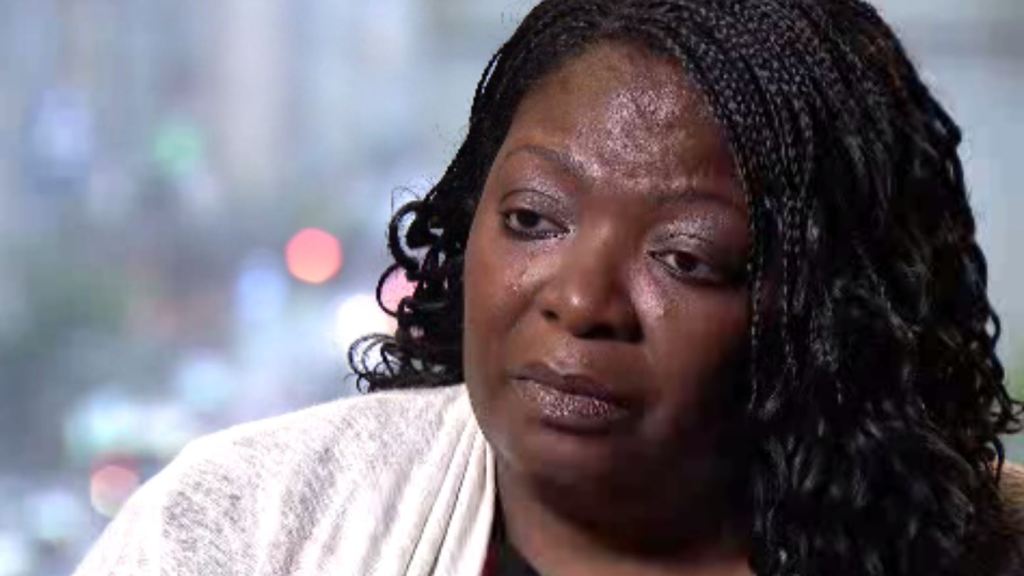 CHICAGO (CBS) — The city’s top watchdog has released a blistering report about how the city handled the aftermath of the botched police raid on Anjanette Young’s home, detailing the extent of misconduct carried out by multiple city agencies, including Mayor Lori Lightfoot’s office, Chicago Police Department, and the Civilian Office of Police Accountability.

The findings come one month after the City Council approved a $2.9 million settlement with Anjanette Young, the innocent social worker who was handcuffed naked during a wrongful police raid nearly three years ago.

As part of its latest quarterly report, the city’s Office of Inspector General included a summary report of its investigation into the city’s response to the botched raid. The findings are damning and continue to prove how individuals across CPD, the mayor’s office, and COPA worked to cover up the video and minimized what happened, by failing to report it and also by issuing blanket denials of the video.

The report says the “inefficient and wasteful management fell into three categories: false or unfounded statements; disregard for COPA’s role and independence; and unbecoming conduct by [Law Department] personnel.”

The inspector general’s office reviewed thousands of emails as part of its probe, and conducted three dozen interviews with city employees.

The report does not include any recommendations for disciplinary action against city employees. However, the inspector general’s office said that is due in part to the fact that 20 of the employees in question have already resigned or been forced out, but it also note that Lightfoot’s decision to enlist an outside law firm – Jones Day – to conduct a separate review of the Young case. Jones Day’s investigation found Lightfoot did not purposely conceal information about the Young case, but the inspector general’s office said that probe hampered its own investigation of the city’s response to the raid.

According to the inspector general’s report, most of the people interviewed by the its office also were questioned by Jones Day, and city attorneys objected to any questions regarding the content of the interviews with Jones Day. The law firm also rejected the OGI’s request for information and documents generated by their review of the case, claiming attorney-client privilege with the city.

“In addition to raising transparency concerns, this also prevented OIG from assessing the full nature, scope, and effect of the Jones Day investigation. Faced with the legally insurmountable obstacle of attorney-client privilege, OIG could not examine the parallel evidence and interview reports of the same witnesses who spoke with OIG, could not determine whether undisclosed interviews corroborated or contradicted one another, and could not investigate whether Jones Day adduced additional mitigating or aggravating information separate from the evidence collected by OIG,” the report stated.

Given those complications, the inspector general’s office said it wouldn’t be fair to make any disciplinary findings in the case.

“Ultimately, OIG determined that the most appropriate service to provide to the City was the full story—thoroughly documented and sourced—of how the City’s government worked to prevent a victim of what was plainly either official misconduct or error from obtaining video proof of the raid on her home, thereby frustrating her efforts to secure redress for the injuries inflicted on her, however unintentionally, by government actors,” the report stated. “OIG’s investigation revealed a failure of City government that, taken as a whole, adds up to more than a sequence of individual actions by City employees. Many of the Mayor’s Office, COPA, CPD, and DOL employees OIG interviewed played roles in a series of events that violated proper government practices, if not formal policies, and which were exceedingly harmful to Young.”

The inspector general’s report focused entirely on the city’s response to the botched raid, rather than the raid itself, which was investigated by COPA. Multiple officers are facing potential termination or suspension for their roles in the raid.

As for the city’s response to the raid, the inspector general’s office said it “uncovered a troubling series of unfounded statements, internal and external disregard for the role and independence of COPA, and a [Department of Law] team whose approach to the case led to conduct unbecoming in the form of disrespectful treatment of opposing counsel and the plaintiff.”

“City government failed to appropriately respond to a victim of a CPD wrong raid, failed to act with transparency in City operations, and performed a series of governmental actions in a manner that prioritized communications and public relations concerns over the higher mission of City government,” the report stated. “OIG’s investigation revealed the inefficient and wasteful management of the City’s response to a wrong raid. The investigation found that actions taken by current and former City employees implicated numerous rules of conduct and took place within a larger failure of the City’s administrative systems to respond to Young’s wrong raid and subsequent requests for information.”

For example, the report said that a member of the mayor’s press team falsely suggested COPA’s investigation of the raid was opened when Young filed a lawsuit against the city in August 2019, when in fact the agency did not begin investigating the case until three months later.

That assistant press secretary also “feigned ignorance over whether the open COPA case would have any effect” on the city’s response to Young’s FOIA request for body camera video footage of the raid.

“While the assistant press secretary was not legally required to tell the truth to or avoid misleading reporters, their conduct demonstrated a willingness to allow and encourage false narratives to enter the public sphere and an apparent intent to mislead a reporter inquiring about a story of significant public interest,” the report stated.

After Young filed her lawsuit over the raid, the city’s Law Department asked CPD for body camera footage of the raid, but CPD’s legal affairs office never fulfilled that request. Instead, an assistant corporation counsel sent a CPD member detailed to the Law Department to retrieve the footage, retrieving 14 videos.

The report said, while that procedure was not standard protocol, the assistant corporation counsel said they did it because their supervisor “came to my office and said the Mayor’s Office is freaking out about this case, why don’t we have a video.”

When a judge later ordered the city to turn over the forage to Young’s attorney in February 2020, the law department turned over those 14 videos on a flash drive, but the Law Department didn’t first conduct a sufficient search or follow up to ensure it had acquired all body camera footage of the raid, despite a judge’s order to do so. The city later turned over six additional videos that were discovered.

The report also noted that Lightfoot herself made misleading statements about what she knew about the raid. In December 2020, when Lightfoot first apologized to Young for the raid, the mayor said she had only recently been informed of the case even though the raid itself happened in February 2019, and CBS 2 first began reporting on her case in November 2019.

However, a day after that apology, Lightfoot admitted that her staff informed her that Young’s case and other wrong raids were brought to her attention in November of 2019. However, she said she didn’t have any recollection of that briefing.

“Regardless of whether the Mayor recalled these conversations or information, the release of a public and declarative denial of any prior knowledge of the Young raid by the Mayor’s press office lacked the appropriate due diligence and fact-checking, and created an incomplete and inaccurate depiction to the public and the media of the City’s prior discussions of the wrong raid,” the report stated.

The report also found that several senior officials at CPD failed to promptly inform COPA of the botched raid, even after a CPD commander who spoke to Young’s pastor informed them about it.

“As leaders of CPD—and as some of the first City officials besides the participating CPD members to learn of the raid—the failure of CPD senior officials to report or ensure the reporting of the wrong raid for investigation implicated the CPD rules and regulations requiring members to ‘report promptly’ to COPA such actions, and to ‘report … any other improper conduct,’ and therefore likewise implicates a ‘failure to promote the Department’s efforts to … accomplish its goals.’

Likewise, the report found that several employees of the Law Department and the Mayor’s office who were informed about the botched raid notified COPA about the incident until one of the mayor’s assistant press secretaries reached out to COPA’s spokesperson to ask about Young as part of the response to Young’s and CBS 2’s FOIA requests for body camera footage.

As the CBS 2 Investigators have previously reported, COPA did not open an investigation into Young’s case until nine months after the raid, after CBS 2 first broke the story of the botched raid.

According to the report, COPA’s top attorney tasked a paralegal with overseeing the response to the FOIA request, and instructed them to tell CPD to issue blanket denials, claiming releasing the videos would interfere with COPA proceedings, even though the paralegal had not consulted anyone involved in the case, and had no idea if releasing the videos would actually interfere with the investigation.

“OIG determined that COPA’s general counsel’s assignment to paralegals of the weight and responsibility of responding to CPD requests—especially along with the surreptitious instruction to provide blanket, boilerplate responses—failed to live up to the standards required for a supervisor and top legal counsel to a City department,” the report stated.

The report also faulted COPA leadership for coordinating with the mayor’s office while preparing to testify about the case at a public hearing by the City Council, including prep sessions and having the mayor’s office provide suggested changes to prepared testimony.

“The COPA chief administrator’s coordination with [mayor’s office] staff in the preparation of public testimony and written answers to the City Council created the appearance of political influence and diminished institutional independence of COPA,” the report stated.

The report also found city attorneys engaged in “conduct unbecoming City employees” during negotiations with Young’s attorneys on an eventual settlement of her lawsuit, including a former assistant corporation counsel who “repeatedly disparaged Young’s attorney, describing the attorney’s conduct as ‘a public extortion campaign,’” and accused Young’s lawyer of “making ‘some kind of emotional arguments over why he should get the video.’”

According to the report, the Law Department has agreed to implement several reforms, including a new values statement to be presented to all employees, new training on employees’ duties to both city government and the public, creating a new policy manual, and working with COPA to create a clear policy on requirements for prompt notification of lawsuits against the city.

CBS 2 has reached out to the mayor’s office, COPA, CPD, and the Law Department for a response to the inspector general’s report.