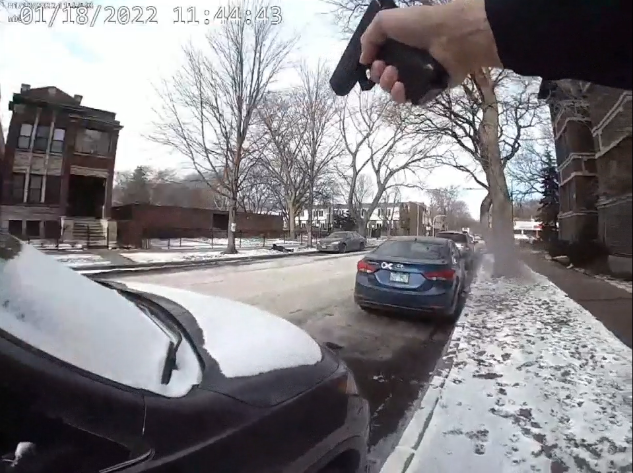 While announcing attempted murder and other charges against 28-year-old Rhysheen Wilson in this week’s shooting near 53rd Street and Woodlawn Avenue, the university also identified the officer who shot him as Nicolas Twardak, who has been with the UCPD since 2016.

According to the university, Twardak is the same officer who shot Charles Thomas in April 2018, after Thomas was seen walking up and down Kimbark Avenue between 53rd and 55th streets bashing cars and apartment building doors with a large pipe or crowbar.

When police responded, they confronted Thomas in an alley, Twardak shot him in the shoulder when Thomas refused to drop the weapon and charged at officers.

Thomas’ mother has said she believes her son was having a mental health episode, and the shooting prompted protest marches on campus.

A review by the Chicago Police Department and the university found Twardak’s actions “were consistent with applicable law,” according to the university.

In this week’s incident, Wilson has been charged with one count each of attempted murder of a police officer, aggravated discharge of a firearm, and aggravated unauthorized use of a weapon.

The University has said Twardak was on patrol around 11:40 a.m. Tuesday, heading north on Woodlawn Avenue, when he saw Wilson running south on Woodlawn near 53rd Street, holding a handgun.

Officials said Twardak stopped his patrol car just south of 53rd Street, and Wilson started shooting, prompting the officer to take cover, tell the man to get on the ground, and then return fire.

Body camera footage released on Wednesday shows Twardak standing on the stoop of a residential building on Woodlawn Avenue, shouting at Wilson to “get on the ground.”

A few seconds later, a series of gunshots can be heard, although it’s unclear from the video who is firing each shot, Twardak or Wilson.

At one point, Wilson is seen walking in the street and can be seen staggering as more gunshots ring out.

Twardak then walks down the steps and takes cover behind a parked minivan, repeatedly telling the man to “get on the ground.”

Twardak appears to fire at least four more shots from behind the minivan, and requesting help over his radio, before seeing the gunman lying on the ground in the parkway across the street.

UCPD also released video footage from two cameras at the nearby Kimbark Plaza Shopping Center. One shows Wilson walking down the sidewalk, holding a pistol. The other shows the shootout from down the block.

Cell phone video posted on social media on Tuesday showed Wilson falling to the ground in the street, before getting back up, and collapsing again on the nearby parkway.

Wilson was taken to University of Chicago Medical Center in critical condition. He is not affiliated with the university, according to a university spokesman.

No other injuries were reported.

This week’s shooting remains under investigation, and Twardak has been placed on mandatory administrative leave.

Twardak has been with UCPD since 2016, and in addition to his patrol duties, has been assigned as a field training officer and bike officer, according to the university.