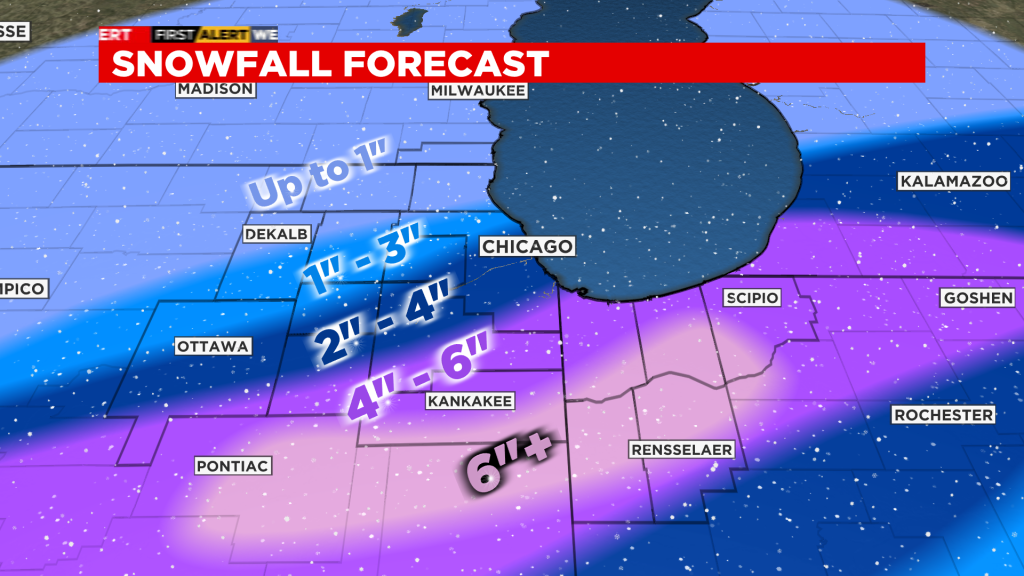 A Winter Storm Warning is in effect for areas to the south and southeast on the city. This warning does not include Cook County.

Winter Storm WARNING in effect until 9PM this evening . A bulk of the snow falls south and east of Chicago. Near blizzard conditions are expected this afternoon and early this evening for areas under warning. 6"+ of snow expected. @cbschicago pic.twitter.com/IU0dCESegK

Chicago snow totals will range from 2 to 6 inches, but heaviest snow will fall to the south with between 4 to 8 inches expected. Snow wraps up by 9 p.m. or 10 p.m. The snow began falling in the far southern suburbs shortly before noon. The most intense snow in Chicago will be between 3 p.m. and 7 p.m. On Thursday afternoon, blizzard conditions were developing south of a line from Pontiac, Illinois, to Valparaiso, Indiana. Lake effect now will continue for LaPorte and Porter Counties past midnight. Conditions in Indiana became treacherous by early afternoon. Interstate 65 south was packed with snow and all lanes were closed at mile marker 234 in Newton County because of a crash.

All lanes of southbound I-65 are closed at MM 234 (south of SR 2, north of SR 10) due to a crash. As you can see, road conditions are quickly deteriorating. Avoid unnecessary travel. pic.twitter.com/0r8Qr8cMPg

Farther south, in Monticello, Ind., flooding is becoming a major concern.  Here is a look at Oakdale Dam along the Tippecanoe River.

This is currently what Oakdale Dam is looking like. I just spoke with the Carroll County EMA Director who tells me he’s expecting things to get worse, flooding wise, over the next few days here.

I was the passenger in the car when taking this video. @wrtv pic.twitter.com/KUQAAWOZm4

Back in Chicago, the Department of Streets and Sanitation has dispatched 287 plows to clear snow and spread salt through the afternoon and into the evening. The plows will focus on DuSable Lake Shore Drive and other main roads.

To view watch the snow fleet in real time, go to this link.

On Friday, high temperatures reach the upper 20s underneath a mostly to partly sunny sky.

Temps look to rebound back into the 40s by Sunday.