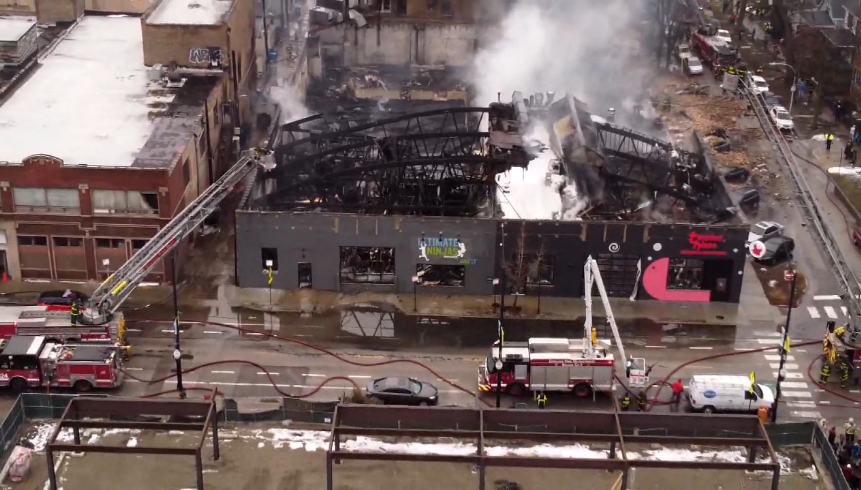 by Marissa Parra and Mugo Odigwe

More than 150 firefighters responded to the blaze at the corner of Montrose Avenue and Richmond Street.

Too unsafe to bring firefighters inside which is why they’re keeping us further away + fought fire from above @cbschicago pic.twitter.com/j0jE3QDWAC

Fire Department officials believe the fire started around 3:30 a.m. in a 3-story apartment building at 4337-39 N. Richmond St., and then spread to a neighboring building, which housed Twisted Hippo Taproom and Eatery, and Ultimate Ninjas gym.

Firefighters have their work cut out for them this morning

Wind, cold and a roof truss on a larger building containing nitrogen / CO2 tanks have made this a tough fight, they say

Five hours after the fire started, firefighters were still pouring water on the building from above and below, calling it a “surround and drown” tactic, but crews had to be careful to stay away because of the danger.

“The building itself is a one-story truss roof. To us, it is the most dangerous type of building to fight. So precautions are taken, collapse zones are set up,” said Chicago Fire Department Deputy District Chief Thomas Carbonneau.

Several cars were left buried under rubble after part of the roof and a large section of the rear wall of the Twisted Hippo collapsed.

Marilee Rutherford, the owner of the Twisted Hippo Brewery, which is now in rubble, spoke to CBS 2’s Marissa Parra as she watched her business continue to burn.

She said she was given the news by her husband, who was called by a community member overnight. When she arrived on the scene, her business engulfed in flames. She said the cause of the explosions might have been the CO2 and nitrogen tanks used for dispensing draft beer.

“We have CO2 and nitrogen tanks, just as a regular part of our business, and I’m certain that’s what the explosions were,” Rutherford said.

She said her focus is on the safety of her staff and the community.

“It’s hard to see everything you worked for go up in flames, but I’m just glad my staff and everyone is okay. That’s all I’m focused on,” Rutherford said.

With tears in her eyes Marilee Rutherford stands in front of the rubble from her brewery, Twisted Hippo

“It’s hard to see everything you worked for go up in flames, but I’m just glad my staff and everyone is okay. That’s all I’m focused on”@cbschicago pic.twitter.com/A1SgRPdHz5

The brewery opened in 2019, and Rutherford said the goal was to create a “light, bright, warm, and inviting space, with a little bit of something for everyone” in the community.

“I think we have done that, but we’ll just have to see how we move forward,” she said.

The Illinois Craft Brewers Guild has set up a GoFundMe page to help the Twisted Hippo and their staff with recovery costs. The page has already raised more than $54,000 towards its $100,000 goal in just the first four hours since it was set up.

The destruction of Ultimate Ninjas is also a big loss for the community. It’s been around for years, and does a lot of work with children. They had camps scheduled for Monday, and were expecting 90 kids to show up, but now both the gym and Twisted Hippo are both a total loss.

Fire Department officials said the fire was struck out around 8:30 a.m., but crews would remain on the scene for several hours to douse hotspots, and prevent the fire from flaring up again. The rest of the building that housed the brewery and gym also will need to be demolished. The neighboring apartment building also was gutted.

The massive fire also affected hundreds of neighbors, as ComEd had to cut off power to about 350 homes and businesses so firefighters could safely fight the fire. Power has since been restored for 228 ComEd customers, and ComEd is waiting for the green light from the Fire Department to restore power to the rest.

Paris Wadhwa said he has been without power and heat since around 4 a.m.

“I have a baby, and a little girl, we’re trying to them in the house, and making sure that they are warm,” he said. “The cooking gas is working, so that’s a good thing, but there’s no heat and no electricity. So we’re hoping that the power comes back on.”

Wadhwa said he was told power should be restored by 12:30 p.m., but he’s really hoping it will be back sooner.

Police said a 60-year-old man was taken to a local hospital for possible smoke inhalation. Several other residents of the apartment building were able to escape safely. The Red Cross is on the scene, assisting five people displaced by the fire.

VIDEO: “I woke up to the sound of explosions, it cracked my window”

A total collapse left cars buried in rubble after a fire on the block— neighbors say they saw it start in apartment bldg next door@cbschicago pic.twitter.com/kzuDa0XE0C