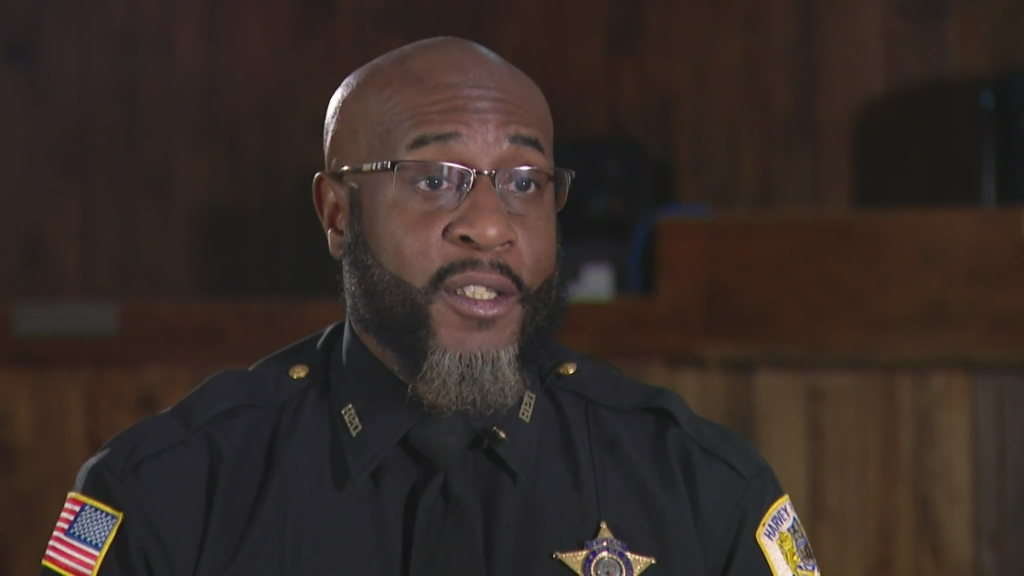 HARVEY, Ill. (CBS) — An off-duty police officer walked into a store in Harvey, only to end up having to take down a youngster threatening someone with a gun.

The suburban officer is being credited with using great restraint in his arrest. He talked exclusively to CBS 2’s Jermont Terry about the split-second decision not to pull the trigger.

On Jan. 24, the “we call police” sign in front of One Stop Food and Liquor store, at 168 E. 154th St. in Harvey, was not enough to keep some trouble away. So when one teen entered, he was unaware that one of the customers was off-duty Harvey police Officer Marcus Patterson.

“It’s a shame our children have replaced PlayStation 5 joysticks with AR-15’s and Glock handguns,” Patterson said.

On surveillance video, Patterson is seen wearing a black and orange hoodie as he stands at the counter. The officer overheard and then witnessed something serious.

Officer Patterson figured he would approach the young man outside, but the situation got worse once at the corner of 154th Street and Center Avenue.

“There was a car outside waiting for him, and there were multiple juveniles inside that car,” Patterson said. “I didn’t want to get tunnel vision dealing with him and not knowing what those in the car was going to do.”

When Patterson went back inside the store, his gun was drawn. And just as the teen grabbed a bag, he threw his hands up. As he did, a gun dropped to the floor – the very same weapon he’d been hiding in his jacket – with an enormous extended clip.

“He went down to retrieve it,” Patterson said.

Patterson tackled the teen and took him into custody, But despite the teen still reaching for the gun, Patterson refrained from firing.

“I believe if you have 10 officers in the same situation, 60 percent of them would have shot him,” Patterson said.

The 18-year Harvey police veteran credits his training and compassion, leading Harvey Mayor Christopher Clark to award him with honors.

“Pride of the action – he took pride of that fact that he thought about the residents. It was service above self,” Mayor Clark said.

“I pray for that young man,” Patterson said. “I hope he’s learned from his transgressions that he had a second opportunity at life.”

And Patterson is grateful he lived to talk about it.

“And I could have killed a 14-year-old,” he said. “That would have bothered me.”

Patterson points out that he did not learn the suspect was 14 years old until after he arrested the boy. Patterson said once handcuffed, the teen kept saying, “I’m just a kid.”

But Patterson said this was a kid with a loaded gun – and who knows what he was going to do with it.