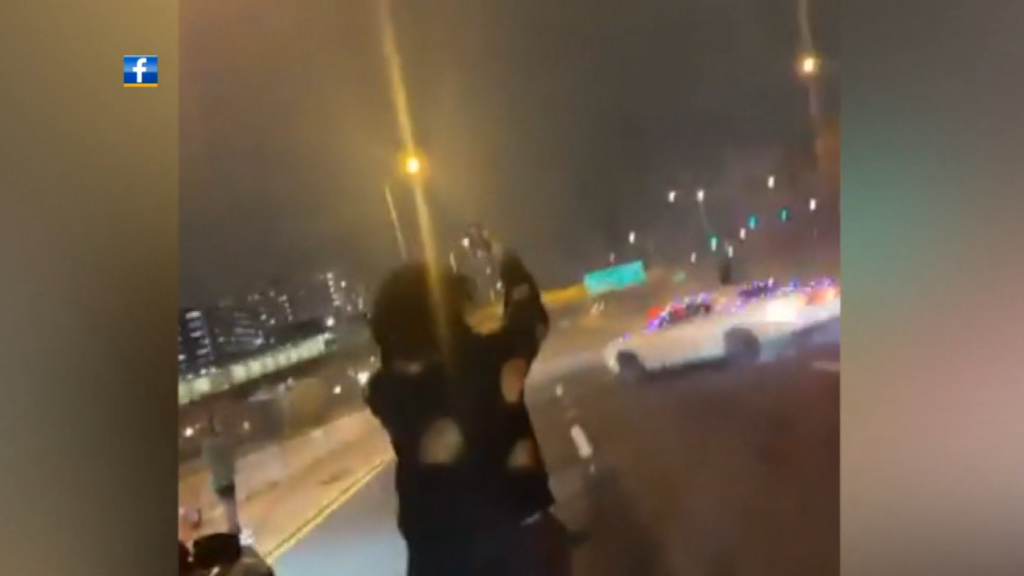 CHICAGO (CBS) — Two men have been charged with shutting down the Eisenhower Expressway in December to perform dangerous stunts on the interstate, during an incident first reported by CBS 2.

Illinois State Police said 20-year-old Matthew Sim, of Hanover Park, and 23-year-old Steven Sanchez, of Bolingbrook, each face charges multiple charges, including reckless driving and reckless conduct, in connection with the incident in the early hours of Dec. 19.

CBS 2’s Jermont Terry reported on the dangerous stunts that drivers were seen pulling off on the Eisenhower Expressway two months ago. It looked like a scene from the “Fast and the Furious” movies, but it was real.

A group of drivers brought traffic to a complete stop on Interstate 290 early on Dec 19, all to perform dangerous stunts and capture the chaos on video, leaving behind tire marks on the pavement.

Video shows people with their phones in hand standing in the middle of the expressway as others used their cars and blocked all the outbound lanes of traffic to take video of a crew doing dangerous stunts.

One person is heard calling it “funny as hell.”

The tire marks left behind on the Eisenhower near Racine Avenue were not just from one vehicle. There were multiple cars.

People were hanging out of car windows to the glory of those recording – all while traffic backed up for the illegal show.

There are various videos that have been shared on social media. One particular live video lasted for more than three minutes – yet it is not clear how long the Ike was shut down.

On Friday, nearly two months after the incident, Illinois State Police announced Sanchez and Sim had been arrested in connection with the stunt.

Police said, on Feb. 4, troopers investigating the incident were conducting an operation when they spotted a vehicle matching the description of one of the cars from the stunt in the parking lot of a Chicago shopping mall, “engaging in reckless driving.”

When that vehicle left the parking lot, it started speeding down a city street, going 85 mph in a 30 mph zone, coming too close to other vehicles, and ignoring at least three red lights. State troopers pulled the vehicle over and arrested the driver, Sim, who was charged in both the incident in the shopping mall parking lot and the one on the Eisenhower. Sim faces two counts of reckless driving, one count of reckless conduct, and one count of driving on a suspended license — all misdemeanors. He also was cited for speeding, improper lane usage, improper stopping on the roadway, and disobeying a traffic control device. He was released on $5,000 bond.

Upon further investigation, police identified Sanchez as another suspect in the December incident, and he turned himself in on Feb. 9. He has been charged with one count of reckless driving and one count of reckless conduct, both misdemeanors. He also was given tickets for speeding, wrong way driving, improper stopping on the roadway, and improper lane usage. He was released on $1,5000 bond.

During the December incident, the crew that shut down the Eisenhower Expressway to pull off driving stunts never encountered a single Illinois State Police trooper. At the time CBS 2 reached out to Illinois State Police to find out how such a thing could happen on one of Chicago’s busiest interstates in the first place.

UPDATE: Illinois State Police released the following answers to our questions, beginning with a statement reading: “On Saturday night into Sunday, 12:22 am, I-290 WB at Racine and had one single call of “reckless drivers.” We had multiple incidents that were occupying our resources in the District.”

Q: Are you aware of the incidents?

A: We are aware of the incident that reportedly took place the evening of Sunday December 19th on I-290 near Racine.

Q: Were there any reports into ISP about the traffic shutdown?

A: We did have one single call reference reckless drivers in the area. At the time Troopers were handling a shooting and we had Troopers investigating multiple crashes throughout the Chicagoland area. We had an ongoing felony arrest with multiple weapons involved. In addition, we had numerous units on traffic stops throughout the District.

Q: Are there cameras installed along this stretch of the expressway that alerted ISP of the problem?

A: We were not alerted by the cameras in the area of an on-going incident.

Q: There are complaints this has happened on many weekends along I290 can you confirm?

A: We have not had previous calls for service for similar reckless driving incidents on or along I-290.

Q: Did ISP investigate the matter? Any arrests/citations?

A: We are continuing to investigate the incident and utilizing investigative resources to take further action.

Q: Where do you stand in investigating this matter?

A: It is a continuing investigation and the ISP is working hard to investigate all available leads. If further information is available to share, we will do so at the appropriate time.

Q: What’s being don’t to prevent this from occurring again?
A: ISP remains committed to utilizing all available resources to safeguard the public. ISP has demonstrated commitment to combatting crime and saving lives by deploying Troopers into the Chicagoland area from all over Illinois on a constant basis since October of 2021- a 169% increase in Trooper presence on Chicago Expressways.

During this expanded enforcement detail, ISP Troopers have made 3696 stops, for 7558 violations, 86 criminal arrests, 67 seized firearms, 176 DUIs, 28 warrants, 1,758 motorist assists and 4252 crashes. We have utilized our Air Ops and K9s and Handlers as a vital tool in our enforcement. Over the past two years, ISP has added 235 Troopers to its ranks, but we continue to work with the General Assembly to obtain much needed funding for more Troopers to staff busy Chicagoland Expressways as well as other expressways throughout Illinois.

The ISP’s hard working Troopers are one of the most versatile public safety tools in Illinois. Troopers fight crime, enhance highway safety, respond to critical incidents and natural disasters and serve to assist other agencies in the name of public safety. Our ISP Troopers are responsible for patrolling over 2,000 expressway miles statewide along with over 15,000 state highway miles. We remain committed to the mission of protecting the public.