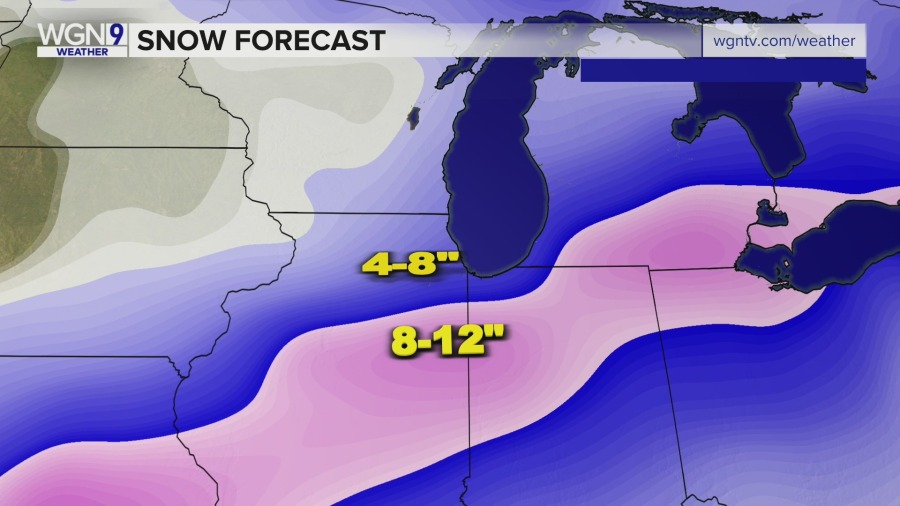 CHICAGO — A Winter Storm Warning will be in in effect for central and southern Cook County, DuPage County, Kendall, Grundy, LaSalle, Will, Kankakee and Northwest Indiana beginning 8 p.m. Tuesday through 6 p.m. Wednesday for the areas highlighted in pink in the map below.

The incoming storm’s precipitation won’t begin as snow. It’s to start off as patchy rain which modeling suggests begins to put in an appearance in the city beginning in the 2 p.m. to 4 pm time frame Tuesday.

The shift to snow is projected to take place in Chicago during the 8 p.m.  to 10 pm time frame.

An extended period of snowfall will arrive in waves over the warning area.

There will essentially be two waves of snowfall. The first, the most widespread and heaviest, occurring Tuesday night up to roughly Wednesday. That’s when snowfall may become more sporadic, particularly away from Lake Michigan Wednesday afternoon and evening. Simply put, areas from Chicago and roughly the I-88 corridor (the East/West Tollway) and south are likely to see most of this storm’s snow.

A second wave of snowfall will affect mainly southern sections of the area except for more selective lake effect snowy spells in lakeside counties of Illinois and northwest Indiana Wednesday night into at least a portion of Thursday.

There is likely to be a huge north/south accumulation spread/differential in the area likely. from just flurries/light snow north toward Rockford to a foot and possibly more South.

It will be a stunning variation in snowfalls, with extremely limited snowfall if any snow at all northwest of the Chicago– toward Rockford, for instance.

By comparison, the city itself is likely to see anywhere from 4 to 10″ of snow by the storm’s conclusion–lightest north and heaviest south, while south suburbs and areas essential from I-57 south and east, including northwest Indiana, may be in for totals of 10-12″ and locally more.

Here are the probabilities of snow reaching certain accumulations through the heart of Chicago between now and late Thursday, when most of this system’s snow will have fallen. Remember, these probabilities apply to the center of the city. Much lower amounts are likely north of Chicago. By contrast, snowfall probabilities are much higher to the south because that’s where the storm’s heaviest totals are expected.

Less than 1″is currently viewed as likely to fall north toward the Wisconsin line; 4 to 9″ in the city–heaviest southern sections; and 10 to 12″ and more is likely to the south of Chicago, including much of northwest Indiana.

Winds will also increase and more selective lake-effect snows with the second wave of snowfall Wednesday night into Thursday.

A hazardous morning commute is expected Wednesday with snow likely spreading northward through the area all morning. It is likely to be a mess for commuters, especially Chicago and anywhere south. Allow extra time and drive with caution.

Feb 1 marks the 11 year anniversary of the infamous Groundhogs Day blizzard of 2011. That’s the storm which arrived with 70 mph winds gusts and thundersnow which, together, produced mammoth drifts and led to colossal traffic jam on Lakeshore Drive which trapped some motorists for 12 or more hours. It produced 21.2″ of snow in Chicago.

Three of Chicago’s five top snowstorms have occurred in this January/early February period, so to have a winter storm on its way at this time of year is hardly an anomaly.

All of us who have lived in the area for some time remember the Jane Bryne/Michael Bilandic Blizzard of ’79 which hit with 20.3″ on January 14-15, 1979 and the infamous Blizzard of ’67 and its 23″ of snow which literally shut the city down stranding buses and car on area thoroughfares.

The incoming storm will include strengthening winds. “NNE” wind gusts are to build to 40 mph adding to area weather woes–but won’t reach the 70 mph velocities observed in the 2011 Groundhogs Day storm. 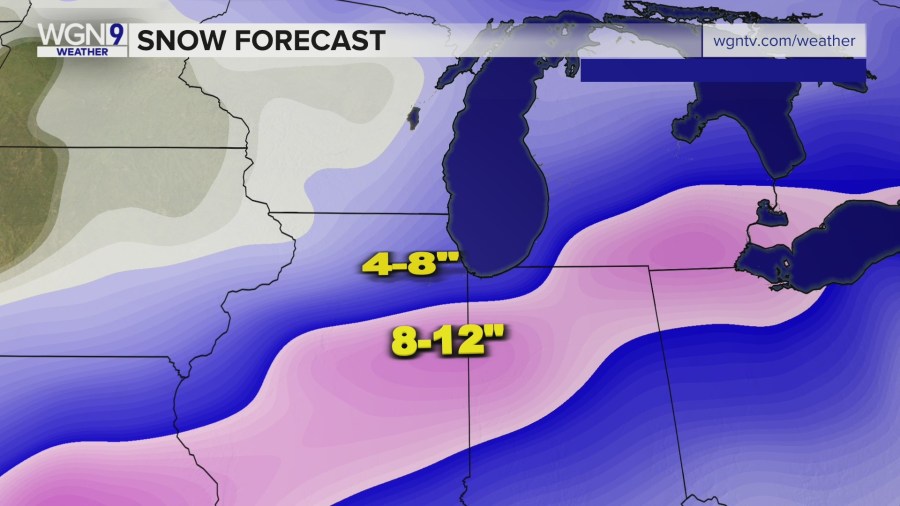