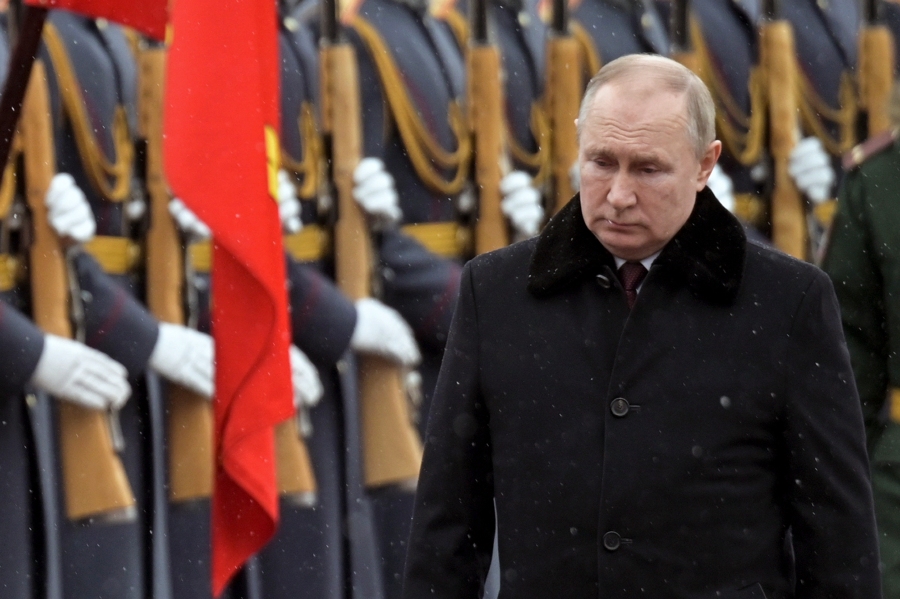 BRUSSELS (AP) — The Biden administration announced Friday that it will move to freeze the assets of President Vladimir Putin and Foreign Minister Sergey Lavrov, following the European Union and Britain in directly sanctioning top Russian leadership.

It wasn’t immediately clear how impactful an asset freeze would be on Putin or Lavrov, but the direct action targeting the Russian president was meant to be seen as a warning to Putin that he could emerge as an international pariah if he doesn’t end the invasion of Ukraine.

KYIV, Ukraine (AP) — Russian troops bore down on Ukraine’s capital Friday, with gunfire and explosions resonating ever closer to the government quarter, in an invasion of a democratic country that has fueled fears of wider war in Europe and triggered worldwide efforts to make Russia stop.

With reports of hundreds of casualties from the warfare — including shelling that sliced through a Kyiv apartment building and pummeled bridges and schools — there also were growing signs that Vladimir Putin’s Russia may be seeking to overthrow Ukraine’s government. It would be his boldest effort yet to redraw the world map and revive Moscow’s Cold War-era influence.

U.S. President Joe Biden and his NATO counterparts agreed at an urgent meeting to send parts of the organization’s response force to help protect its member nations in the east. NATO didn’t say how many troops would be deployed.

In the fog of war, it was unclear how much of Ukraine remains under Ukrainian control and how much or little Russian forces have seized. The Kremlin accepted Kyiv’s offer to hold talks, but it appeared to be an effort to squeeze concessions out of Ukraine’s embattled president instead of a gesture toward a diplomatic solution.

Day 2 of Russia’s invasion, the largest ground war in Europe since World War II, focused on the Ukrainian capital, where Associated Press reporters heard explosions starting before dawn and gunfire was reported in several areas.

Russia’s military said it had seized a strategic airport outside Kyiv, allowing it to quickly build up forces to take the capital. It claimed to have already cut the city off from the west — the direction taken by many of those escaping the invasion, leading to lines of cars snaking toward the Polish border.

Russia’s Defense Ministry claimed to have blocked off the cities of Sumy and Konotop and that the offensive had claimed dozens of Ukrainian military assets. The statement could not be independently confirmed.

Intense gunfire broke out on a bridge across the Dneiper River dividing eastern and western Kyiv, with about 200 Ukrainian forces taking defensive positions and sheltering behind their armored vehicles and under the bridge. Another key bridge leading to the capital was blown away, with smoke rising from it.

Ukrainian officials reported at least 137 deaths on their side and claimed hundreds on the Russian one. Russian authorities released no casualty figures, and it was not possible to verify the tolls.

U.N. officials reported 25 civilian deaths, mostly from shelling and airstrikes, and said that 100,000 people were believed to have left their homes, estimating up to 4 million could flee if the fighting escalates.

“When bombs fall on Kyiv, it happens in Europe, not just in Ukraine,” Ukrainian President Volodymyr Zelenskyy said, pleading for Western assistance. “When missiles kill our people, they kill all Europeans.”

His whereabouts were kept secret after telling European leaders in a call Thursday night that he was Russia’s No. 1 target — and that they might not see him again alive. His office later released a video of him standing with senior aides outside the presidential office, saying he and other government officials would stay in the capital.

“All of us are here protecting our independence of our country,” Zelenskyy said. “And it will continue to be this way. Glory to our defenders, Glory to Ukraine, Glory to Heroes.”

A U.S. defense official said a Russian amphibious assault was underway, and thousands of Russian naval infantry were moving ashore from the Sea of Azov, west of Mariupol. The official said Ukrainian air defenses have been degraded but are still operating, and that about a third of the combat power that Russia had massed around Ukraine is now in the country. All told, the official estimated Russia had fired more than 200 missiles into Ukraine, with some hitting residential areas.

A senior American intelligence official with direct knowledge of current intelligence assessments told the AP that Russian armor is 50 kilometers (31 miles) to both the north and west of Kyiv.

Zelenskyy offered to negotiate on a key Putin demand: that Ukraine declare itself neutral and abandon its ambition of joining NATO. The Kremlin initially said it was ready to send a delegation to Belarus, then later backpedaled, saying it preferred to meet in Warsaw. Russian Foreign Minister Sergey Lavrov suggested it was too late, saying Zelenskyy should have agreed to talks earlier on.

The assault was anticipated for weeks by the U.S. and Western allies and denied to be in the works just as long by Putin. He argued the West left him with no other choice by refusing to negotiate Russia’s security demands.

In a window into how the increasingly isolated Putin views Ukraine and its leadership, he gave a strongly worded statement Friday urging the Ukrainian military to surrender, saying: “We would find it easier to agree with you than with that gang of drug addicts and neo-Nazis who have holed up in Kyiv and have taken the entire Ukrainian people hostage.”

The autocratic leader hasn’t disclosed his ultimate plans for Ukraine. Lavrov gave a hint, saying Friday: “We want to allow the Ukrainian people to determine its own fate.” Putin spokesman Dmitry Peskov said Russia recognizes Zelenskyy as the president, but wouldn’t say how long the Russian military operation could last.

Ukrainians, meanwhile, abruptly adjusted to life under fire, after Russian forces started moving in to their country from three sides in an invasion telegraphed for weeks, as they massed an estimated 150,000 troops nearby.

Residents of a Kyiv apartment building woke to screaming, smoke and flying dust. What the mayor identified as Russian shelling tore off part of the building and ignited a fire.

“What are you doing? What is this?” resident Yurii Zhyhanov asked — a question directed at Russian forces. Like countless other Ukrainians, he grabbed what belongings he could, took his mother, and fled, car alarms wailing behind him.

Elsewhere in Kyiv, the body of a dead soldier lay near an underpass. Fragments of a downed aircraft smoked amid the brick homes of a residential area. Black plastic was draped over body parts found beside them. And people climbed out of bomb shelters, basements and subways to face another day of upheaval.

“We’re all scared and worried. We don’t know what to do then, what’s going to happen in a few days,” said one of the workers, Lucy Vashaka, 20.

AP reporters saw signs of significant fighting near Ivankiv, about 60 kilometers (40 miles) northwest of Kyiv. Russian troops also entered the city of Sumy, near the border with Russia that sits on a highway leading to Kyiv from the east. A Russian missile launcher was seen on the outskirts of Kharkiv in the east.

U.S. Secretary of State Antony Blinken said Kyiv “could well be under siege” in what U.S. officials believe is a brazen attempt by Putin to install his own regime.

Zelenskyy, whose grasp on power was increasingly tenuous, appealed to global leaders for even more severe sanctions than the ones imposed by Western allies and for defense assistance. Zelenskyy cut diplomatic ties with Moscow, declared martial law and ordered a full military mobilization that would last 90 days.

The invasion began early Thursday with missile strikes on cities and military bases, followed by a multipronged ground assault that rolled troops in from separatist-held areas in the east; from the southern region of Crimea, which Russia annexed in 2014; and from Belarus to the north.

After Ukrainian officials said they lost control of the decommissioned Chernobyl nuclear power plant, scene of the world’s worst nuclear disaster, Russia said Friday it was working with the Ukrainians to secure the plant. There was no corroboration of such cooperation from the Ukrainian side.

The European Union slapped asset freezes on Putin and Lavrov themselves, in addition to other sanctions. Britain is freezing the assets of all large Russian banks and planning to bar Russian companies and the Kremlin from raising money on British markets.

“Now we see him for what he is — a bloodstained aggressor who believes in imperial conquest,” Prime Minister Boris Johnson said of Putin. 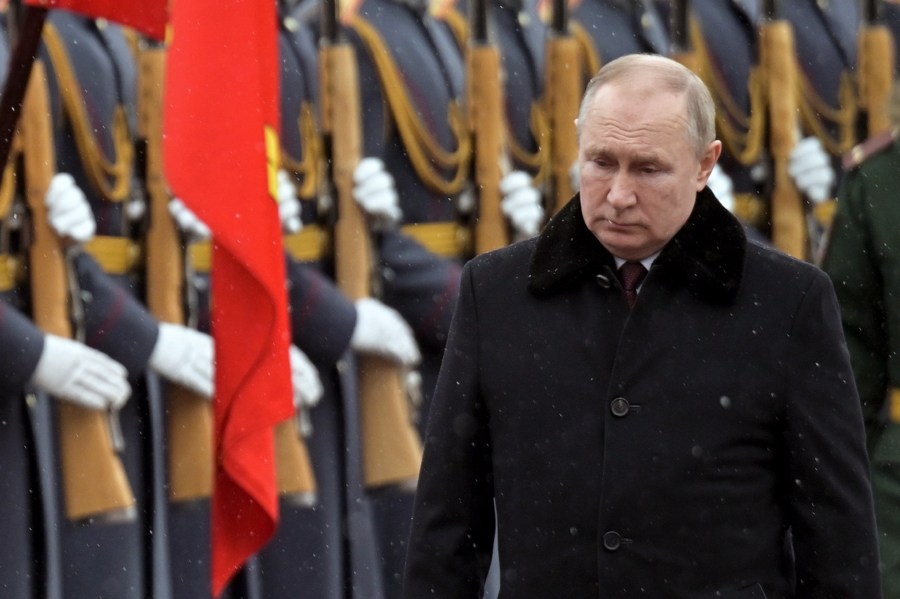