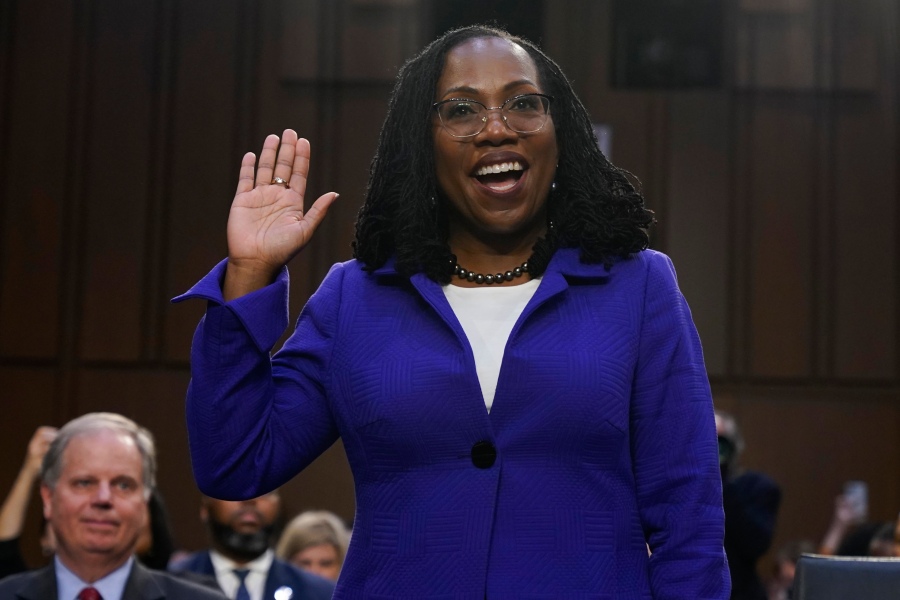 WASHINGTON (AP) — Supreme Court nominee Ketanji Brown Jackson pledged on Monday to decide cases “without fear or favor” if the Senate confirms her historic nomination as the first Black woman on the high court.

Jackson, 51, addressed the Senate Judiciary Committee at the end of her first day of confirmation hearings, nearly four hours almost entirely consumed by opening statements from the panel’s 22 members.

Republicans promised pointed questions over the coming two days, with a special focus on her record on criminal matters. Democrats were full of praise for President Joe Biden’s Supreme Court nominee.

With her family sitting behind her, her husband in socks bearing George Washington’s likeness, Jackson stressed that she has been independent and transparent in her nine years as a judge, and that she is ever mindful of the importance of that role.

“I have dedicated my career to ensuring that the words engraved on the front of the Supreme Court building — and equal justice under law — are a reality and not just an ideal,” she said.

Barring a significant misstep, Democrats who control the Senate by the slimmest of margins intend to wrap up her confirmation before Easter. She would be the third Black justice, after Thurgood Marshall and Clarence Thomas, as well as the first Black woman on the high court.

“It’s not easy being the first. Often, you have to be the best, in some ways the bravest,” Democratic Sen. Dick Durbin of Illinois, the committee chairman, said in support shortly after the proceedings began.

Democrats sought to preemptively rebut Republican criticism of her record on criminal matters as a judge and before that as a federal public defender and a member of the U.S. Sentencing Commission.

Jackson “is not anti-law enforcement,” and is not “soft on crime,” Sen. Pat Leahy, D-Vt., said, noting that members of Jackson’s family have worked in law enforcement and that she has support from some national law enforcement organizations. ”Judge Jackson is no judicial activist.”

The committee’s senior Republican, Sen. Chuck Grassley of Iowa, promised Republicans would “ask tough questions about Jackson’s judicial philosophy,” without turning the hearings into a ”spectacle.”

Sen. Lindsey Graham, R-S.C., noted that Democrats had opposed some past Republican judicial nominees who were Black or Hispanic, and he said that he and his GOP colleagues wouldn’t be deterred from asking probing questions by Jackson’s race.

He said of some criticism from the left: “Bottom line here is, It’s about ‘We’re all racist if we ask hard questions.’ That’s not going to fly with us.”

Graham was one of three Republicans to support Jackson’s confirmation as an appellate judge last year. But he has indicated over the past several weeks that he is unlikely to vote for her again.

Jackson’s testimony will give most Americans, as well as the Senate, their most extensive look yet at the Harvard-trained lawyer with a resume that includes two years as a federal public defender. That makes her the first nominee with significant criminal defense experience since Marshall.

Jackson appeared before the same committee last year, after Biden chose her to fill an opening on the federal appeals court in Washington, just down the hill from the Supreme Court.

The American Bar Association, which evaluates judicial nominees, has given Jackson its highest rating, “well qualified.”

Janette McCarthy Wallace, general counsel of the NAACP, said she was excited to see a Black woman on the verge of a high court seat.

“Representation matters,” Wallace said. “It’s critical to have diverse experience on the bench. It should reflect the rich cultural diversity of this country.”

While few Republicans are likely to vote for Jackson, most GOP senators did not aggressively criticize her, given that her confirmation would not alter the court’s 6-3 conservative majority. Several GOP senators on the panel used their time to denounce Senate Democrats instead of Jackson’s record.

The Republicans are trying to use her nomination to brand Democrats as soft on crime, an emerging theme in GOP midterm election campaigns. Biden has chosen several former public defenders for life-tenured judicial posts. In addition, Jackson served on the U.S. Sentencing Commission, an independent agency created by Congress to reduce disparity in federal prison sentences.

Sen. Josh Hawley, R-Mo., said in his opening statement that his research showed that Jackson had a pattern of issuing lower sentences in child pornography cases, repeating comments he wrote in a Twitter thread last week. The Republican National Committee echoed his claims, which Hawley did not raise when he questioned Jackson last year before voting against her appeals court confirmation.

The White House, along with several Democrats at the hearing, pushed back forcefully against Hawley’s criticism as “toxic and weakly presented misinformation.”

Sentencing expert Douglas Berman, an Ohio State law professor, wrote on his blog that Jackson’s record shows she is skeptical of the range of prison terms recommended for child pornography cases, “but so too were prosecutors in the majority of her cases and so too are district judges nationwide.”

As Jackson silently took notes, Hawley said he would raise his concerns again in questioning over the next two days. He said he found her candid and “enormously thoughtful” in a meeting earlier this month.

Hawley is one of several committee Republicans, along with Ted Cruz of Texas and Tom Cotton of Arkansas, who are potential 2024 presidential candidates, and their aspirations may collide with other Republicans who would prefer not to pursue a scorched-earth approach to Jackson’s nomination.

Biden chose Jackson in February, fulfilling a campaign pledge to nominate a Black woman to the Supreme Court for the first time in American history. She would take the seat of Justice Stephen Breyer, who announced in January that he would retire after 28 years on the court.

Jackson once worked as a law clerk to Breyer early in her legal career.

Democrats are moving quickly to confirm Jackson, even though Breyer’s seat will not officially open until the summer. They have no votes to spare in a 50-50 Senate that they run by virtue of the tiebreaking vote of Vice President Kamala Harris.

But they are not moving as fast as Republicans did when they installed Amy Coney Barrett on the court little more than a month after the death of Justice Ruth Bader Ginsburg and days before the 2020 presidential election.

Barrett, the third of President Donald Trump’s high court picks, entrenched the court’s conservative majority when she took the place of the liberal Ginsburg.

The court revealed Monday that Justice Thomas, the oldest member of the court at 73, was in the hospital being treated for an infection but that he did not have COVID-19.

She is married to Patrick Jackson, a surgeon in Washington, who sat in the audience with their two daughters, one in college and the other in high school. Jackson wiped away tears as his wife expressed her love for him.

She is related by marriage to former House Speaker Paul Ryan of Wisconsin, who was the Republican vice presidential nominee in 2012. Ryan has voiced support for her nomination.

Jackson has said her children have kept her in touch with reality, even as she has held a judge’s gavel since 2013.

In the courtroom, she told an audience in Athens, Georgia, in 2017, “people listen and generally do what I tell them to do.” At home, though, her daughters “make it very clear I know nothing, I should not tell them anything, much less give them any orders, that is, if they talk to me at all.” 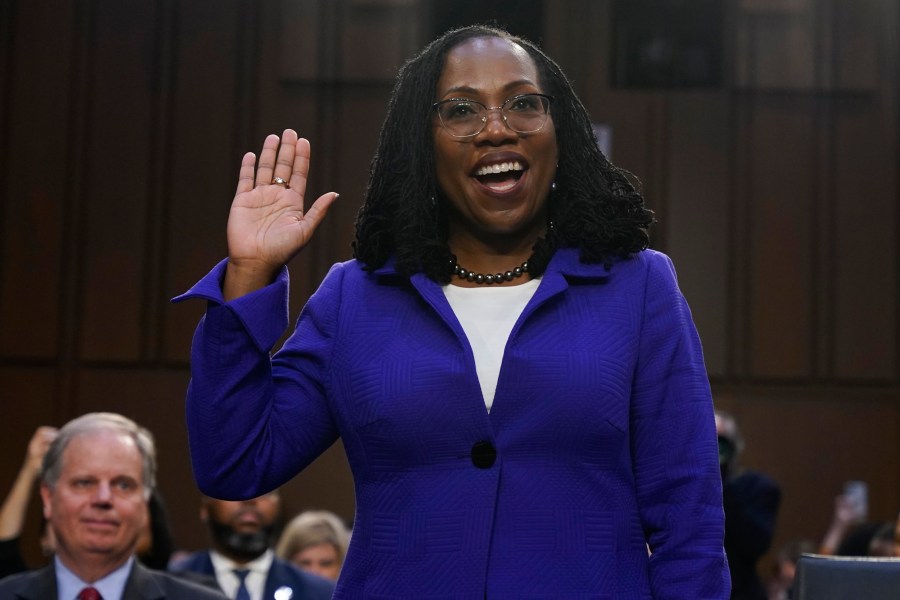