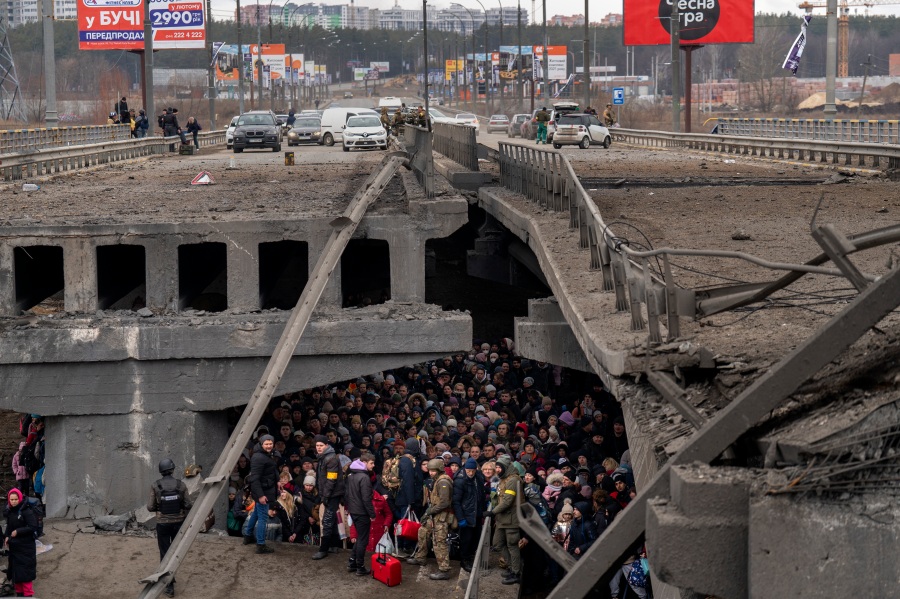 LVIV, Ukraine (AP) — President Vladimir Putin warned Saturday that Russia would consider any third-party declaration of a no-fly zone over Ukraine as participation in the war there, while Ukrainian officials blamed Russian shelling for breaching a cease-fire arranged in two cities to evacuate civilians.

The struggle to enforce the cease-fire in Mariupol, a strategic port in the southeast, and the eastern city of Volnovakha showed the fragility of efforts to stop fighting across Ukraine as the number of people fleeing the country reached 1.4 million just 10 days after Russian forces invaded.

Graham calls for ‘somebody in Russia’ to take Putin out

Putin accused Ukraine of sabotaging the evacuation and even claimed Ukraine’s leadership was calling into question the future of the country’s statehood, saying that “If this happens, it will be entirely on their conscience.”

Earlier, the Russian defense ministry said it had agreed with Ukraine on evacuation routes out of Volnovakha and Mariupol, the site of growing misery amid an ongoing assault that created desperate scenes at hospitals and raised the prospect of food and water shortages for hundreds of thousands of people in freezing weather.

In comments carried on Ukrainian television, Mariupol Mayor Vadym Boychenko said thousands of people had gathered for safe passage out of the city and buses were departing when shelling began.

“We value the life of every inhabitant of Mariupol and we cannot risk it, so we stopped the evacuation,” he said.

Before Russia announced the cease-fire, Ukraine had urged Moscow to create humanitarian corridors to allow children, women and the older adults to flee the fighting, calling them “question No. 1.”

Russian Foreign Minister Sergey Lavrov on Saturday said Russia was ready for a third round of talks on that and other issues, but he asserted that “the Ukrainian side, the most interested side here, it would seem, is constantly making up various pretexts to delay the beginning of another meeting.”

Diplomatic efforts continued as U.S. Secretary of State Antony Blinken arrived in Poland to meet with the prime minister and foreign minister, a day after attending a NATO meeting in Brussels in which the alliance pledged to step up support for eastern flank members.

In the wake of Western sanctions, Aeroflot, Russia’s flagship state-owned airline, announced that it plans to halt all international flights. except to Belarus, starting Tuesday.

While a vast Russian armored column threatening Ukraine’s capital remained stalled outside Kyiv, the shelling in Mariupol showed Russia’s determination to cut Ukraine off from access to the Black Sea and the Sea of Azov, further damaging the country’s economy.

Even in cities that have fallen to the Russians, there were signs of resistance – peaceful or otherwise. As homes in the northern city of Chernihiv burned from what locals blamed on the Russian shelling that’s targeted Ukraine’s urban areas from the start, Ukrainian officials released images showing a Russian plane they said was shot down there.

Presidential adviser Oleksiy Arestovich said the situation was generally quiet Saturday and Russian forces “have not taken active actions since the morning.”

Instead it was Putin who was most on the offensive with his comments warning against a wider war.

Ukraine’s president has pleaded for a no-fly zone over his country and lashed out at NATO for refusing to impose one, warning that “all the people who die from this day forward will also die because of you.”

NATO has said a no-fly zone, which would bar all unauthorized aircraft from flying over Ukraine, could provoke widespread war in Europe. But as the United States and other NATO members send weapons for Kyiv, the conflict is already drawing in countries far beyond Ukraine’s borders.

As Russia cracks down on independent media reporting on the war, major international news outlets said they were pausing their work inside the country. Moscow also blocked Facebook and Twitter,

And in a warning of a hunger crisis yet to come, the U.N. World Food Program has said millions of people inside Ukraine, a major global wheat supplier, will need food aid “immediately.”

Ukraine’s president was set to brief U.S. senators Saturday by video conference as Congress considers a request for $10 billion in emergency funding for humanitarian aid and security needs.

And the U.N. Security Council scheduled an open meeting for Monday on the worsening humanitarian situation. The United Nations estimates that 12 million people in Ukraine and 4 million fleeing to neighboring countries in the coming months will need humanitarian aid.

At least 351 civilians have been confirmed killed since Russia’s invasion on Feb. 24, but the true number is probably much higher, the U.N. human rights office has said. Russia said Wednesday 498 of its troops had been killed and has not updated since.

Elsewhere in the capital, in a sign of nerves near breaking point, two people on a sidewalk froze in their tracks at the sound of a sharp bang. It was a garbage truck upending a bin. 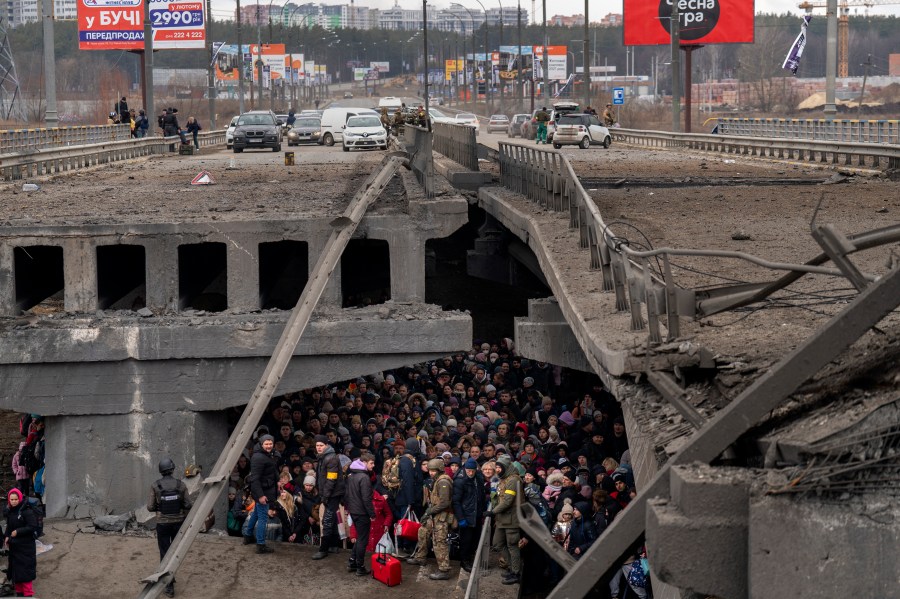