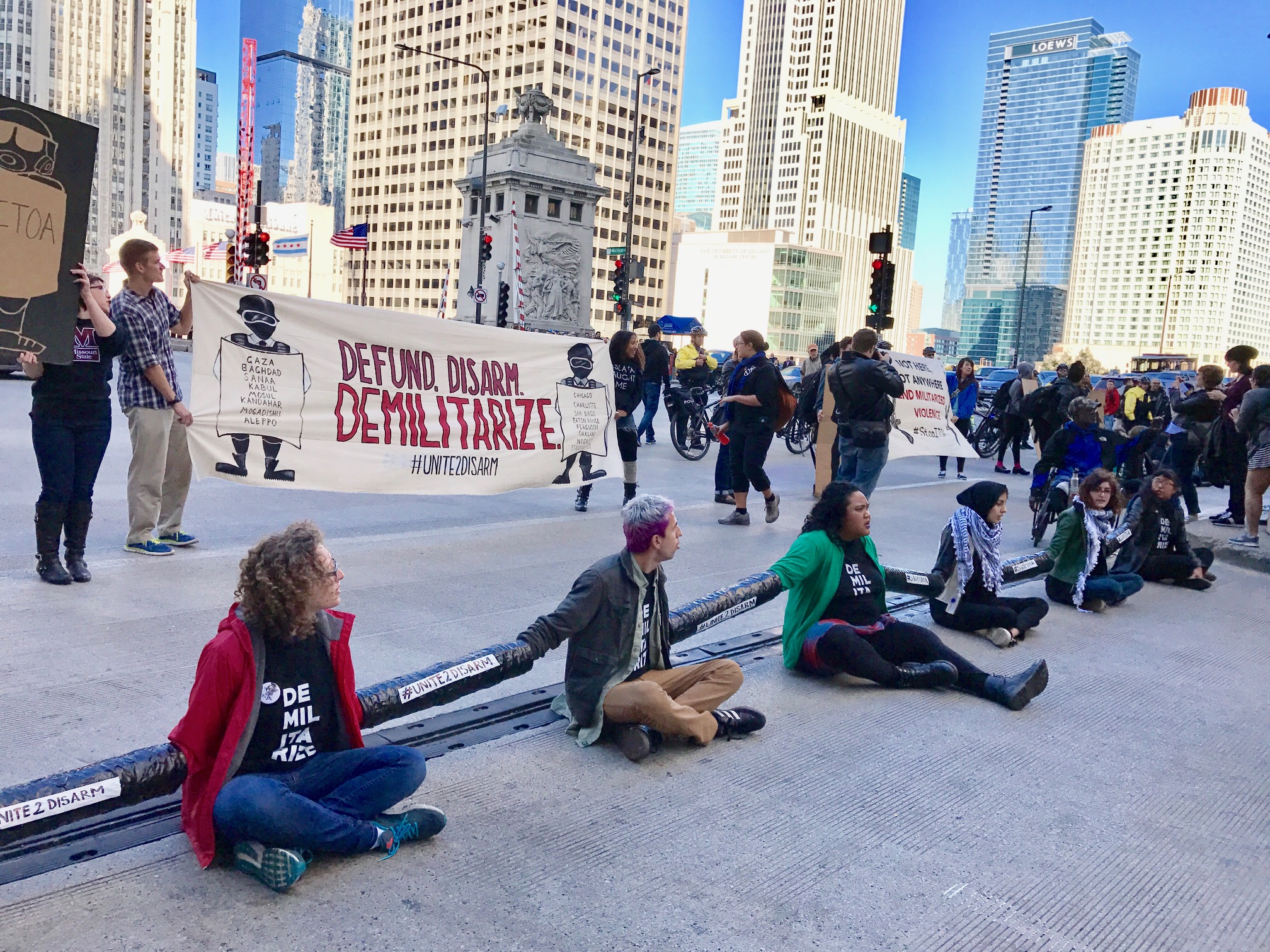 Youth representatives from multiple faith-based and human rights groups who sponsored the rally and march had already obtained 3,000 signatures on an online petition demanding that the Stonegate Banquet and Conference Center stop hosting the ITOA conference. One of the organizers indicated that attempts had been made to meet with the conference center manager without success. The rally at Millennium Park included speeches from the young organizers behind the #StopITOA campaign.

emphasized the ITOA conference giving police departments access to “more dangerous weapons on the belts of police officers and dangerous ideas into their heads…ITOA supporters capitalize on a culture of fear. This training actually represents an assault on the security and peace of mind of communities of color.”

Sofia put the ITOA conference into the context of military violence against across the globe. The tactics they teach are the “night raids used to disrupt the comfort and safety of the people of Pakistan and Iraq. These tactics and technology have been used elsewhere and now it’s coming here…People have been lost. There are always civilian casualties that are remembered by numbers, we never hear their names… Whenever you hear words like ‘public safety’ we need to question that. Public safety meaning more police. The answer is always more violence. Public safety – whose safety is that?”

Melisa Stephen, from For The People Artists Collective, questioned the government’s spending priorities. “We need resources for our communities, not the military-police complex. As another teacher strike in Chicago demands resources for our schools and more and more mental health crises and emergencies are responded to with military force and SWAT teams, the federal government pours tens of billion dollars into militarism and the use of force. Where are our priorities?”

The group marched down the sidewalks of Michigan Avenue ostensibly to protest at the Cook County Department of Homeland Security and Emergency Management (DHSEM) headquarters to “highlight the ways that Chicago taxpayers are subsidizing ITOA’s militarization and Islamophobia” but made some unscheduled stops along the way. The protestors stopped traffic at Michigan and Randolph by unfurling an orange

plastic fence across the road, but continued marching when the police arrived. Once the march reached Michigan and Lake Street, a number of protestors sat down across Michigan Avenue and were chained together. The Chicago Police SWAT team arrived and after about an hour working on freeing the protestors they were arrested and taken to the station. Fifteen were arrested, charged with obstructing traffic misdemeanors, and released later that same night.

One of the protestors explains the wider reach of their campaign against police militarization.

Yesterday 15 people were arrested shutting down Michigan Ave with a call to demilitarize the police | #StopITOA pic.twitter.com/7sjTX0oQJ0

In their statement of opposition to the ITOA conference, the #STOPITOA stated: “The Chicago Police Department has a history of collaborating with ITOA for tactical training, and ITOA has a long-standing relationship with the Cook County Department of Homeland Security. ITOA promotes its use of military tactics with toxic racism and Islamophobia…The conference will train local police and EMTs to operate ‘like tactical squads in the military’ and incorporate ‘new data and surveillance technology’ in their work, directly contributing to racialized law enforcement violence against communities of color in the Chicagoland area.

While Chicago is still reeling from budget cuts that have resulted in the closure of over 50 public schools, mental health clinics, and severe cuts to social services, the city spends over $4 million a day on the Chicago police alone. ITOA is directly involved in training and arming those police, even using empty school buildings as training grounds for Cook County officers. Weapons manufacturers from around the world also use ITOA to sell military-grade equipment to local police forces–equipment that shocked the country when it was deployed against civilians in places like Ferguson, Minneapolis, and Baton Rouge (and is used regularly by repressive governments such as Israel).”

Sebastian Gorka has been involved in training FBI and Special Forces personnel for a number of years. He was identified in a report by the Muslim Public Affairs Council as “one of the top 25 pseudo experts on Islam” along with Robert Spencer and Pamela Gellar.

“While he is a noted expert on post-Communist democratization in Eastern Europe, as well as defense and national security issues, he has no training in Islamic studies and has made biased comments about Islam.

For instance, in giving a backhanded compliment to Muslim Americans who helped law enforcement prevent a 2010 terrorist attack in Portland, Oregon, Gorka stated:

“It’s those Muslims who are American citizens who take the U.S. Constitution seriously and who believe in the values of the U.S. Constitution, those people who understand the best that shariah, for example, is antithetical to the values of this great nation. So I think absolutely, the local community and those people who are patriotic Americans, but also Muslims will be one of the most important sources of intelligence for us.” (Emphasis added)

Additionally he has stated that, “You can make the argument that Osama Bin Laden was the Martin Luther of Islam.”

Given the statements that Donald Trump has made about Muslims during the Presidential campaign, it is disturbing but not surprising that Gorka is his National Security Advisor.

But the protestors were also demanding that the Cook County Department of Homeland Security and Emergency Management stop providing funding and resources to ITOA training that includes educating local law enforcement on how to be anti-Muslim.

Before the protest, some #STOPITOA organizers reported harassment from individuals associated with the conference. After sharing a statement online about a teach-in on issues of police militarization in Illinois, they described many “trolls” making negative comments directed at one of the hosts of the Facebook event page. Another host began receiving multiple anonymous calls followed by immediate hang-ups at her workplace from a number in Maryland.

But the most disturbing incident was the following:

“Then, on the evening of Sunday, September 18th – less than a week after publicly launching the #StopITOA campaign – my office was broken into overnight, with several locks picked, multiple locked doors damaged, and drawers rummaged through. My laptop and cameras were the only items taken, despite being in a locked cabinet, while numerous other computers and expensive technology sat out in the open. Ironically, even CPD – who were called by the office manager to submit a police report for insurance purposes – acknowledged that I was the presumable target if only my belongings were taken.”

The organizers ignored the harassment and attempts at intimidation continuing their planning for the rally and protest.

The #STOPITOA group has also organized a call-in campaign to the Centre’s manager threatening a boycott of the venue until the Stonegate centre stops hosting the ITOA conference.