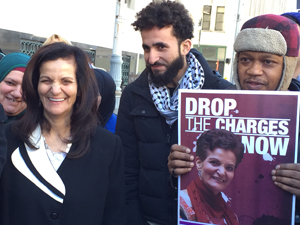 Attorneys for Rasmea Odeh, Arab community leader in Chicago, have filed an appeal of her November 2014 conviction for “unlawful procurement of naturalization.” Her defense team states “justice requires Rasmea’s conviction be reversed and she be afforded a fair trial.”

The appeal urges the court to reverse the conviction, arguing that Odeh was denied her right to present her complete defense, and that the trial court was wrong to allow prejudicial documents from Israel’s military court. It also calls on the appeals court to resentence her to no additional prison time (she was jailed for 5 weeks after the November conviction).

1) Odeh was not allowed to mount a complete defense.

The government case is based on the claim that Odeh unlawfully gained U.S. citizenship by giving false answers on her visa application in 1995 and on her naturalization application in 2004. The government claimed that she failed to disclose that she had been convicted by the Israelis of participating in bombings in 1969. This conviction in a military court was the result of a coerced confession made after she was tortured and raped by Israeli military authorities. As a result of that torture, Odeh has been diagnosed with chronic Post-Traumatic Stress Disorder, which, in the words of the appeal “blocked her from understanding the time frame in the questions that were answered falsely.”

At a court hearing on October 21 without the jury present, Judge Drain heard the testimony of the defense expert witness, internationally recognized, impartial expert on survivors of war trauma and torture, Dr. Mary Fabri. Dr. Fabri told the court that Odeh suffers from “chronic” Post-Traumatic Stress Disorder (PTSD) and did so at the time she filled out her citizenship application.  Dr. Mary Fabri has worked with torture survivors for more than 25 years; was Senior Director of Torture Treatment Services and International Training at Heartland Alliance Marjorie Kovler Center in Chicago for 12 years; served as President of the National Consortium of Torture Treatment Programs for 5 years and has been on the Board of Directors of Torture Abolition & Survivors Support Coalition (TASSC) since 2005 and is currently serving as the Chair. But Judge Drain decided not to allow any of Dr. Fabri’s testimony. As the defense appeal states, Dr. Mary Fabri, was prepared to present a

Solid, science-based, direct explanation and corroborations of [Ms. Odeh’s] state of mind, as a matter of fact, which would have established that she did not knowingly lie on the application.

In addition, Judge Drain ruled that Odeh could not testify about her experience with the military court, her torture, or her ongoing symptoms of PTSD.

As the jury was denied this critical evidence, “Ms. Odeh’s fundamental constitutional right to present her defense was thereby arbitrarily denied.”

2) Israeli military court documents should never have been allowed into evidence.

While testimony that might have benefited the defense was denied, all of the biased Israeli government documents from 1969 describing Odeh’s conviction in a military court by a coerced confession were admitted. As the brief states, Israeli military courts use “systematic use of torture, forced confessions, and other procedures wholly inconsistent with Due Process and U.S. principles of Fundamental Fairness.” Israeli, Palestinian, and other human rights organizations have continued to criticize the Israeli military court system even since a 1999 Israeli High Court ruling against torture. The Palestinian prisoner support and human rights association, Addameer, reports:

The use of physical pressure against prisoners and detainees is less common since the 1999 High Court ruling in The Public Committee Against Torture in Israel v. Government of Israel, which placed certain restrictions on the use of torture during interrogation. However, under the court’s decision, “moderate physical pressure” was allowed to continue in the “necessity of defense” and in “ticking time-bomb” cases. Despite the landmark court ruling, Israeli interrogators today continue to use forbidden interrogation techniques. As Israel can legally hold detainees incommunicado for up to three months, Israeli Security Agency (ISA) interrogators are able to use methods of torture with impunity.

As Michael Deutsche would explain in the livestream video session, the treaties between the U.S. and Israel that the prosecution used to justify the admission of these documents only discusses civilian court records, not those from military courts. The admission of these documents created a highly prejudicial atmosphere during the trial as the prosecution continued to discuss the details of the bombings and the names of those killed. The brief also argues these documents from Israel’s military court contained inflammatory language that unduly biased the jury against Odeh. This atmosphere was extended to those who came to support Odeh. The jury that convicted Odeh was not only shielded from all of the evidence concerning Odeh’s case, but they were also “shielded” from Odeh’s supporters (or the “protesting mob” as prosecution documents called them) by being partially sequestered and having armed marshals in the courtroom.

3) The sentence was unfair and unjust.

The defense also argues that the 18 month prison sentence should be thrown out due to Judge Drain failing to apply standard sentencing guideline adjustments in consideration of Odeh’s age, her chronic PTSD, and her over ten year contributions to the Arab community in Chicago. At the very least if the verdict is not overturned, the defense believes Odeh should serve no additional jail time.

On Thursday, June 11, Rasmea Odeh and her attorney Michael Deutsch appeared on a livestream video to multiple supporters in more than 28 locations in the U.S., Canada, and New Zealand to further explain the appeals process and what will happen next in her legal battle. During the livestream video, Michael Deutsch made it clear that they have asked the appeals court to allow oral arguments in the case, but it is not definite that they will be allowed. As the appeal states

This case should not be submitted without oral argument…the facts contained in this appeal are unique, and raise fundamental complex constitutional issues of the right to present a complete defense.

If oral arguments are allowed, it can take one to six months after the arguments for a decision. As explained by Michael Deutsche, there are a number of options that the appellate court can take.

On the livestream video, Rasmea Odeh thanked her supporters for attending the update on her case.

Your support gives me important strength continuous to allow me the resilience to achieve justice and help get me out of jail. Now we will continue to organize to win the appeal of my conviction.

Rasmea Odeh is a hero, our hero, and as we’ve said for almost two years, she has come under attack only because she is a Palestinian who has dedicated her life to the liberation of Palestine. We expect that the appeals court will hear oral arguments in Cincinnati in September, and hundreds of her supporters will be there with her, as we were throughout the trial.

The Rasmea Defense Committee and other organizations including Black Lives Matter Chicago, Black Youth Project 100, Chicago Alliance Against Racist and Political Repression, Southside Together Organizing for Power / Fearless Leading By the Youth, and the United States Palestinian Community Network are holding an event titled “Freedom Beyond Incarceration and Occupation: An Afternoon with Angela Davis and Rasmea Odeh” on June 28 at University of Illinois Chicago.