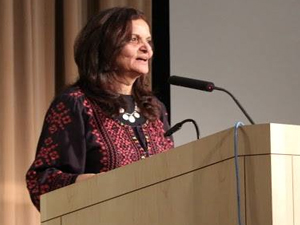 On Tuesday, February 3rd, Students for Justice in Palestine’s (SJP) Chicago network successfully hosted a fundraising dinner for Palestinian community leader Rasmea Odeh at DePaul University. The event had an overwhelming turnout despite the snow, security issues, and threats from opposition groups. More than 200 guests packed the Student Center’s largest venue to support Rasmea in her current legal case.

Rasmea Odeh is a 67-year-old Palestinian community leader who has worked with the Arab American Action Network (AAAN) on the southside of Chicago since 2004. Rasmea is currently the associate director of the AAAN. She also established the Arab Women’s Committee that has helped hundreds of immigrant women assimilate into the United States. She is a strong beloved leader in her community and has been an icon in Arab-American history in Chicago.

On October 22nd, 2013, Rasmea was arrested on charges of falsifying immigration information. She was indicted in federal court that same morning, charged with Unlawful Procurement of Naturalization, an allegation based on answers she gave on a 20-year-old immigration application. In particular, she was charged because she answered “no” when asked if she had ever been arrested or convicted.

Rasmea was arrested and convicted in an Israeli prison for a supermarket bombing that happened in 1969 in Israel, which she says she did not commit. Rasmea was arrested during a mass arrest of hundreds of Palestinians. She was forced to confess to this allegation after enduring 25 days of rape and torture at an Israeli interrogation center. Rasmea was put on trial in an Israeli military court, in which the conviction rate for Palestinians is over 99%. Despite her lifetime prison sentence, she was released after ten years in a prisoner exchange. Rasmea eventually moved to the US and became an active citizen and member of the community. Many years later, Rasmea was put on trial once again in a Detroit federal court.

In November of 2014, Rasmea was found guilty by a jury in Detroit of her immigration charge. Rasmea was portrayed to the jury by the prosecution as a terrorist. Rasmea’s bombing conviction in 1969 was discussed, but evidence and discussion of her rape and torture experience was not allowed in court. After Rasmea was found guilty, she was immediately arrested and imprisoned, including time in solitary confinement, before being released in December on a $50,000 cash bond.

The goal of the fundraising dinner was to help raise money for Rasmea’s legal defense fund. Prior to the fundraiser, DePaul’s administration contacted SJP and required that the student organizers pay security for the event, which is a rare occurrence. According to the administration, concerned students reached out asking that security measures be taken. Letters were sent to DePaul demanding that the university cancel the fundraiser, dehumanizing Rasmea and calling her a “terrorist”. Most notably, the Zionist Organization of America sent a letter addressed to President Father Holtschneider urging him to condemn SJP and the fundraiser.

DePaul’s perceived need for security increased exponentially when it became clear that the opposition would be holding a counter-protest and vigil. The university then claimed that security was for SJP’s protection. Despite the fact that DePaul’s public safety officers are already employed by the university to protect students, SJP was still required to pay separately for contracted security.

On the day of the fundraiser, about 20 anti-Palestinian protesters held a vigil in front of DePaul’s Student Center in remembrance of the two men Rasmea was wrongfully convicted of killing in a supermarket bombing in Israel in 1969, ignoring the fact that Rasmea’s conviction was obtained through rape and torture.

Despite the various obstacles that SJP Chicago faced while organizing the event, the fundraiser for Rasmea raised over $5,000 in ticket sales and donations for Rasmea’s legal defense fund. One of Rasmea’s lawyers, as well as a member of her defense committee, gave an overview of Rasmea’s history and current case. The event also consisted of an entertainment portion, including spoken word and a comedy performance by Palestinian-American comedian Amer Zahr. T-shirts were sold in honor of Rasmea designed by DePaul student, Leila Abdelrazaq, that were made using fair trade practices in Palestine.

After the program concluded, Rasmea got on stage and addressed the crowd. She told the audience about her experience in solitary confinement in a Michigan jail and how the community’s support kept her strong. “When I was incarcerated, it was your support that helped me defeat the sealed, frozen, and isolated cell,” she said. After she concluded her brief speech, she joined the community in dabke, a traditional Palestinian dance.

Rasmea’s sentence hearing will be held in March 2015 in Detroit. To learn more about Rasmea’s case and how you can support, please visit her support website or follow @Justice4Rasmea on Twitter.

Adeeba M. is a Palestinian-American from Chicago. She is an alumni of DePaul’s Students for Justice in Palestine and a member of the SJP Chicago Network.