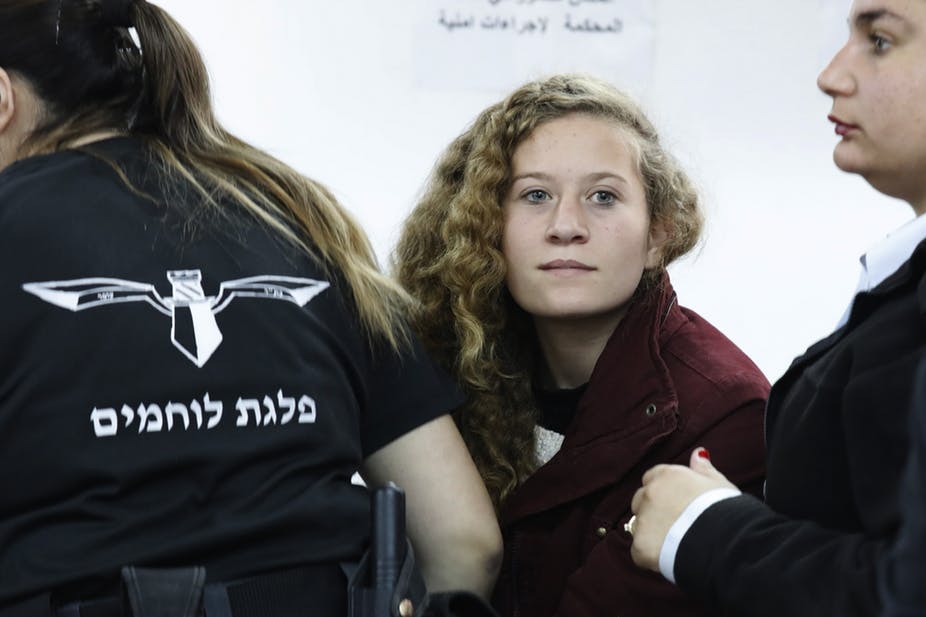 Many countries in our world are going through wars and conflicts that unfortunately leave children as the most wounded entity in the equation. The Global Charity said in a report that at least 357 million children – or one in six worldwide – were living in conflict zones, an increase of 75% since the early 1990s.

Children in the Middle East are most likely to be living in a conflict zone, 40% of children in the region followed by Africa with 20%, are living in war-torn areas. Palestinian children, in particular, suffered immensely during the past 70 years of Israeli occupation. They have been disabled from living on their own land.

Mohammed Al durrah, Mohammed Abu Khdeir, Ahed al-Tamimi, and Fawzi Al-Junaidi are just some of thousands of children who were killed horribly, wounded aggressively, or imprisoned despite their young age. Israel is making sure Palestinian children are disabled from living although they don’t have any disability.

Since 2000, 2,000 children were killed by Israel in Palestine and 8,000 were arrested. There is no count for the children whose rights and lives have been violated without mercy, their childhood and innocence stolen.

In 2015, Israel has lowered the minimum age of criminal responsibility, allowing Palestinian children as young as 12 to be arrested and charged. Israel is the only country in the world that automatically prosecutes children in military courts that lack basic and fundamental fair trial guarantees.

Kids are not just being imprisoned. There are some allegations regarding the use of brute force, restraining children in cruel ways, withholding food and water, violence and verbal aggression during interrogation and forcing confessions, among others.

60% of Palestinian children who were detained by Israeli occupation forces were verbally, physically, or psychologically tortured. The Palestinian Prisoners’ Society (PPS) revealed Mustafa al-Badan, 17, Faisal al-Shaer, 16, and Ahmed al-Shalaldeh, 15, were tortured when they were investigated.

Rights  groups say some of the teens behind bars are interrogated, beaten, and made to confess to minor offences.

After sentencing, nearly 60% of Palestinian child detainees are transferred from occupied territory to prisons inside Israel, in violation of the Fourth Geneva Convention. The practical consequence of this is that many of them receive either limited or no family visits due to freedom of movement restrictions and the time it takes to issue a permit to visit the prisons.

Cases and conditions
In February of 2016, Omar Al-Rimawi, 14 years old, was arrested for stabbing an Israeli soldier and killing him. The news shocked Omar’s parents, who knew Omar was a bright boy and an athlete who excelled in football, swimming and karate in the school.

Omar was not only arrested, but the Israeli soldiers shot him 3 times from 0 distance in his right arm, spine and the last one near his heart. The only bullet that was removed was the one in his right arm.
After 3 years in prison, in Jan, 2019 Omar’s trial was postponed for the 30th time, and till this day, Omar is still in prison without a trial.  He only meets his parents once every 3 months.

On the 19th of December 2017, Ahed Al-Tamimi or, as she is called “Lioness of Palestine” was arrested at the age of 16. She was detained by Israeli authorities, during the night, for slapping a soldier who was standing as a guard outside her home 4 days before. The arrest of Ahed sparked an international outrage. Ahed was released on July 29th, 2018, and determined to study law and “hold the occupation accountable”.

In that same month, photographer Wisam Hashlmoun witnessed the moment when a group of Israeli soldiers arrested and blindfolded the Palestinian child Fawzi Al-Junaidi (16 years old). This happened in occupied Hebron during a protest against the US decision to recognize Jerusalem as the capital of Israel. Fawzi was beaten by the Israeli soldiers and was charged for throwing stones at a group of soldiers, but he denied the allegations. Fawzi was released after 3 weeks, suffering from a dislocated shoulder and bruises.

In November, 2018, two of the youngest Palestinian prisoners, Shadi Farrah and Ahmad al-Zatari – both aged 15 – were released after three years of detention.

The two boys were held at a checkpoint for about an hour. Afterwards security forces transferred Abu Daoud to a police station and then to Ofer Prison, where he was kept in custody as a detainee until December 2nd, 2018. There, he was sentenced to three months in prison and given a fine of NIS 500 (New Israeli Shekel, close to $140).
The Israeli Regulations state that, “Any person who throws a stone in the direction of an object or person can be sentenced up to 10 years in prison.” But with the children, the case is different, they are being prisoned between 2 weeks up to 10 months.

Zeid Taha told B’Tselem researchers “they kept me shut in a room there for about an hour. I cried and the soldiers cursed me. Then they put me into a white car. I heard the other boy who was arrested with me asking a woman soldier where they were taking us, and she answered, ‘To prison.’ “.

Then the officers drove him in another vehicle and took him to another checkpoint the boy didn’t know. Then they moved him again, this time to Bab a-Zawiya Checkpoint, where he was handed over to the Palestinian police from where his mom and uncle picked him up. Since then, Zeid’s mother said “Zeid is still very scared and anxious. He’s not ready to be apart from me even for a moment. He isn’t even willing to sleep in his own bed. He sleeps holding on to me.”

Children are being taken not only during protests and demonstrations, but also in the middle of the night by armed Israeli soldiers from their beds or during the day from their schools
On March 20th, 2019 Israeli soldiers broke into Ziad Jaber School in Hebron to arrest a 10 year old boy accusing him of throwing stones at an Israeli military jeep.
The school principal and counselor tried to stop the soldiers from arresting the student but the soldiers attacked them when they tried to. Every time I see the horrible conditions Palestinian children are going through, I remember the famous Handala character. Handala was created by the artist Naji Al-Ali as a symbol of the Palestinian children resistance of the occupation of Palestine. Handala resembles a ten-year-old who was forced to leave his homeland and would not grow up until he could return back. His turned back and clasped hands symbolizing the character’s rejection of injustice in the world. Handala wears ragged clothes and is barefoot, symbolizing his loyalty to the poor. Handala is a symbol for all oppressed children in the world.
Naji Al-Ali said “at first, he was a Palestinian child, but his consciousness developed to have a national then a global and human horizon. He is a simple yet tough child, and this is why people adopted him and felt that he represented their consciousness.”

A saying by Thomas Jefferson, “When injustice becomes law, resistance becomes duty”, explains it all. The reaction of children who were born and raised under occupation and injustice is justifiable, but what is not justifiable is Israel behavior that mentally and physically disabled children who did not commit a crime except being Palestinians.

These names are just a few, these conditions are just a few.
54% of Palestinian boys and 46.5 percent of Palestinian girls, aged 6-12 years old, are estimated to have emotional and behavioral disorders. Children are going through hell; in their daily lives, they are aware of the threat of Israel, that any day their turn to suffer could come, like their friends, family, and loved ones suffered before them. Israel disabled these children and made them live with fear for the rest of their lives. It’s not the known PSTD (Post traumatic stress disorders), it’s beyond it.