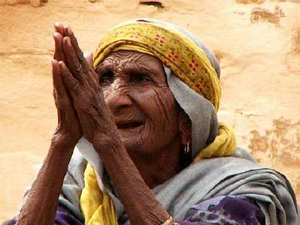 As a Pakistani-American connected with her roots, I feel strongly about the political and socioeconomic situation in the country. With the general election approaching on May 13th, Pakistanis at home and abroad are closely following updates and news reports about the political happenings there. Most Pakistanis are certain they want a drastic change from the status quo with unemployment on the rise, an increase in sectarian violence, and enduring political instability.

When I think about Pakistan, I am overwhelmed with pain. Not physical but emotional, psychological, an instinctive gut-wrenching, heart-sinking kind of pain, which never leaves. Pakistan has changed in the 13 years since I’ve been there.

More people are dying of unnatural causes caused by sectarian violence, showing up in body bags, strangled or tortured or stabbed or shot. Women are becoming widows, children are becoming orphans, and men are becoming desperate for work. Youth are becoming hopeless and burning tires on the streets.

There are less than 12 hours of electricity in some places. Buildings are collapsing because of architectural faults, or earthquakes, or arson, or bombs. Suicide bombers are targeting civilians exclusively, as if exacting vengeance on them for breathing, for trying to survive. There is less land for graves. Food and gas prices are increasing often and without explanation. Such an atmosphere is inspiring anger and disappointment at Pakistan’s President, with most Pakistanis eager to leave the country and settle abroad.

Pakistan’s current President, Asif Ali Zardari, has such a track record of corruption that he has been widely known as “Mr. Ten Percent” for charging those who ask permission for government loans or favors a commission worth ten percent of the loan. Thanks to receiving kickbacks from almost every ministry of the government, Zardari has accumulated an obscene amount of wealth, and is a billionaire with homes in England, Dubai, Manhattan, and three Pakistani cities. Research suggests that most of his assets were acquired through offshore banking with overseas companies not under his name while his wife Benazir Bhutto was Prime Minister of Pakistan. During his tenure, Zardari’s government received more than 600 billion rupees in loans and gave tax exemptions to his closest confidantes and political allies.

Political and social elites, like Zardari, are responsible for creating chasms of economic, intellectual, and social inequality, gaps which cannot be filled in at least this generation. This month, Zardari supporter and political elite Sharmila Farooqi (advisor to the Chief Minister of Sindh, Qaim Ali Shah) got engaged in a lavish ceremony in Karachi and reserved most of the city’s security personnel for the night. The same night, a bomb blast ripped through a working class neighborhood called Abbas Town, killing 48 people and injuring hundreds. Hundreds more lay buried under the rubble of destroyed apartment buildings with little help from local authorities, as said authorities were occupied protecting those deemed more important.

This is the tip of the iceberg, the icing on the glacial cake that constitutes inequality in Pakistan. The ruling class of Pakistan educates their children overseas in London, New York, or Dubai while kids in Pakistan have barely a roof to call a classroom. They plan and perform destination weddings while unmarried girls in villages aren’t even given the right to love who they choose to. Families are mugged on the street, cell phones are snatched, and jewelry is grabbed off of women’s hands, ears, and necks. Babies are being kidnapped and used to sell drugs, or steal. Food and medicines are tampered with, bricks are crushed to make red chili powder, and people die of taking fake cough syrup. The past five years have seen the Pakistani rupee’s value plummet from the rate of about 62 rupees/ $1 to almost 100 rupees/ $1.

This is democracy. The one we hear about daily on Urdu news channels. We are expected to comply with it, deal with it, get used to it. Otherwise, we always have the option to become a brain drain generation, leave Pakistan to find work and peace in the US, England, Australia, Germany. Then, we can forever spend the rest of our lives pining away for better days. Or we can donate to social activists, who have taken matters into their own hands, like Shehzad Roy, Salman Ahmad, Edhi, or Mir Khalil-ur-Rahman in hopes that they might accomplish all that we never could.

This is democracy. The one in which a crook is elected President or Prime Minister, automatically entitled to respect and devotion. One wonders if he thought about the millions starving in his own country, who he could give jobs, while he was accumulating more wealth and compounding the nation’s debt, begging for more and more from the US, and smiling and shaking hands with the West. One wonders how Quaid-e-Azam, the founding father of Pakistan whose picture Zardari sits in front of in the Presidential House, feels about the responsibility of running a nation being given (or maybe it was snatched by Zardari, who knows? He does have a fond relationship with thievery) to those incompetent and apathetic, those who have no real sense of ethics and justice, and those who have ravaged the nation left and right.

I wonder how Zardari is able to sleep peacefully at night with the full knowledge that he is crushing the people of Pakistan. Zardari may seem especially bad but the reality is that he is a product of a system which rewards criminal behavior. How else can one explain how a man can lie, cheat, and steal his way into a position of power only to exert unchecked authority over all, ultimately to take advantage of the underprivileged, the poor, the hungry, and the infirm?

I can’t blame him fully, because such devastating, harrowing conditions which Pakistan is currently under, cannot be caused by a single entity. They have multiple reasons and actors involved and decades of history. Pakistanis themselves are the biggest actors, the natural-born performers, the ones who have conditioned themselves to be whomever they needed to be in a certain situation. No electricity? That’s no problem! We can buy generators! Not enough space for garbage disposal? It’s alright, we can just dump it in a street corner, who will notice? Unequal opportunities for education? That’s not an issue, let’s create expensive English private schools for rich kids and keep ‘Urdu-medium” less expensive schools for poorer kids! Let’s divide Pakistanis along religious, ethnic, linguistic, and class lines! Divide and conquer, as they say.

We Pakistanis are so used to ignoring problems instead of fixing them and avoiding proper solutions that our entire country stands on the brink of collapse. On one hand, we have landowners who control villages with their monetary wealth, and secure reelection after reelection, bribing simple-minded villagers with a few thousand rupees. They rule with an iron hand, and are treated as gods on earth, drunk with the power to kill who they please. They accumulate wives like sportsmen do trophies and make their money off the sweaty backs of farmers. On the other, we have the bureaucracy, the so-called “civilized” society, mired in corruption and dirty money. These civil servants, officials, and ambassadors enjoy special privileges gifted to them by the heads of state and hire relatives and friends in positions of power with no second thoughts.

How can we, as Pakistanis, then blame the Obamas and Bushes of the world, when we ourselves are hell-bent on destroying our own country, reveling in its destruction like a child trying to cut off his own arm? Is it then entirely reasonable to expect Obama to not send drones into Pakistan when we are billions of dollars in debt with the US? How can we point fingers at outside influences when, ultimately, we are pointing at ourselves?

We Pakistanis must wake up as a nation and start taking responsibility for our country. We must establish law, order and accountability in the nation. Acts of terrorism must be dealt with immediately and the strictest punishment must be given to those responsible. Landowners’ powers must be lessened significantly and they must be kept out of the political process. We must make it possible for the average Pakistani to have a voice and a say in government. We must not keep politics inaccessible to those without millions of rupees or estates at their disposal. We must start taking advantage of our natural resources and increase investments in agriculture. We must strictly collect taxes from our population, especially the elite class. Most importantly, we must stop asking for loans from entities like the IMF or countries like the US.

These are not unrealistic goals or expectations. I believe that it is possible for Pakistanis to take charge of their lives and stop depending on supposed figures of authority to solve their issues. It might take a generation but we must start now. Pakistan’s future is in our hands and if we do not secure it, we will have lost the opportunity to make a decisive change not just for Pakistanis, but for the world.