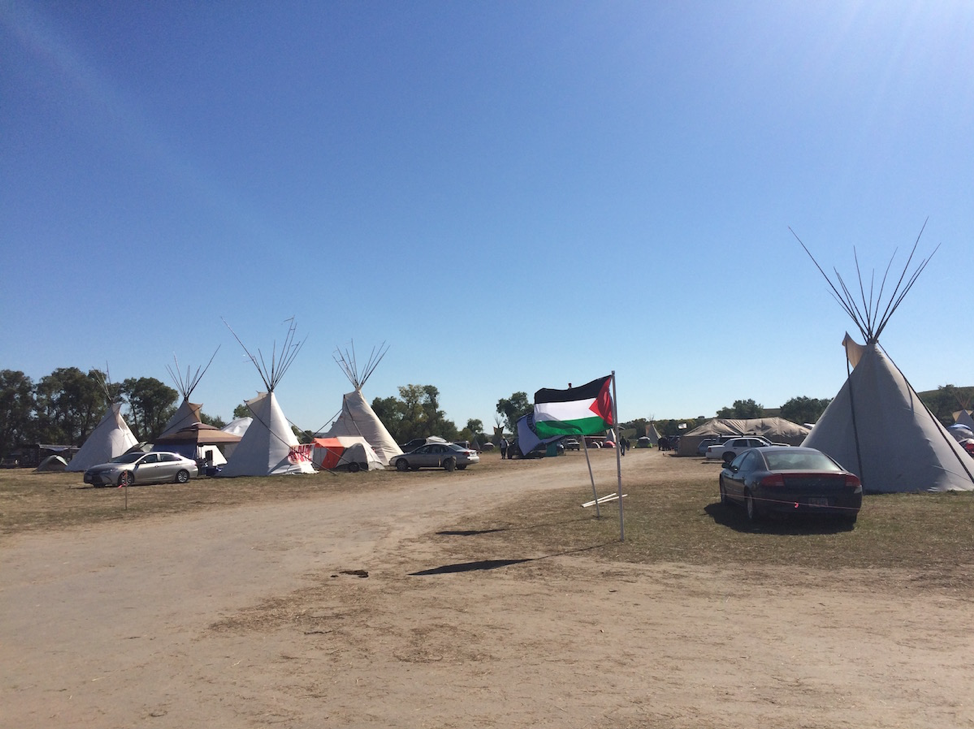 As protests against the construction of the Dakota Access Pipeline (DAPL) continue, teepees, tents, and Palestinian flags used during the protests depict the joint-struggle solidarity among two oppressed indigenous populations, Native Americans and Palestinians. As the people of an occupied land, Palestinians are no strangers to the consequences of settler-colonialism.  Years of massacres, displacement, and environmental destruction in Palestine depict the oppression inflicted by a colonizing force. These travesties also emphasize the need for oppressed groups to stand in solidarity with other indigenous communities combatting similar struggles—in this case, the Native Americans. “Anyone can understand but [the Palestinians] know,” said Taylor from Lakota Youth, in regards to the DAPL protests. Taylor emphasizes how years of colonial occupation has allowed Palestinians to relate to the plight of Native Americans. The related suffering, inflicted by settler colonialism, of these two indigenous populations emphasize the need to unite to combat present day issues, like the construction of the Dakota Access Pipeline.

One of the needs for solidarity among Palestinians and Native Americans is highlighted by the fact that both peoples are challenged by similar adversities. Palestinians and Native Americans are both victims of settler colonialism. Settler colonialism is the invasion of a land by foreign settlers with the intent to replace the indigenous population. Rather than co-existing with the indigenous population, the settlers intend to erase colonial differences by creating a dominating, supreme super state that systemically oppresses the native people by encouraging acts of land confiscation, displacement, genocide, racism, violence, etc. By creating a supreme state and preserving their identity, the colonizers are able to erase the history of the indigenous people. They are able to maintain their wrongful control of the land through the means of propaganda—they create and spread fictitious narratives of the indigenous people being savages and paint themselves as the only means of technological, economic, or industrial development.

In the case of Palestinians, settler colonialism manifest through illegal Israeli practices and barriers: building settlements through land seizures and expansions by eminent domain, manning checkpoints created to restrict Palestinians’ movement, invading privacy (e.g., home surveillance and intrusions), enforcing discriminatory policies (e.g., stop and frisk), spreading propaganda of Palestinians being terrorists, etc. Native Americans undergo similar policies of systemic oppression inflicted by settler colonialism. Similar to the Palestinians, past examples include the confiscation of Native American land and stories that white wash their history by portraying the settlers as saviors and Native Americans as uncivilized. White settlers have also oppressed Native Americans by spreading diseases that have killed 90% of the Native American population, by banning Native languages in schools, and by denying them health care.

Native American resistance against systemic violation of indigenous land rights is a recurrent narrative. In the 1870s, the U.S. government broke treaties between the Sioux Tribe in order to seize their land during the Black Hills Gold Rush in Dakota Territory.  The government forced cessation of the tribe’s land again during the 1950’s and 1960’s. The confiscation of land from the Sioux Tribe is catastrophic due to the fact that their lifestyle is economically dependent on agriculture (i.e., farming and land). The cessation and destruction of their land has forced the Sioux tribe into poverty. “More than 40% of the reservation’s population has an income below the federal poverty line, compared to 13.8% for the U.S. on average. Indian Country Today put the unemployment rate at Standing Rock at a shocking 86% in 2013, and many of the Sioux are without electricity, running water, or complete kitchens, per a 2012 economic outlook report prepared by the tribe.” Currently, Native Americans struggle with halting the construction of the Dakota Access Pipeline.  The DAPL is a “project that proposed a 1,172-mile pipe that would shuttle half a million barrels of North Dakota-produced oil to refining markets in Illinois.” The route of the construction of the pipeline includes the sacred burial sites of Standing Rock’s Sioux Tribe. The pipeline would also disrupt wildlife protection zones. It would cross and possibly contaminate the Missouri River- a source of drinking water for the nearby tribes as well. The creation of the pipeline demonstrates how the effects of settler colonialism violate the rights of Native Americans. The creation of the pipeline would destroy sacred land, violating the Native American Graves Protection and Repatriation Act of 1990. The 1978 American Indian Religious Freedom Act (AIRFA) is also being violated; this act allows Native Americans to practice their religion on their land without government interference. By violating these acts, Native Americans are being systemically oppressed by a supreme force and power is controlled by those not indigenous to the land.

The Native American struggle against the DAPL’s construction demands the attention of not only Native Americans, but Palestinians as well. As indigenous people that suffer the consequences of settler colonialism, Palestinians must be active in supporting individuals that are combating similar issues in hopes of drawing attention to their plight and attempting to halt any further colonization (e.g., land confiscation or implementation of discriminatory policies).

The Palestinian Youth Movement captures the imperative need for solidary between the Palestinians and Native Americans by releasing this statement:

“As Native communities face an ongoing genocide and continue to resist the imperialist settler-colonial regime of the United States, and Palestinians are too experiencing a genocide and ethnocide within our homelands from the settler-colonial state of Israel. Native communities have been displaced and relocated, just as Palestinians face mass internal displacement, home demolitions and life in exile from our homeland. Native communities continue to face the destruction and degradation of their land and water with restricted access to resources and delegitimization of sovereign authority and of treaties. As Palestinians in the United States, we are exiled from our homeland while living as settlers upon Turtle Island. It is imperative that we demand recognition of the rights of Native nations and their people while building movements together with one another so that we can strengthen our collective call for justice. We call for an end of the Dakota Access Pipeline. We demand that the United States honor the treaties as the supreme law of the land and payment of governmental reparations.”

Palestinians also must have a greater role in protesting the construction of the Dakota Access Pipeline due to the fact that they have been the victims of similar violence utilized by law enforcement and the National Guard against Native American protestors. For years, Palestinians have been subjected to injustices inflicted by the Israeli Defense Forces (IDF): they have been pepper sprayed, shot by rubber bullets, and attacked by dogs trained by the IDF. Native Americans are currently facing similar abuses by the officers and soldiers at Standing Rock, and this is not an incidental phenomenon. The United States and Israel currently have an exchange program in which, “‘worst practices’ are shared to promote and extend discriminatory and repressive policing practices that already exist in both countries, including extrajudicial executions, shoot-to-kill policies, police murders, racial profiling, massive spying and surveillance, deportation and detention, and attacks on human rights defenders.” U.S. police officers, armed forces, and other para-militarized personnel that participate in these programs include those who work against movements that promote social justice causes for indigenous people, such as Standing Rock. These officers have begun to use brutal police techniques similar to the ones used by IDF soldiers against Palestinians. The similarities in police techniques used against the Palestinians and Native Americans emphasize the need for the two indigenous groups to stand in solidarity to protect their land from militarized violence.

As the number of social justice movements continue to increase, there must also be increase in solidarity efforts between members of indigenous groups. Palestinian and Native American solidarity is essential in promoting movements that combat human right abuses stemmed from settler colonialism. By protesting the construction of the Dakota Access Pipeline, both groups are able to draw attention to wrongful land confiscation, police brutality, and legal violations—issues that both indigenous communities struggle with. By emphasizing these injustices, Palestinians and Native Americans are able to protect their homeland from further injustices and create a unified voice to support other indigenous struggling with similar issues around the world.